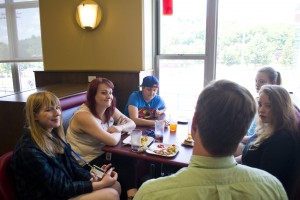 The students, all of whom attend “further education” colleges in Northern Ireland, are participating in Frontiers II, a WPI summer program that offers high school students the opportunity to participate in robotics, engineering exploration, global sustainability, or the Women’s Leadership Academy. The program runs until Aug. 1. Frontiers II has run for about six years at WPI while the flagship session of Frontiers has run for 32 years.

I’m learning about confidence, networking, and how to make yourself stand out.
Chelsie Gray
Northern Ireland student

Between the two Frontiers sessions, approximately 250 students participate in this selective program each year and many end up applying to WPI. This year’s freshman class, for example, will include 50 Frontiers alumni.

Suzanne Sontgerath, co-director of the Frontiers program and associate director of Admissions at WPI, said the students are able to interact with other students from six countries and 15 states. “This has been a longstanding important program to WPI, to make sure we’re reaching out to K-12 students to get them excited about STEM,” she said.

Then in March, Northern Ireland leaders, led by Stephen Farry, Minister of the Department for Employment and Learning in Northern Ireland, visited WPI to gain a deeper understanding about WPI’s STEM programs and form a partnership with WPI.

“We agreed at that time that we’d like to form a partnership,” said Justin Kerr, a member of the Skills Policy Branch of the Department for Employment and Learning. “There is so much for us to learn here at WPI.”

Kerr noted that Northern Ireland officials want to create 20,000 new STEM jobs by 2020. “We know it’s ambitious, but we want to set our sights high,” said Kerr. “To have the economy that we want we need to have these types of STEM jobs.

On a recent day, the Northern Ireland teen-agers expressed excitement about their WPI experience.

Chelsie Gray, 18, said she is particularly excited about the Women’s Leadership Academy. “I really like the program because it teaches you to get yourself out there and make yourself heard,” she said. “I’m learning about confidence, networking, and how to make yourself stand out.”

Belfast native Rhiannon Boyd, 17, said there is a “big push” at her high school because there are few people in that region pursuing STEM jobs. “Especially where I live in (Belfast), where the shipyard used to be, there’s nothing there anymore and there should be more industry,” said Boyd.

Jonathan Mitchell believes his country can fulfill the STEM jobs mission. He wants to be a computer programmer in running programs and software in the field of information communication technology. He has already created a sports quiz app that involved video and interaction.

And so far, he’s enjoyed his WPI experience. “We were learning about the forces of nature in robotics and torque issues,” Mitchell, 17, said during a break in a class taught by Ken Stafford, director of the Robotics Resource Center. “This has been a really good learning experience, and I can’t wait to find out what we’ll be learning about in the next couple of weeks.”

Stewart Matthews, first secretary of the Northern Ireland Bureau in Washington, D.C., which seeks ongoing diplomatic ties with North America, agreed. “Beyond the specifics of education in STEM, the wider social experience is important,” he said. “There are only 1.8 million of us in Northern Ireland, so to see the wider world is really beneficial.”