How long does it take for a 75-foot-tall maple tree to disappear from Reunion Plaza? 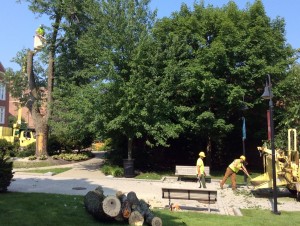 Three hours. That’s how long it took a crew from Bartlett Tree Experts to dismantle and grind up a silver maple that had been growing for an estimated 60 years on a plot that now lies between two walkways near Olin Hall and the Rubin Campus Center.

The tree, which was struck by lightning on the night of July 23, was assessed the following day by WPI grounds personnel and Bartlett employees, who found that it had sustained too much structural damage to remain in such a busy part of campus.

“It’s always sad to lose a healthy tree,” said Jeffrey Hehman, local manager for Bartlett. Based on what he observed, Hehman said that when the lightning bolt hit, the current travelled through the moist cambium layer under the bark. The electrical discharge instantly turned the moisture to steam, blowing large sections of bark off the trunk.

“We knew there was major structural damage,” Hehman said. “We have to err on the side of safety.”

On Friday morning a crew from Bartlett arrived with a crane that was parked next to the fountain. As a worker in a bucket truck attacked the tree with a chainsaw, the crane operator grabbed the cut limbs and lowered them to a pair of workers situated in front of Olin Hall. They. in turn, fed the limbs into a wood chipper. Before the lunch hour was over, all that remained were a half dozen sections of the trunk piled together and the stump, which measured almost 40 inches across.

While the tree will be missed, Hehman sees an upside to its removal.

“This isn’t a spot where you would want to put another shade tree,” he said, motioning to the stump, surrounded by flowers and rhododendron. “Maybe some landscaping. Or an ornamental tree.”