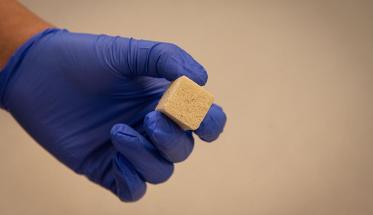 Mitigating climate change is one of the biggest challenges facing the world’s population. Now, a team of researchers at Worcester Polytechnic Institute has developed an entirely new material that’s a low-cost, high-impact sustainable solution to address one of the largest contributors to climate change—concrete.

According to Statisa, between 1995 and 2020 worldwide cement production jumped from 1.39 billion to 4.1 billion tons, making it the second most widely used substance on Earth next to water. Due to how ubiquitous concrete is, and its high carbon dioxide (CO2) emissions, “humanity needs to come up with an alternative to concrete,” says Civil, Environmental & Architectural Engineering Associate Professor Nima Rahbar.

As published in the journal Matter, the research at WPI has led to the creation of a self-healing Enzymatic Construction Material (ECM), which the research team describes as a “living material” that “provides a pathway to repair or even replace [traditional] concrete in the future.”

Biological enzymes are catalysts that drive chemical reactions. The material uses an enzyme, known as carbonic anhydrase, that is found in all living cells. Carbonic anhydrase efficiently reacts with CO2, and “has the unique ability to rapidly remove the greenhouse gas from the atmosphere. This property has allowed us to formulate a carbon-negative material that we hope may ultimately replace concrete,” says Richard Whitcomb Professor of Chemistry and Biochemistry Suzanne Scarlata. 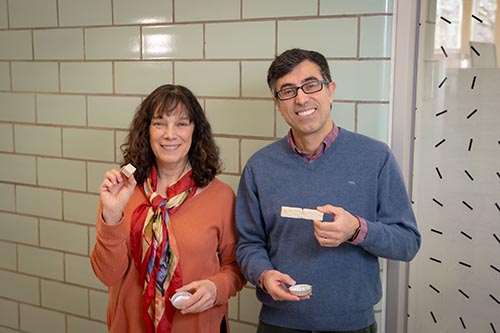 ECM is made through a process involving an enzyme reaction that creates calcium carbonate crystals, which serve as the material’s main ingredient. A sand slurry is also added to the material, as well as a polymer, which holds the material together during its early stages, much like scaffolding does during the construction of a building. The material can also heal itself if cracks develop from wear and tear over time, or from other damage, retaining its strength through as many as six self-healing cycles.

This research builds on an interdisciplinary collaboration between Rahbar, Scarlata and Ph.D. student Shuai Wang. The team previously created a new type of self-healing concrete. The new negative emission construction material takes it a step further, leaving concrete behind to create an entirely new substance that is, in part, made from carbon dioxide: CO2 goes into the material during its production, and the material also consumes CO2 during the self-healing process. In fact, the team devised a calculation that shows “one cubic yard of ECM stores 18 pounds of CO2, while one cubic yard of concrete emits 400 pounds of CO2,” says Rahbar.

Through extensive testing and experimentation, the research team found the material has what they describe as “outstanding” compression strength, rivaling traditional mortar, making it strong enough to be used in the construction of buildings as compressive elements. It also does not require baking at high temperatures like a traditional brick does, and it can be made quickly, unlike the 28 days needed to cure concrete. ECM can also be produced at a low cost as the percentage of the enzymes is minute.

While we may not see ECM at a construction site immediately, it could not be too long before we do. The research team plans to take steps to bring the material out of the lab soon, first by enhancing the properties of ECM by “optimizing the catalytic efficiency of enzymes, the property of scaffolds, and the mechanics of crystal structure,” and then by starting to commercialize the product.

Experts in this story 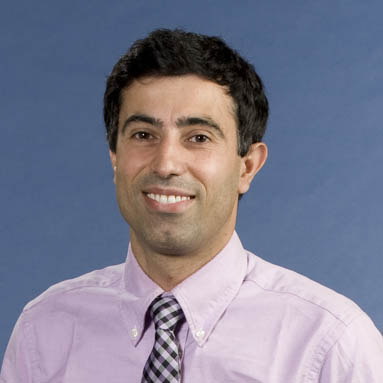 My research and teaching activities in the Department of Civil and Environmental Engineering are in the area of the mechanics of materials and structures. At WPI, my favorite aspect of teaching is working one on one with graduate and undergraduate students on research projects. I like to excite students’ curiosity towards discoveries and creative scientific advancements. In our research group, we focus on the fundamental principles that control the behavior of materials in engineering and biology at multiple scales. 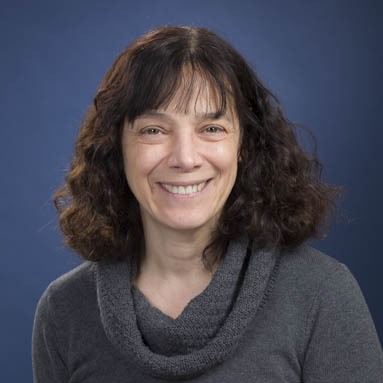 Suzanne Scarlata, Richard Whitcomb Professor of Chemistry and Biochemistry, joined the university faculty in 2016. She studies how small molecules in the bloodstream can change the behavior of cells. In particular, she is interested in how certain hormones and neurotransmitters can activate a family of organic molecules known as G proteins (guanine nucleotide-binding proteins), which are involved in transmitting signals from various stimuli from the exterior to the interior of cells.