Kathi Fisler’s work in computer science, as director of WPI’s Cybersecurity Program and as co-director of Bootstrap — a curriculum program that teaches students algebra through programming video games, among other things — dovetails nicely into a global discussion: What kind of computing skills do today’s students need?

Her recent appointment to the state’s new 40-member Digital Literacy and Computer Science Standards Panel places her firmly into an evolving conversation concerning what standards of computing are needed and how they should be evaluated. 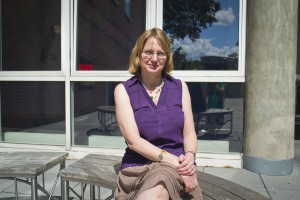 “The panel will be reviewing the state’s existing technology literacy standards, including thinking about how computer science should play into those standards,” she says. “National interest in computing education has grown significantly since 2008 (when last standards were issued). There are many new reports and tools to consider.”

“It has lots to do with the economy, job growth, and seeing technology as a form of literacy,” she says.

Add to that equation a strong band of local tech companies pushing for workforce development, Gov. Deval Patrick speaking on evaluation standards of computing, and corporate leaders from Google, Microsoft, and other national companies urging forward momentum, with the aim of having qualified people to hire.

Fisler describes the Massachusetts Computing Attainment Network — or MassCAN — as an advocacy group collaborating with the state on computing education standards and workforce development. Its mission includes looking at ways computational thinking can be promoted (not just computer literacy) and providing opportunities for K-12 students to receive computing education early and often. MassCAN also seeks to improve hiring prospects and coordinate those from the state, schools, nonprofits, government, and industry to share in this mission.

Only five higher education representatives are on the panel, including Fisler; other panel members are in the public sector, industry, or other areas, she says.

Fisler has been doing computing education outreach for nearly two decades — the last four years or so with Bootstrap, which “teaches algebra through programming,” she says. “We make it part of the math curriculum, putting modules in math classes.” Her added expertise beyond computing outreach got her panel application the stamp of approval, she feels.

The thing that gives Fisler an edge in achieving the panel post, she says, is a diverse background. “I coordinate WPI’s cybersecurity program. K-12 computing standards need to touch on security and privacy. I bring two areas of expertise to the table.”

Though Fisler had to miss the panel’s first meeting in July while she was out of the country, she plans on one meeting per month, lasting about five to six hours each. The next meeting is in Waltham on Aug. 22; the group is likely to discuss results of a survey on existing standards that members filled out at the last meeting.

She says members were told they would be broken off into subcommittees, such as computing and digital literacy, for example, and making standard recommendations.

“We’ll be looking at what other states are doing,” Fisler says, adding that members will be critiquing and being selective in the process. “You can’t put the kitchen sink in these standards, or no one will implement them. It’s all about ‘How we can piece it all together?’”