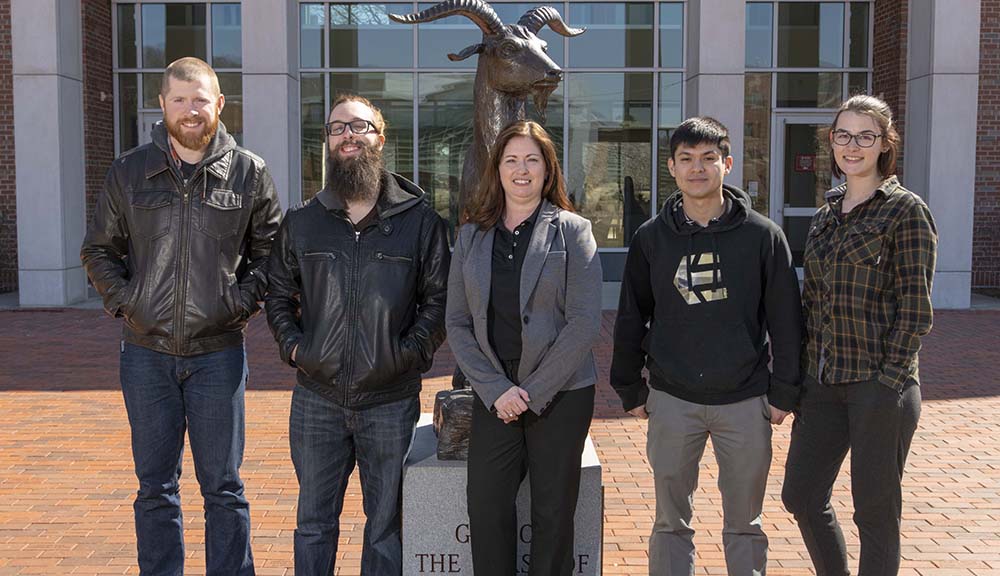 The Path from QCC to WPI

College is an exciting time for everyone, but it can also be nerve-wracking, and for transfer students, the process of switching schools can add a few more concerns to the mix.

Will my credits transfer to my new school?

Will I still be able to graduate on time?

Am I ready for this?

It’s easy to get overwhelmed, but an articulation agreement between WPI and Quinsigamond Community College takes an important step in quelling those fears. Established in 1989, the articulation agreement offers a built-in framework of what courses students interested in transferring to WPI should be taking over the course of two years to prepare themselves for the process.

“It’s reassuring to students, and that’s exactly why we do it,” says director of recruitment partnerships Julie Chapman.

Tracks are available in engineering, biomedical engineering, computer science, chemistry, biochemistry, and environmental and sustainability studies. Additional partnerships are being discussed for interactive media and game development and business. Interested QCC students must be in good academic and disciplinary standing and be earning a GPA of 3.3 or higher to be eligible. At least a dozen out of the 30 to 40 transfers each year come from QCC, and Chapman describes them as consistently some of the most successful students they work with each year.

“This is already a super welcoming, supportive environment," she says, "and we’re putting our best foot forward to make sure transfer students are comfortable jumping into the WPI Plan and the WPI community, and hitting the ground running.”

Organizing and executing such a program isn’t a one-person job, and Chapman is quick to cite her partners across both campuses as essential resources, from Tally Reeverts in the Office of Academic Advising to QCC’s transfer coordinator, Daniel de la Torre.

“Each student has a unique story and has something wonderful to contribute to the WPI community,” Reeverts says.

“Ultimately, it’s coordinated efforts that help ensure that eligible QCC students transition to WPI successfully to continue their educational careers,” de la Torre adds. “That’s a benefit to us all.”

“This is already a super welcoming, supportive environment, and we’re putting our best foot forward to make sure transfer students are comfortable jumping into the WPI Plan and the WPI community, and hitting the ground running.” -Julie Chapman

Several professors at QCC are also WPI alumni and play a valuable role in encouraging students and preparing them for the transfer process. One such professor, Dadbeh Bigonahy ’78, is especially supportive. “The students are on a first-name basis with him. Dadbeh, he’s like Bono,” Chapman explains with a laugh.

“I like to keep them in the WPI family,” Bigonahy jokes before adding that students regularly invite him to Commencement and keep him up-to-date on their progress. “It’s exciting. It makes me think, ‘I did something good.’”

Cara Freedman, Mark Hogan, Vu Nguyen, and Chris Renfro, all members of the Class of 2020, started their academic journeys at QCC, and recently had the chance to share their experiences with other potential students—when Chapman was unable to attend a transfer students information fair, they stepped up.

“It felt great,” Freedman, a mechanical engineering major, said of the chance to answer questions and share her experience with other students. After initially not being accepted to WPI, she'd taken the opportunity to delve deeper into her coursework to find what she was truly passionate about. “When I attended QCC I fell in love with engineering and performed well in school. This guaranteed me a spot at WPI, which I had never previously thought I would have the chance to accept.”

“Ultimately, it’s coordinated efforts that help ensure that eligible QCC students transition to WPI successfully to continue their educational careers. That’s a benefit to us all.” -Daniel de la Torre

“I frequently speak fondly about my transfer experience anyway,” says Renfro, which made it easy for him to answer questions and share stories about his time at both schools. As an aerospace engineering major, he knew his options were WPI and MIT; after some research and conversations with faculty and advisors, he had made his choice. “I knew WPI was where I wanted to go. I didn’t even apply to MIT.”

Nguyen, a biomedical engineering major who planned his education around his enlistment in the National Guard, cites QCC professors and WPI’s biomedical engineering department as his deciding factors. “That,” he says, “and my mother says that when I was younger, WPI was the school I wanted to go to when I grew up.”

Hogan chose to return to school after eight years with a mind to go into robotics. After speaking with professors, though, he realized that he needed more time to prepare academically and financially. In addition to Chapman, Reeverts, and teaching professor Ken Stafford, Hogan credits Bigonahy as a major influence in his education. “Not only was he a great teacher and person, but he absolutely set me up to be able to handle the workload and pace of classes at WPI.”

While their stories vary greatly, it’s easy for Chapman to pinpoint what it is that brings them all together. “They all have grit and determination, and are super goal-oriented,” she says. “They’re very focused—and to me, seeing that play out is so rewarding.”