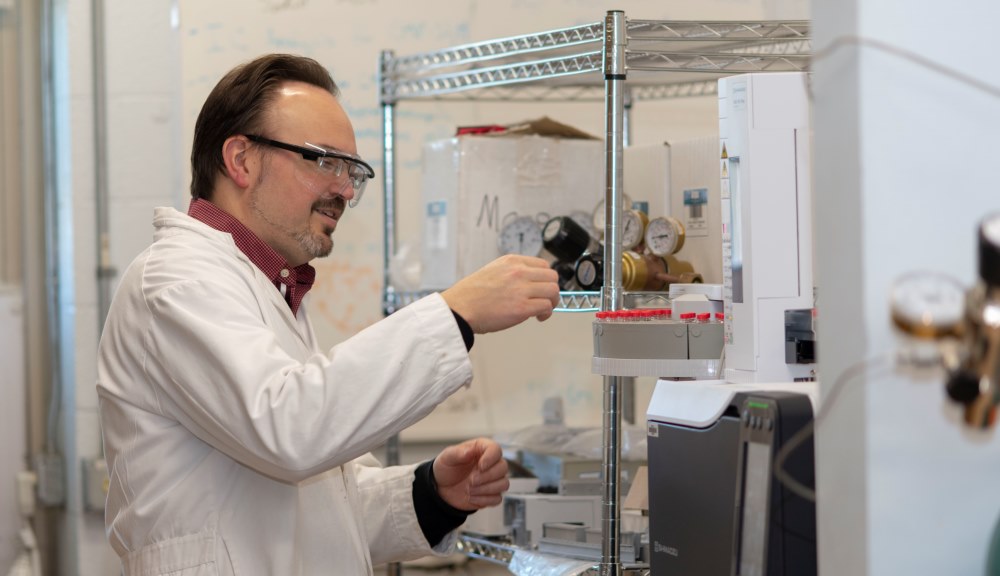 With a Fulbright award, Michael Timko, associate professor of chemical engineering, will learn to build a device that will advance his biofuel research.

Chemical engineer Michael Timko will learn to make a microfluidic device that will help in his research on isobutanol, a potentially green replacement for gasoline

Michael Timko, associate professor of chemical engineering at Worcester Polytechnic Institute (WPI), has received a prestigious Fulbright U.S. Scholar Award that will enable him to spend three months in France learning to develop a device he can use in his research on biofuels, particularly work aimed at making the production of a fuel called isobutanol less costly and more environmentally friendly.

Timko will spend the summer of 2020 at the Univertité de Bordeaux, where he will learn a low-cost technique for fabricating microfluidic devices developed at the university. This work will be conducted in the Institut de Chimie de la Matière Condensée de Bordeaux (ICMCB), a laboratory jointly run by the university and the National Center for Scientific Research.

The new award brings to 20 the number of current WPI faculty members who have received awards through the Fulbright Scholar Program, the U.S. government’s highly competitive flagship program in international educational exchange. Each year the program, which is sponsored by the Bureau of Educational and Cultural Affairs of the U.S. Department of State, sends 800 U.S. faculty members and other professionals abroad to lecture and conduct research in a wide variety of academic and professional fields.

Timko’s interest in microfluidics stems from his goal of being able to observe, in real time, the production of biofuels by microorganisms under extreme conditions of temperature and pressure. Typically, devices designed to contain fluids at high pressures are made of steel, but these devices do not enable scientists to view what is happening inside them. Timko wants to make a microfluidic device at a micron scale (a micron is roughly the width of a human hair) made of silicon and Pyrex, a low-thermal-expansion material used for laboratory glassware. This tiny device could contain fluids at elevated pressures while affording easy viewing using a microscope to, for example, analyze the metabolic response of bacteria to a high-pressure environment.

“We want to scale the process down and study it in this device,” Timko said.

Timko, who received a National Science Foundation CAREER award in 2016 for his work with biofuels, is looking to use the microfluidic device to accelerate his research into finding a more cost-effective way to produce isobutanol, a biofuel that could be used as a gasoline additive or even a gasoline replacement. Higher in energy density than ethanol, isobutanol has proved difficult and expensive to produce.

Timko is part of a multi-university research team that is developing a new way to produce isobutanol, using supercritical carbon dioxide as a solvent and a bacterium that can thrive in that harsh, antimicrobial liquid. Timko’s analysis shows the process could produce isobutanol using one-fifth the energy that traditional, best-case scenario manufacturing processes use, which would make it less expensive and more environmentally friendly.

The microfluidic device will make it possible for Timko to observe the microorganism as it grows in the supercritical carbon dioxide. Through direct observation, he and his team will gain knowledge they can use to further optimize the process. “We’ve built a prototype and it works,” he said. “From a large-scale prospective, though, you want it to not just work but be as efficient as it can be, lowering operating costs and increasingefficiency. This device will let us do that.”

The French researchers, led by Samuel Marre, a professor of chemical engineering at the Université de Bordeaux and a microfluidics researcher, have figured out the design specifications, such as how thick the Pyrex and silicon need to be for building the device Timko needs. In 2012 Timko visited Marre in France and received information about the microfluidics device but he has been unable to create it in his own lab, noting that he has had trouble getting the device to remain sealed at high pressures. “At the pressures we need to study, the devices would fail,” said Timko. “Building the device is a little finicky and subtle. Getting this right will greatly advance our research.”

Timko said that as a chemical engineer he feels a responsibility to work on projects that will benefit the environment. “If I have a skill set that I can use to help solve big problems, then I want to use that unique ability to address those problems,” he said. “And the role of a university is to come up with alternative strategies. That’s what we’re doing here.”