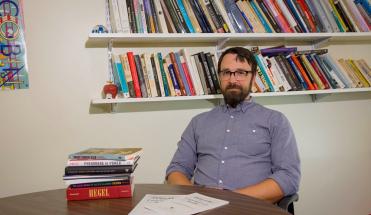 Pfeifer aims to increase readership of the journal, which was founded in 1994

Geoffrey Pfeifer, associate teaching professor of philosophy and global studies, was recently elected co-editor of the journal for The Society for Philosophy in the Contemporary World. The SPCW has been around as a philosophical organization since 1993; Geoff has has been involved with it for six years in various capacities, and is looking forward to his new position with the publication arm of the society.

The journal is peer-reviewed and publishes articles in various and wide-ranging philosophical genres (from philosophy of science to ethics, political philosophy, and aesthetics). Founded in 1994, the disciplinary publication accepts open submissions. It encourages “philosophical thinking and knowledge brought to bear on contemporary society,” says Pfeifer. “Pluralism is their ethos.”

The journal is currently available only in print form, published twice a year. Pfeifer’s goals for the publication include increasing its readership, and giving it an electronic-only presence with printing options available to subscribers.

Pfeifer believes that the humanities is an important part of an overall education, especially important in a university that focuses on engineering and the sciences. His own story includes an introduction to philosophy in high school. That interest only started to blossom later in his life, rediscovering his interest in it when, after taking a few years away from education after high school, he decided to return to college.

With a six-course humanities requirement, WPI gives STEM students more exposure to humanistic knowledge and thinking than most STEM-focused universities, he says. This gives students “a chance to think in ways that science and engineering courses don’t always teach.”