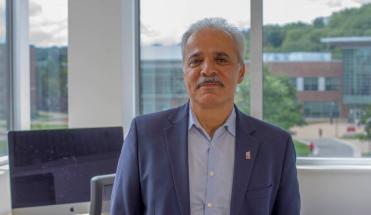 Siamak Najafi, who works daily to ensure that WPI faculty members and students have the computing power they need for their research, has been selected to participate in a region-wide program allowing him to share his expertise with smaller colleges and universities.

Najafi will be the senior project coordinator in the newly created National Science Foundation-sponsored Northeast Cyber Team Program. It is an initiative through which computing professionals at larger and more research-intensive universities, like WPI, will assist faculty members and students at smaller schools in gaining access to the high-performance computing resources essential for today’s academic research.

​Najafi says WPI will take the lead in developing a helpdesk where these students and their professors will be able to go for assistance in accessing advanced computing resources.

“We want to expose these students to the latest technology and tools to prepare them for the workforce of the future, and so they can compete better in the global marketplace,” says Najafi, who as an alumnus with BS (1984) and MS degrees in mechanical engineering came back to WPI in 1995 as an information technology professional, and has served as the university’s director of academic and research computing for more than a decade. He became WPI’s interim Chief Information Officer this month.

“Large-scale computers that can apply thousands of processors to solve a research problem are as important today as test tubes and microscopes were in the 20th Century,” says John Goodhue, executive director of the computing center and principal investigator for the project. “The effective use of computers at small- and medium-sized institutions is essential if their faculty and students are to remain competitive and continue to add value to the region’s economy.”

The plan is to utilize computing professionals at larger universities to help build teams of research computing facilitators—generally graduate students—at small- and medium-size schools. The facilitators will assist students and faculty in accessing resources not available at the smaller schools. The program will also launch 40 computational-intensive research and education projects at more than 30 of the schools, pairing student facilitators with experienced mentors.

“It is not just about the computer resources,” says Ralph Zottola, chief technology officer for research computing at UMass, and, like Najafi, a senior project coordinator for the initiative.

“Access to the researchers and research conducted at the larger universities will open many doors for these students," he says, "and hopefully motivate and enable them to pursue careers in research.”

Najafi says other universities will participate in the initiative’s helpdesk project but WPI will organize it initially.

“Once we put the structure in place, then, hopefully, it will become a self-sustaining program,” he says.

"We want to expose these students to the latest technology and tools to prepare them for the workforce of the future, and so they can compete better in the global marketplace." -Siamak Najafi

Through his work at WPI, Najafi has seen extraordinary growth in the need for ever-faster and more powerful, high-performance computing resources. The trend at WPI has come because of growth in the number of students and research funding. The current need of researchers to process vast amounts of data has also demanded exponential increases in computing power and storage.

“New programs like data science and bioinformatics, which require intensive data mining, require vast amounts of compute power,” Najafi points out. “The demand is ever increasing.”

Graphics processing units (GPUs) now contain thousands of cores that are capable of quickly dealing with huge sets of data. A single GPU can process as much information as a $1 million processing array could 10 years ago, Najafi explains.

“People who use a lot of our GPU power on campus are people doing data mining, neural networks, and advanced neuroimaging analysis,” he says. “We are now swimming in an ocean of data.”

WPI continually adds computing power and is able to handle about 80 percent of the university’s needs on campus, Najafi says. The school uses national computing centers or the regional center in Holyoke, or goes to cloud-based services for particularly intense computing projects or projects with short deadlines.

WPI also has a staff of research computing professionals—led by Najafi—who are scientists familiar with the needs of researchers and skilled at meeting their computing needs.

Smaller universities aren’t as well equipped. And Najafi is looking forward to being part of an effort to help out.

“We will be able to help these smaller universities with faculty and students who can gain access to the proper resources,” he says. “There is an avalanche of information out there and sifting through it takes so much time. They need a quality person on the help desk.”