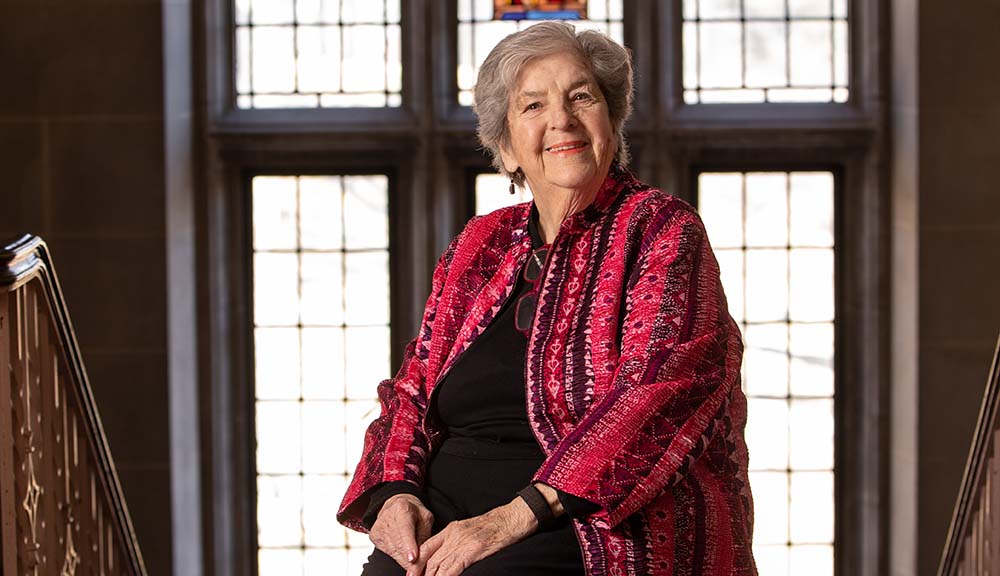 ‘Just Doing My Job’; Professor Helen Vassallo Reflects on Mark She Made at WPI

When you ask Professor Helen Vassallo, who retired in December after 36 years of service to WPI, to discuss the countless accolades and honors she accrued here you’ll be met with stone silence. Then, a few minutes later, she’ll answer with six simple words: “I was just doing my job.”

In a recent phone conversation from her home, Vassallo, former professor of management and the second woman to be named full professor at WPI, kept shifting the attention away from herself to the one topic she will discuss endlessly: her former students.

“I was most proud of being someone the students could come to for advice, consultation, whatever the need was,” she said. “WPI has very bright students. They have a good sense of humor. We all need that in our life.”

Indeed, Vassallo, who has a sense of humor of her own, made a mark during her time at WPI. She served as head of the Management Department from 1989 to 1995, was the longtime chief justice of the Campus Hearing Board, received the Trustees Award for Outstanding Teaching, was recognized as National Sorority Advisor of the Year, belonged to the President’s Council for the Advancement of Women and Minorities, and received the Woman of Consequence Award from the City of Worcester (in 2008). In 2013, she was honored with the Goat’s Head Lifetime Commitment Award from WPI. She was also the first woman to be elected secretary of the faculty, the highest faculty post.

In addition to raising 10 children, three of whom are WPI alumni, Vassallo also authored numerous articles, two books, and one monograph, and is the co-holder of two patents. Along with her impact on the actual university, she also touched many people who crossed her path.

“For me, Helen serves as an inspiration for all of us. She has been a model of achieving things that no one thought were possible. Her list of 'firsts' is long, but that isn’t what I think of when I think of Helen,” said Steven Taylor, professor and interim dean of the Foisie Business School. “I am reminded of Helen offering inspirational poems at gatherings, I am reminded of her as a positive force for good in all areas of WPI. I am reminded of the generations of students who were inspired by her and became better people because of her. I, like countless others, am inspired by Helen.”

“...I am reminded of her as a positive force for good in all areas of WPI. I am reminded of the generations of students who were inspired by her and became better people because of her. I, like countless others, am inspired by Helen.” -Steven Taylor

Vassallo joined the faculties of WPI’s Management and Biology and Biotechnology departments in 1982 after a distinguished career as an educator, researcher, and business leader in the fields of physiology, pharmacology, and anesthesia. She received a BS from Tufts University and an MS in pharmacology from Tufts University Medical School and then taught at Tufts, Brandeis University, Clark University, and WPI before joining Astra Pharmaceutical Products, where she would ultimately become director of scientific and professional information. While at Astra, she completed a PhD in physiology at Clark and an MBA at WPI, and was a visiting fellow and special student at MIT’s Sloan Institute, where she studied organizational behavior.

Vassallo, well known for her energy and creativity as well as her thoughtfulness and compassion, loves to travel, and she looks back at her time twice spent working with students at WPI project centers––San Francisco and Denmark––as among her most cherished university memories because she witnessed students adapt and grow in new places. She remains in touch with many of these former students, including one who sent her five pounds of Italian cookies as a gift when she retired. This summer she’ll attend the wedding of another.

She wouldn’t answer the question as to what she’d miss most about WPI because, she said, she’ll be around continuing as advisor to the WPI chapter of Phi Sigma Sigma sorority. Just last week Vassallo received the Alan Okun Memorial Award for Excellence in Chapter Advising at WPI’s Greek Recognition Awards.

But she did eventually have a response––one that wasn’t unexpected. “The students.”