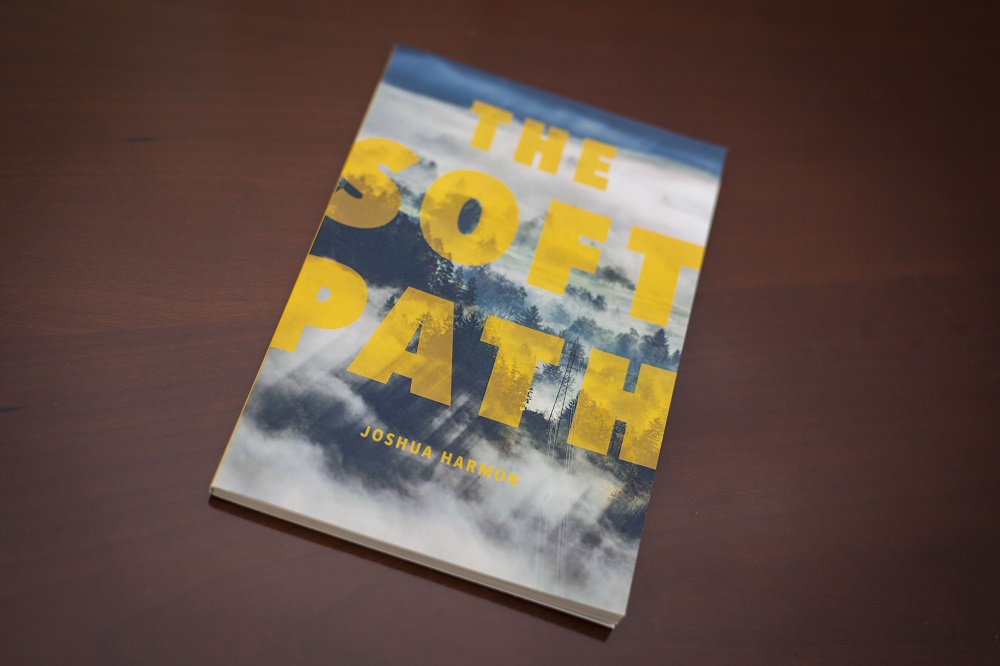 Professor Releases Book of Poetry with The Soft Path

Associate teaching professor of creative writing and American literature, Joshua Harmon not only appreciates different styles of writing, he is a practitioner as well, having published volumes of fiction, essays, and poetry.

Harmon is the author of the poetry collections The Soft Path, Le Spleen de Poughkeepsie, and Scape; the essay collection The Annotated Mixtape; the short fiction collection History of Cold Seasons; and the novel Quinnehtukqut. He has also published two poetry chapbooks, Cascading Failures and The Poughkeepsiad, as well as the nonfiction chapbook Outtakes, B-Sides, & Demos. His fiction, nonfiction, and poetry have appeared widely in periodicals.

He is currently working on a book-length essay on cultural iterations of fantasy circa 1977. At WPI he has taught courses in creative writing and American literature.

The Herd talked with Harmon recently on his new work and what inspires him as a writer.

Unlike some writers, your focus seems to change from each project—both in style (novels, poems, essays) and in subject matter. What pulls you to what you want to do next?

Usually I follow—and trust—my curiosity and interests. Sometimes that leads me to one form, sometimes to another. Each form in which I write (poetry, nonfiction, fiction) allows me to say something different, or to approach an idea in a way I couldn’t otherwise do. Projects tend to announce themselves to me already occupying a specific form. That is, poems appear in my mind as poems, essays as essays, stories as stories, and I don’t really have any desire to write about the same subject matter in more than one form. Of course all of my work shares common elements, but I turn to different forms to write about different things.

Do you prefer one over the other?

No, although most of my recent writing has been poetry and nonfiction.

This is your third book of poetry. How does the approach differ from the others?

Each of the three books involves place. Scape treats place conceptually: how do we transform (or represent, or describe) place via language? How does the frame of one’s own perspective shape how and what we see when we look at the world? Le Spleen de Poughkeepsie came about from a love of Baudelaire’s Le Spleen de Paris and Tableaux Parisiens, and a sort of continual low-level dismay regarding Poughkeepsie, New York, where I then lived. That book is entirely rooted in specific descriptions of a specific place and time. I began writing it just as Lehman Brothers collapsed and the 2008 recession hit. The Soft Path concerns both place (the Massachusetts sites named throughout the book, especially) and placelessness—since interstate highways and parking lots are, in their ubiquity, both everywhere and nowhere. I think all three books also share an unease about the effects of late capitalism on place and people and language.

What style do you use in “The Soft Path?”

In general, I’d say my style here is fairly similar to Le Spleen de Poughkeepsie, if a bit less narrative, and Scape, if a bit more narrative.

Speaking of ‘The Soft Path,’ it appears the subject matter's dark, and coming from a place of perhaps personal distress about the state of the world.

Sure. I started thinking about and drafting the earliest poems in the book while Deepwater Horizon was gushing oil into the Gulf of Mexico. At that time, I’d recently become an “extreme commuter,” and felt guilt at my own expanding carbon footprint after years of being able to walk to work. I’ve been concerned about anthropogenic climate change and declining biodiversity for years--decades before I ever started this book, certainly--though the “global weirding” weather of the last decade has made that concern feel dire.

A study released the week after The Soft Path came out concludes that North American bird populations have decreased by nearly three billion in my lifetime. Cars and trucks have gone from being passive weapons of mass destruction to being used as actual weapons in terror attacks in Toronto, Nice, Jerusalem, Berlin, and New York City. I could go on, of course. What did that old bumper sticker claim? “If you’re not outraged, you’re not paying attention.”

Maybe I titled the book after Amory Lovins’s 1976 term out of some nostalgia for the lost future he made seem so possible then. I grew up in the 1970s, with an engineer father interested in alternative energy sources, and in a family committed to the outdoors and conservation, so I’ve been contemplating these issues for almost my entire life.

What writers influence and inspire you, and why? … in terms of inspiring you to pursue it as part of your career and now in your continuing work.

Far too many to list. In The Soft Path, one influence was the poet and my former professor A. R. Ammons, who typed long poems on rolls of adding machine tape, beginning with his 1965 book, Tape for the Turn of the Year. I'd written some long poems—by my standards—in Le Spleen de Poughkeepsie, but the 45-page poem that ends my new book is a record for me.

Interested in learning more about Joshua Harmon? Check out his recognition by BBC Culture for “ten books to read this December.”