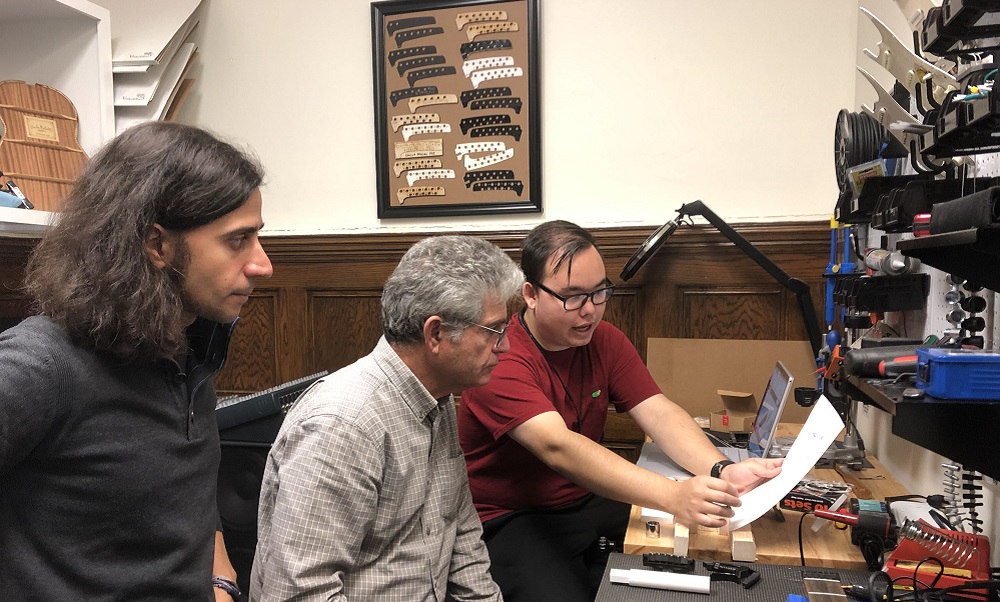 Noting that some of his music students liked to build their own guitars or experiment with vacuum tubes in their amplifiers, associate professor of music technology V.J. Manzo set up an informal lab for students to explore ways to improve the electric guitar.

Work in the lab over the last year has resulted in some interesting concepts, including a revolutionary multi-channel guitar jack that will be featured in a live performance at Higgins House on Dec. 4. The guitar jack was patented through WPI’s Office of Technology Commercialization. 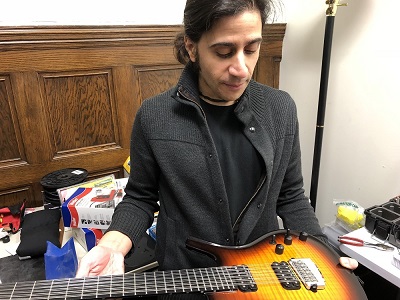 Inspired by his students and building upon some of his past projects, Manzo last year founded the Electric Guitar Innovation Lab (EGIL). His projects focus on new innovations that impact guitar playing on stage and in the studio.

Ryan Tougas met Manzo a little more than a year ago and soon began talking about the research the professor was conducting in the lab. Manzo asked if he would be interested in helping with a project he was considering, and he became part of the lab, meeting other students with a similar passion.

“Since joining, I have been working closely with Dr. Manzo to develop a robotic system that can play guitar in a precise repeatable manner, in an isolated environment,” Tougas says. “The result is that the output from the guitar is solely based upon its unique characteristics, removing the interference of the world it is used in.

“The result is being able to pinpoint certain tonal qualities of any given guitar, through swapping guitars and components, to find where they come from. We have been working to add more control systems into the robot, to be able to handle more variability among guitars.”

Manzo noticed there were many students with similar interests, and while many of his courses address concepts in music programming and developing interactive music systems for composition and performance, he wanted to start some projects that were more narrowly focused on things related to the electric guitar.

The lab focuses on projects that address real-world needs of performers, instrument-makers, and others who work professionally with guitars or guitar technology.

“The real-world needs of a performer might be, for example, adaptations to the instruments or other equipment that they use," says Manzo, "or the creation of new technologies that, in short, help them facilitate their creative goals.”

The EGIL is the only such university lab in the world that Manzo is aware of. “We work on projects related to my own research agenda, and also collaborate with external sponsors to explore areas of research and development that are innovative,” he says.  “The sponsors range from performers and artists looking to develop an adaptation of their instrument as well as established names in the industry, including (guitar innovators) Ken Parker and Ned Steinberger.”

The lab is a continuation of Manzo’s trajectory as a musician and teacher. He studied classical guitar and started composing art music and theatre music while he was an undergraduate music education major. Around this time, he also switched from going to studios to record to figuring out how to do it on his own by using computers.

“The notion of separating the physical actions of performance from the cognitive processes of music-making quickly became one of my primary research interests,” says Manzo. “Once you get software in charge of making the physical performance gestures easier, you can map anything—a switch, a button, a swipe—to control whatever musical variables you like. That concept, I found, is great for beginners, and way more interesting when used with professional performers of traditional instruments; that's when I began composing electro-acoustic music.”

Earning his PhD and teaching music at several universities eventually led to joining the WPI music faculty, where Manzo teaches courses in composition, music programming, and other music technology.

“We work on many different projects throughout the year,” he explains, “and students are invited to get involved in all sorts of capacities. We have a dedicated space on campus with specialized tools that are made specifically for guitars and the types of projects we’re working on. We also work closely with the other lab spaces and resources on campus such as Washburn Shops and the Foisie Innovation Studio.

“Even though the Electric Guitar Innovation Lab is just an extension of my own research here at WPI, I’m surrounded by so many great colleagues on campus from various disciplines who enjoy collaborating on projects; after all, who doesn’t like the electric guitar?”

The Dec. 4 program by will feature guitarist and pickup designer Bob Palmieri, founder of Duneland Labs, who will perform a show of solo electric guitar through a multi-channel/multi-amplifier live setup.

Following the concert, attendees are invited to play several guitars outfitted with these one-of-a-kind multi-channel capabilities (created by Fuse Audio).

Guitarist and pickup designer Bob Palmieri will perform a concert of solo electric guitar music through a multi-channel/multi-amplifier live setup on Dec. 4 at 6 p.m. at Higgins House. This event is free and open to the public. Register for the Multi-Channel Electric Guitar Event here.