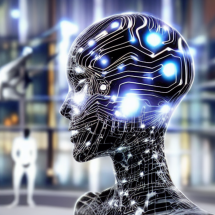 Sophisticated and increasingly intertwined with daily life, artificial intelligence (AI) is a rapidly growing field whose ubiquity brings with it potential ethical pitfalls.

A branch of computer science, AI uses computers to make predictions and decisions to solve problems. Implicit biases of computer scientists, coders, and others who build AI platforms can influence algorithms in the technology, resulting in undetected or unintended discrimination. A new undergraduate program being launched at WPI with an external education partner seeks to explore AI’s human impact.

This B-Term, around 30 students will take part in the inaugural AI4ALL (Artificial Intelligence For All) College Pathways free online learning course. Computer science Professor Rodica Neamtu is overseeing the program’s rollout at WPI, and said the five-week, non-credit-bearing course encourages diversity and inclusion in the field by exploring the social, economic, and emotional impacts of artificial intelligence.

Funded by a grant from Melinda Gates’s Pivotal Ventures, AI4ALL is a nonprofit dedicated to increasing diversity and inclusion in AI education, research, development, and policy. The organization has similar partnerships with eight other universities across the U.S.

It can be uncomfortable to find out that things you create might help people not make the best decisions because of what you hard-coded in there.

Jean King, the Peterson Family Dean of Arts and Sciences, said programs like AI4ALL are a way to diversify STEM by inviting people into new knowledge in a deliberate and thoughtful way.

“This allows them to achieve a sense of comfort and confidence to purse the field as a career or as an input to whatever choice they will make,” King said. “Since AI is the basis of so many things, this knowledge is useful, if not critical, to being prepared for the digital revolution we are all part of. I want to thank Professor Neamtu for her work in this area.”

Coursework and other initiatives at WPI teach students and faculty to identify and address bias to promote equity, and AI4ALL is designed to explore how those biases can cause AI-based technology to overlook certain cultural or socioeconomic sensitivities.

Neamtu said the first goal of the course—taught by an AI4ALL instructor—is to expose more students to AI even if they are not necessarily studying it, because its impact has become so broad in society. Whether someone is applying for a loan or going to the doctor, there’s a chance AI is playing a role.

By opening up the program to all majors and focusing on elevating the voices of women and students of color, Neamtu said she hopes AI4ALL will connect groups with different problem-solving skillsets. Once students sit in on a group like those being built via AI4ALL, they are more likely to remember those different points of view, she said.

The second goal, Neamtu said, is to create a space where a diverse group of students from different racial or socioeconomic backgrounds, or even from different majors, can come together to discuss the thornier implications of AI.

Since AI is the basis of so many things, this knowledge is useful, if not critical, to being prepared for the digital revolution we are all part of.

“It can be uncomfortable to find out that things you create might help people not make the best decisions because of what you hard-coded in there,” she said.

She said, for example, that court judges in some states are using AI to determine recidivism risk in pretrial and pre-sentencing scenarios. It has been found in some cases, however, to result in disproportionately designating Black and Brown people as high risk for skipping bail or re-offending. Neamtu likened it to car insurance that tends to be less expensive in more affluent neighborhoods.

“Do we consider where people live?” Neamtu said. “If you come from a poor area and are in a poor family, you already have two strikes against you. Maybe people should think about something else, other factors to consider. Why don’t we look at crime, rather than income per capita or the size of the houses? Those types of things have snuck into algorithms.”

The AI4ALL course involves project work sponsored by real-world companies, similar to the project-based model at WPI. Senior Ashley Burke, a computer science major and teaching assistant for the program, said the course will be largely conducted online but she will hold office hours and run on-campus lab sessions. Excited to learn along with the group, Burke said ethics and diversity in AI doesn’t often get a platform for deeper discussion in formal coursework at WPI, and she looks forward to hearing a diverse cross-section of voices.

“I think it definitely helps to have more women and people of color looking at AI,” Burke said. “It’s good to promote a space for them to also show that they have the ability to produce exceptional work.”

Neamtu noted that a component of the AI4ALL program is creating an alumni network of students who have participated in the program, with a particular focus on women and people from underrepresented groups.

“Their goal is for companies to find students who have shown an interest in AI and pull them into meaningful internships and jobs, and the students who have been through AI4ALL will bring that new outlook to those companies,” Neamtu said.

The first cohort of AI4ALL starts Oct. 26, but Neamtu said she plans to start outreach to prepare another cohort for C-Term. She said her broader hope is to integrate an AI4ALL-like credit-bearing course into the curriculum. She said faculty in the computer and data science departments have been supportive, and have promoted the program to students.