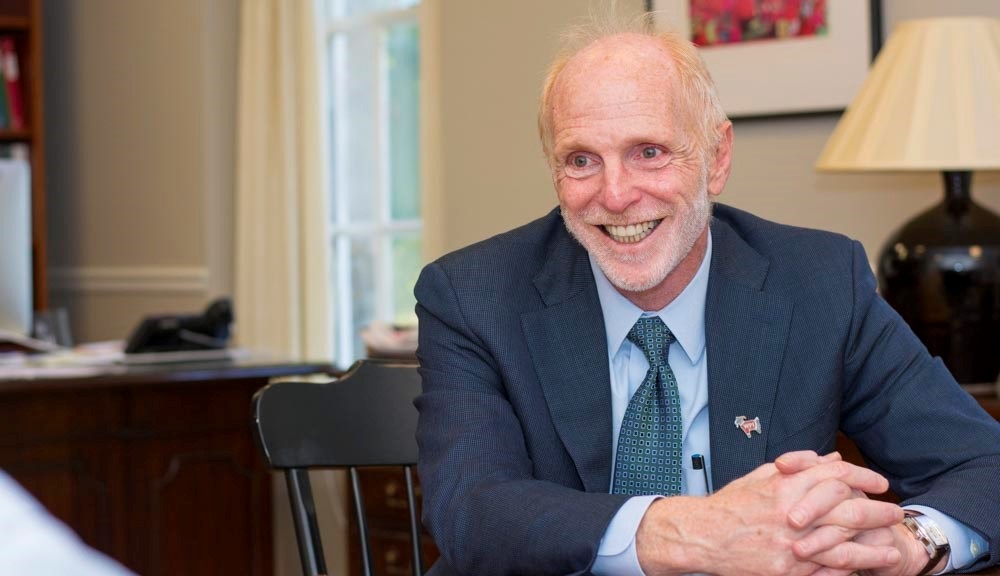 Provost to be Honored by American Chemical Society

Provost Bruce Bursten is not typically a “speechless” kind of guy, but when he was notified that the American Chemical Society (ACS) will hold a symposium in April in his honor, he says he was blown away and didn’t know what to say.

“Part of what feels so good about this is that I love being a chemist and I’m proud of it,” Bursten says. “I still love getting excited in the classroom and getting students who thought they would hate it excited about chemistry, and have them see that it is not as hate-able as they think. The best part of the job is that you get to change people’s lives for the better at an influential time in their lives as students.”

Over the years, Bursten has received numerous national and international honors for his academic accomplishments; he is immediate past chair of the chemistry section of the American Association for the Advancement of Science.

But it is the symposium to honor his contributions in the electronic structure of the heavy elements, where many of his colleagues and past students will speak, he says, that gave him a “pinch-yourself-to-make-sure-you’re-still-alive” moment.

“Part of what feels so good about this is that I love being a chemist and I’m proud of it. I still love getting excited in the classroom and getting students who thought they would hate it excited about chemistry, and have them see that it is not as hate-able as they think." -Bruce Bursten

Over two full days, 40 speakers in areas of ACS will give presentations at “Frontiers in Heavy Element Electronic Structure, a Tribute to Bruce Bursten,” including some of Bursten’s former PhD and postdoctoral students. The joint inorganic/nuclear chemistry division symposium will be held at the 253rd ACS National Meeting in San Francisco April 2–6. The ACS holds two national meetings a year with 10,000 to 15,000 attendees.

“I’m surprised and truly flattered to learn where the speakers are from,” Bursten says. “There are a number of people who have really made a difference and the fact that some are my former students who have gone on and done well for themselves is very gratifying.”

Speakers include his longtime colleague and one of three organizers of the symposium David Clark from the Los Alamos National Lab; Al Sattelberger from the Argonne National Lab, whom Bursten met more than 40 years ago and is his best friend in chemistry; Karen Goldberg, Nicole A. Boand Endowed Chair in Chemistry, University of Washington, and a former postdoc of Bursten’s; Bill Schneider, H. Clifford and Evelyn A. Brosey Professor of Engineering, University of Notre Dame, and a former PhD student of his; textbook co-author Catherine Murphy, Peter C. and Gretchen Miller Markunas Professor of Chemistry, University of Illinois; former colleague Claudia Turro, Dow Professor of Chemistry, Ohio State University; and former research associate Jun Li, ChangJiang professor, Tsinghua University, Beijing, China.

“I have received nice awards through the years, which are wonderful," he adds, "but this feels like such a special tribute on the part of my colleagues who truly value my contributions to research and chemistry that really made a difference.”