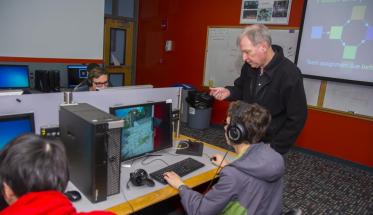 The Next Big Thing: Brian Moriarty Discusses the Future of Interactive Filmmaking in Hollywood

From giving silent films a voice and black-and-white movies a burst of color, to utilizing 3-D technology to create worlds that audiences can reach out and touch, the film industry is constantly exploring new ways to integrate the latest technology into the viewing experience. “The Movie with a Thousand Plotlines,” a recent New Yorker article by Raffi Khatchadourian, delves into the logistics and future of the newest form of storytelling: interactive films.

Interactive filmmaking takes the concept of the classic Choose Your Own Adventure books and turns it up to eleven, creating an experience where films will soon be able to adapt and change their plots based on the viewer’s personality traits, which characters catch their interest, and more. According to Brian Moriarty, a professor of Interactive Media & Game Development who was interviewed by Khatchadourian for the article, movies will soon be “…watching you, and viewing [will be] customized to a degree that is hard to imagine.”

Moriarty took a few minutes to further discuss the impact interactive filmmaking will have—and has already had—on Hollywood and how he expects moviegoers will react to this new technology. 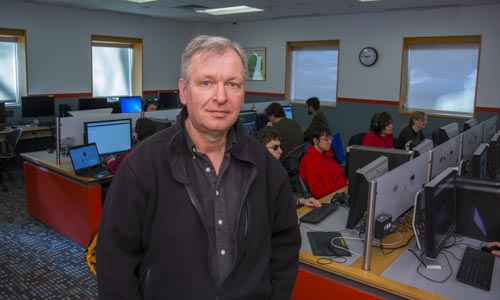 With the Oscars coming up, what impact do you think interactive filmmaking will have on Hollywood?

They don't hand out Oscars for interactive/immersive cinema yet, but the film industry is well aware of its approach. Last month, the prestigious Sundance Film Festival showcased 17 virtual reality productions. A number of notable directors, such as James Cameron, Alejandro González Iñárritu, and Gregory Plotman, are already working with these technologies, either as production tools or as platforms for content delivery.

The end of the article quotes Yoni Bloch as saying, "We have to break out of the gimmicky use of interactivity, and make sure it is used to enhance a story." In your opinion, how could this be done, and how long do you think it'll take for filmmakers to do it?

In the fifty years since the first truly interactive movie (Kinoautomat, 1967), filmmakers and game developers have struggled to overcome the awkwardness of allowing viewers to explicitly decide "what happens next?" in a story—François Truffaut hilariously lampooned the concept in his film adaptation of Ray Bradbury's Fahrenheit 451, released a year earlier. A few games and films have achieved moments of elegance, but the vast majority of choice-based stories feel contrived and clunky.

The problem may lie in the explicit nature of the choices. Currently, viewers must express their preferences by pressing buttons, selecting from menus, pointing at certain objects, or following particular paths. This is a limitation imposed by our delivery platforms. We can read keyboards, mice, touchscreens, and (occasionally) gestures, but we can't read minds.

What if we could? Emerging technology is about to make this eerily possible. WPI's UX lab already offers ways to unobtrusively monitor eye motion, pupil size, head tilt, respiration, pulse rate, and other real-time physiological indicators of a viewer's interest and arousal. Combine this with a demographic profile put together from viewing or buying habits, social media, and machine-learning algorithms, and it becomes feasible to predict, with ever-improving speed and accuracy, how a viewer subconsciously wants a story to unfold, without having to stop and ask them. This implicit form of interactivity may be the key to crafting movies, games, and other yet-uncategorized entertainment forms that are deeply personalized for every viewer, on every viewing.

The creative opportunities are almost unimaginable. So is the potential for abuse.

How do you think moviegoers will react to these kinds of films if they do become the norm? Will they welcome them, or be resistant to the new technology?

People accustomed to linear and explicit-choice narratives will be suspicious at first. Just a few years ago, the presumably hip gaming community sneered at a new breed of quasi-interactive experiences offering little or no explicit choice. They dismissed them as "walking simulators." The term stuck, but it's no longer considered derisive. Lots of people make walking simulators now, including IMGD students. One of these, "The Piper," earned the Provost's MQP Award last year.

Is interactivity in film/media something any WPI students are working on right now?

Every one of our 140+ undergrad and graduate students are building experiences with interactivity as a core component. I'm constantly challenging them to explore the boundaries of what this rapidly-evolving technology can do.