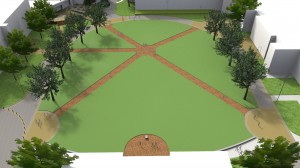 This summer, a blitz of construction and renovations will turn WPI’s Quad upside down, almost literally. But when students return to campus in late August, this fast-track combination project to renovate approximately 120,000 square feet (2.75 square acres) of the Quad and to create a new entrance to the Wedge, including a raised terrace with extra seating, will be wrapping up and hardly change any activity.

The Quad project is an update to the campus master plan that aims to remove parking around the Quad and make it a more pedestrian-friendly zone, says Fred DiMauro, assistant vice president for facilities. The Wedge renovation has been in the wings since the dining hall was revamped, but funding was not available until now. “It made sense to design them together,” he says. 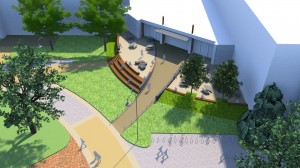 Construction on the approximately $3 million project is already under way to start removing everything down to the dirt (and some of that, as well) to put in a new elevated terrace in front of the Wedge, says Chris Salter, director of projects and engineering. A wheelchair ramp makes the Wedge accessible now, and the ramp features prominently in the new design, flowing out into the Quad rather than as a side approach. The Wedge will now have one double entrance door rather than two side doors.

Seating on both patio and terraced steps will allow students to sit and relax or even  watch a performance on the Quad. “If you can imagine seating in a Greek theater with the exterior walls curved and the stepped seating facing toward the Quad,” Salter says. “There are lots of nooks and crannies.”

The beginning of the project will remove all existing materials including pavers, planters, and landscaping materials. Once the digging for footings is complete, concrete walls will be framed in and then concrete will be poured. “It is a stepped process, no pun intended,” quips Salter. “But the Quad as we know it will all be removed.” There will be stops and starts as commencement and June’s NASA event take place, but the team involved is invigorated by the challenge. 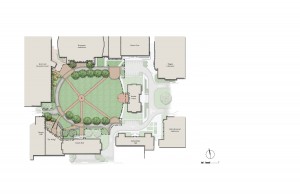 In its place will be a new, expanded grassy area with increased accessible square footage and, more important, a new drainage system. “On the Quad, the subtleties may not look all that different,” says Chuck Kozlowski, vice president at the Boston-based landscape design firm Halvorson Design Partnership and principal-in-charge of the project. But students might start to notice the slight elevation of the center of the Quad, part of the new improved drainage that will involve removing 18 inches of dirt to install drainage pipes and new sand and drainage mix. “Historically, this is a wet site,” says Kozlowski, so for students, this will be a nice change.

The biggest project challenge, says Kozlowski, is the short time frame for completion and that the buildings have to remain in operation. Normally a project of this scope might take twice as long, he says, but a campus environment is restricted. “The challenge is that it encompasses a big portion of the useable campus all at once. And with weather restrictions and the activity on campus during the school year, there’s no good time to do it. But it’s a challenge we can work around.” 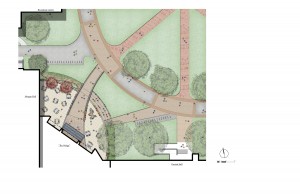 As the project cycles through completion, Salter says there could be a few tweaks here and there. “As budgets and schedules allow, landscape elements might change slightly and a possible canopy over the Wedge’s terrace would give it some architectural pop.”

Students will notice slight differences in the pathways, with a style that uses different materials. The standing Norway maples, a target of Asian Longhorned beetles, will be replaced with large swamp white oaks, whose showy fall colors will mimic WPI’s crimson school colors, says Terry Kinsler, project manager for Halvorson, and whose high canopy won’t make students duck as they walk under the trees. A slight reconfiguration of the trees will lead to one big benefit for students, he says. More Frisbee room. More room to move around unimpeded by landscape elements.