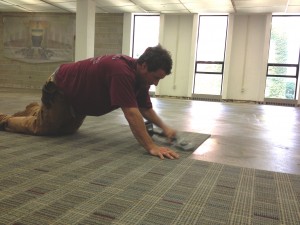 With the completion of athletic fields on top of the new parking garage, the construction of a new dorm on Faraday Street, and the Quad being renovated, WPI has been a bustling place this summer.

And those are just the visible projects. Elsewhere, more than a dozen small projects have been completed or are in the works.

These projects fall under the purview of Chris Salter, director of projects and engineering, who says the number of projects is typical for the summer.

“I would say it’s probably an average year,” he said from his office on Lee Street, across Park Avenue. “The one thing that makes this year feel busier is the Quad work, as it’s very visible.”

Indeed. As Salter spoke, heavy equipment was moving earth and workers in hard hats tackled the myriad tasks required to renovate the entrance to the Wedge, install new drainage, place pathways, and re-landscape.

Away from the Quad other improvements are underway, as the campus gets ready for the 2013-14 academic year.  Salter provided a quick checklist of projects: