Wrestling Highlight Reel in Competition for Best of Brand

• WPI Community Urged to Get Out the Vote! 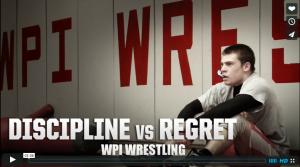 On June 23, voting opens in the “Highlight Reel” category for the National Wrestling Coaches Association (NWCA)’s Best of Brand contest—and WPI’s wrestling program is seeded third in the field of 14 finalists.

The contest, sponsored by the NWCA in collaboration with Elite Level Sports Marketing, recognizes wrestling programs for “their investment in marketing with a goal of continuing to inspire coaches to engage in branding initiatives,” according to the NWCA press release announcing the finalists.

It’s the second time WPI wrestling has been so honored; last year, the WPI highlight reel reached the contest’s final round, ultimately bowing out to Maryland.

Incorporating key moments from the previous season, the video serves first and foremost as a recruiting tool and “for our own guys to look back on the season,” says head wrestling coach Steve Hall ’87.

Geoffrey Riccio of Riccio Productions, a former wrestler at Rhode Island College who as a youth wrestler was coached by Hall, created this year’s reel.

Entitled “Discipline vs. Regret,” the three-minute film emphasizes the concept of bringing everything you have onto the mat while leaving no should haves/could haves behind.

It’s a moving acknowledgement of what it means to put aside individual goals for the good of the team.

“There’s a saying that there are two pains in life, the pain of discipline and the pain of regret, and regret weighs tons while discipline weighs ounces,” Hall observes at the video’s onset, underscoring a theme that has defined the WPI program for at least 25 years.

The NWCA seeding is not only a nod to Hall, the team, and Riccio, but “it’s a great, fun thing for us as the WPI wrestling family and community,” he says.

As the most successful athletic program on campus in WPI history, with the highest winning percentage of any team across 50 years, wrestling is well known around campus as a close-knit, supportive group.

The connections extend well past graduation, and WPI’s “very active wrestling alumni” continue to return to campus year after year.

Certainly, they’ll be ready when it’s time to vote.

During last year’s highlight reel contest, Hall says, “I’m pretty sure we shut down the productivity of the entire Northeast with everyone sitting at their computers voting for this thing.”

The contest is organized as a cross between a tournament and “American Idol,” with finalists coming up against one another in a series of voting rounds organized in brackets.

Round 1 begins on June 23, with WPI slated to go head-to-head against 14th seed Ohio University. Voting is open from noon to 9 pm, and voters are allowed to vote once per hour from all devices.

Subsequent rounds will be held during the same hours on June 24 and 25, with the final round on June 26.

Hall is optimistic about WPI’s chances. “I think this year’s video is even better.”