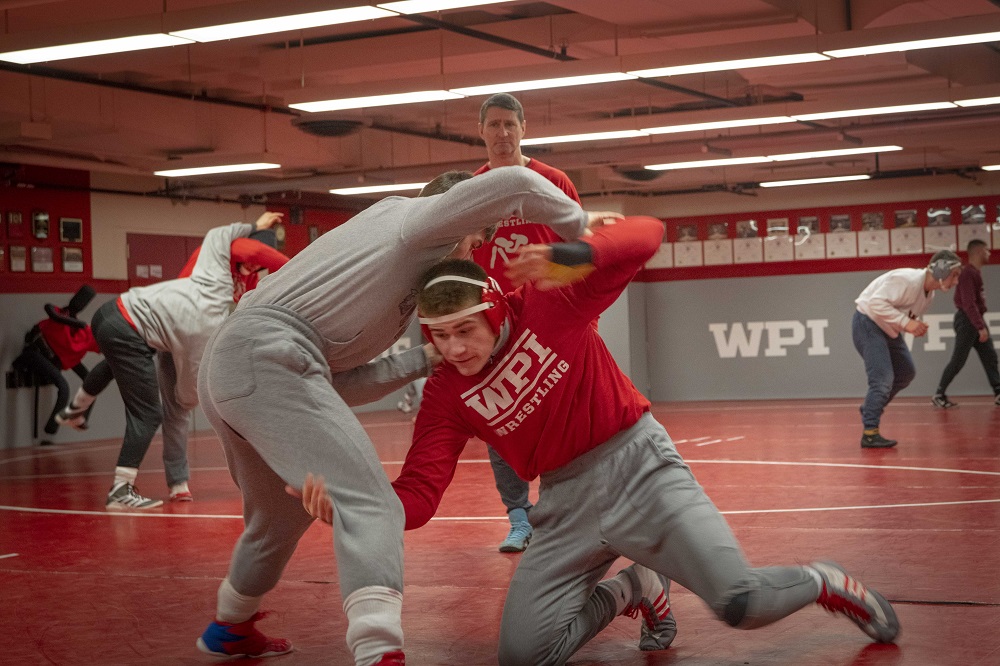 Inspired by U.S. Olympians, the senior excelled on the mat, chronicled the history of WPI Wrestling

When Tyler Marsh stepped onto the mat for his first WPI wrestling match as a freshman he knew almost nothing of the generations of Engineer grapplers who preceded him. But he went on to win both matches that day and matured into one of the university’s best, a four-time Scholar All-American who placed four times in the Northeast Regionals. 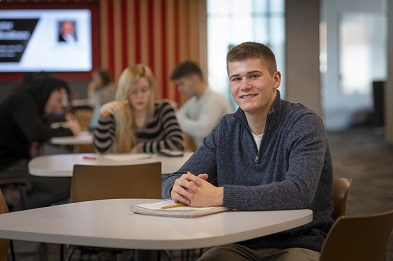 Marsh posted a 29-5 record this season after a third-place performance at the Northeast Regional at 165 pounds. He was undefeated in New England Wrestling Association (NEWA) dual meets this season and was slated to compete in his third consecutive NCAA Championships until the event was cancelled in March as the coronavirus pandemic grew. He was also recently recognized by the National Wrestling Coaches Association (NWCA) as Third Team All-American.

Coach Matt Oney was outspoken in his praise for Marsh’s work ethic and leadership in WPI Wrestling. “Tyler is an outstanding competitor, athlete, and wrestler, and has an incredible work ethic,” he says. “He has finished his career as one of the most accomplished wrestlers in WPI history.”

However, the things he has contributed to WPI Wrestling outside of competition are what makes him truly special, Oney says. “His humble leadership and care for everyone on our team, his willingness to make sacrifices to improve not only himself but those around him—on and off the mat and in the classroom—and the character he has consistently demonstrated throughout his career have set a standard for what it means to be a contributing member of our WPI Wrestling Family. Those contributions will last long after he no longer wears our Crimson and Gray singlets,” Oney continues. “As a coach, I could not have asked for more from a student-athlete.”

And even though the pandemic and resulting termination of NCAA championships robbed him of the chance to realize his lifelong dream of being on the podium in what would have been his last tournament, Marsh has earned himself a place in WPI wrestling history by his extraordinary achievements on the mat and by actually writing a history of the wrestling program as part of a sports inquiry seminar.

Professor Peter Hansen cited the paper, A Tradition Like No Other: WPI Wrestling, written for his History of Sports seminar, as a standout example of a well-done academic and historical chronicle. A high academic achiever, Marsh has a 3.92 cumulative GPA, with a 4.00 GPA for the last four consecutive semesters, while majoring in mechanical engineering.

His interest in wrestling began when he was four years old, growing up in Upper Black Eddy, Pa. He followed his older brother, Justin, wrestling in youth middle and high school programs, and followed him to WPI, starting as a freshman right after Justin’s senior year. He said he was inspired by watching college wrestlers go on to the Olympics, and seeing the U.S. become a power on the world stage.

Before deciding on a college, Tyler visited WPI to see Justin's matches, and got to meet then coach Steve Hall and some of the team. He received some letters from institutions recruiting him for their wrestling programs, but he chose WPI.

“I really liked the environment WPI offered,” he says. “I came to WPI for more than just the wrestling program. I knew I wanted to do engineering. The academics here are very good, and I was excited to be part of a good wrestling program and have an opportunity to set myself up for the rest of my life.”

The combination of seven-week terms and Project-Based Learning has provided a fast pace and skills that helped prepare him for the workplace. “I’ve liked the seven-week terms. It’s fast, it’s hard,” he said. “You’re always getting into something new, so it’s keeping you on your toes. I like that aspect of it.

“Project-based learning here really does make an impact on the way you work within a company or organization. I’ve had two internships, and any assignment I’ve had has been as part of a team. You have your individual tasks, but you’re meeting each week and you’re working toward the same goal.”

Marsh's interest in doing the wrestling paper came when he was trying to decide on a capstone project. Coach Hall provided advice on some inquiry seminars, and mentioned an ongoing project involving the archiving of old photos into a digital library, “That got me thinking. I found out about Professor Hansen’s history of sports inquiry seminar,” he says. “I emailed him in C-Term last year and asked if I could write about the wrestling program.”

Hall provided him with a binder containing a wealth of material: old photos, news clippings, weigh-in sheets, and rosters spanning the first 10 years of program. Hansen was impressed with the way his student constructed the history, while also contributing to that history on the mat.

“I loved that Tyler could see himself as part of the story,” Hansen says. “Too often people think of history as something remote and inaccessible. In interviews with past players and coaches, as well as pages of faded news clippings and photos in wrestling scrapbooks, Tyler found the story of WPI’s outstanding wrestling tradition.

“He has contributed significantly to maintaining this tradition in the gym, and I hope his paper inspires his teammates and those who wear the wrestling singlet afterwards to write the next chapter.”

Despite the disappointment of missing the NCAAs, Marsh understands the severity of the pandemic, and empathizes with other athletes who missed out on a chance to excel in championships, or who even lost their entire spring seasons.

“It was definitely heartbreaking. I’ve been wrestling since I was four, and wanted to be All-America status,” he says. “Getting to medal at the Nationals has been my goal my entire life.

“I guess, I feel a little better that everyone is experiencing it. I feel for all of them. It’s still a horrible situation. I got my entire season in, except for (NCAAs). I have friends who play baseball, and they don’t get to play any games.”

Marsh says he anticipates staying involved in wresting in some manner, possibly as a coach. If he were to get a job in the area, he would consider coming back to campus as an assistant to Coach Oney.

“I think wrestling is a pretty good metaphor for almost anything,” he says. “Working on a team, you’re working with your teammates toward the same goal. Each weight class has its own importance and everyone has their own job, but our goal is winning that meet. There are a lot of parallels between wrestling and real life.”