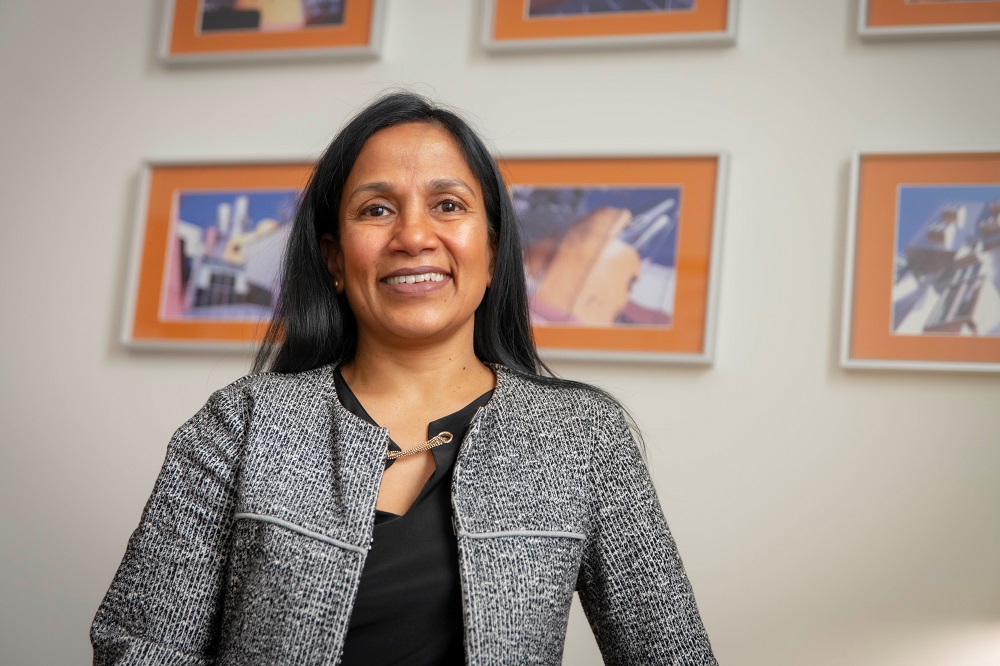 Tiny parasites that live in soil and tinier surface-dwelling fungal pathogens typically found in health care facilities represent different threats to human health, but they appear to share something intriguing—a vulnerability to the same compounds.

That’s why Reeta Rao, professor in the Department of Biology and Biotechnology, is working with researchers from the University of Massachusetts Medical School (UMMS) and the University of Massachusetts Dartmouth, on a one-year project to screen analogs of a plant-derived compound as a potential prophylactic or therapeutic against Candida auris (C. auris) and soil-transmitted parasites such as hookworms, whipworms, and ascarids.

Funded with a $50,000 seed grant from UMMS, the researchers are focusing on Luotonin A, a natural alkaloid extracted from a perennial herb that has been used in traditional Chinese medicine.

“Drugs used to treat parasitic infections can also work against other pathogens,” says Rao, who is co-principal investigator of the project. “The goal of this project is to identify multiple chemical analogs of Luotonin A that work against both fungi and parasites so that we can generate data, publish results, and seek grant funding for further studies. Ultimately, we want to come up with an antifungal, antiparasitic agent.”

The goal of this project is to identify multiple chemical analogs of Luotonin A that work against both fungi and parasites so that we can generate data, publish results, and seek grant funding for further studies.
- Reeta Rao
Professor, Department of Biology and Biotechnology

Infections caused by C. auris and soil-transmitted parasites are dangerous, frequently misdiagnosed, and difficult to treat. C. auris was first identified in 2009, and drug-resistant C. auris now infects an estimated 2 million people annually in the United States, leading to at least 23,000 deaths. The fungus typically spreads in hospitals and other health care facilities, where contact with contaminated equipment or surfaces can lead to blood infections.

“C. auris has spread across the globe and mutated, becoming resistant to established anti-fungal agents,” Rao says. “Infections are hard to treat, and patients in health care facilities are terribly vulnerable. That’s why it’s so important to look for new drugs and find ways to contain this fungus.”

Meanwhile, an estimated 1 billion to 2 billion people worldwide are infected with hookworms, whipworms, or ascarids. The parasites typically spread through contact with soil that has been contaminated with waste from an infected human or animal. Intestinal parasites can stunt growth and cause cognitive impairment, malnutrition and anemia in children, in addition to complicating pregnancies among women.

Luotonin A comes from a genus of plants known as peganum that has produced extracts studied by scientists for medical use, and it has been used in traditional medicine to treat fungal infections and expel intestinal worms.

Rao will receive about $16,666 to cover supplies for her part of the project. Liz Hicks, an undergraduate biomedical engineering student, is assisting with research in Rao’s laboratory.

The internal seed funding will nurture this project and generate knowledge for the public domain and ultimately attract external funding, she says. The award is a recognition of this promising research project, without which it would have been challenging to pursue this line of research, Rao says.

“This seed grant is a joint commitment between UMass and WPI that fosters the collabortive research ecosystem between the two institutions,” Rao says. “We, the investigators, in turn are dedicated to further the fight to prevent and treat infections."