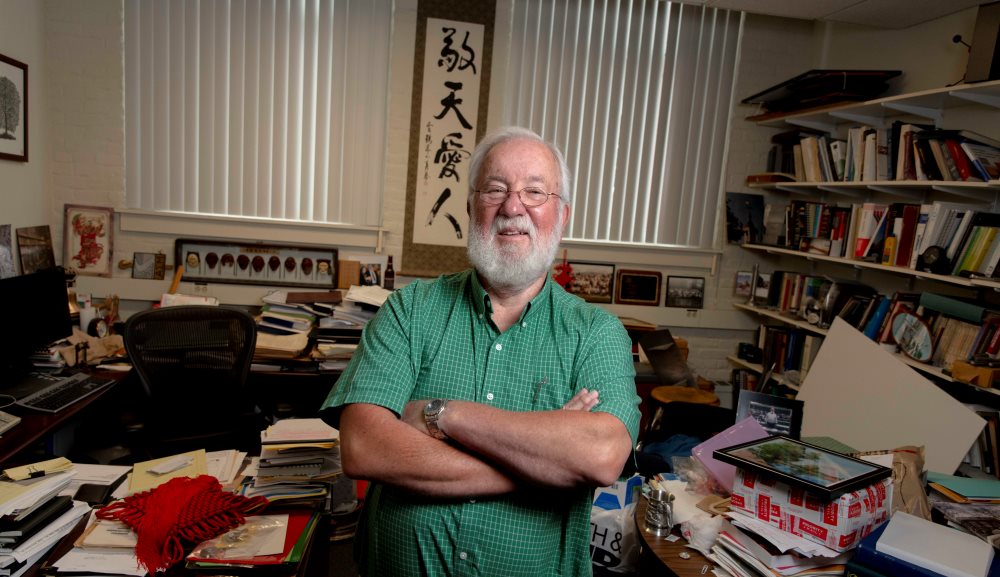 Richard Sisson’s office in the Washburn Shops, home of WPI’s materials science and engineering program, is crowded with photographs and mementos of his professional travels, and awards from his distinguished career in metallurgy.

Richard Sisson Jr., George F. Fuller Professor of Mechanical Engineering and director of the Manufacturing and Materials Science and Engineering programs at Worcester Polytechnic Institute (WPI), has been named a fellow of two materials science professional societies, the International Federation for Heat Treatment and Surface Engineering (IFHTSE), and the American Ceramic Society (ACerS).

Sisson, who directs the Center for Heat Treating Excellence, part of WPI’s Metal Processing Institute, received the IFHTSE fellowship at the 4th International Conference on HTSE in Automotive Applications in Spartanburg, S.C., in June, where he also delivered one of the conference’s three keynote addresses. His presentation was titled “Challenges and Opportunities for the Heat Treating Community: Threats, Risks, and Benefits.”

IFHTSE honors four or fewer fellows each year, recognizing them for making “outstanding, globally recognized, and significant contributions to the development of heat treatment or surface engineering.”

Sisson was honored “for his recognized leadership at the Center for Heat Treating Excellence, and his continued passion for educating the next generation of heat treating engineers and researchers.”

The new ACerS fellows will be honored at the society’s Annual Honor and Awards Banquet on October 15, 2018, in Columbus, Ohio, which will be held in conjunction with the Materials Science & Technology conference. Fellows are recognized for “distinguishing themselves through outstanding contributions to the ceramic arts or sciences, broad and productive scholarship in ceramic science and technology, conspicuous achievement in the ceramic industry, or by outstanding service to the society.”

ACerS, which serves over 11,000 members from more than 70 countries, will honor 15 new fellows this year; they represent an international cross-section of leaders in academia, research labs, industry, and government. “We are very proud of the 2018 Class of ACerS Fellows,” said ACerS president Mike Alexander. “They set the bar for what our members can aspire to.”

Sisson, who joined the WPI faculty in 1976, is internationally recognized for his research in materials science and engineering and manufacturing. His work, which has resulted in more than 250 publications and more than 250 technical presentations, explores the application of the fundamentals of diffusion kinetics, modeling, and thermodynamics to the solution of materials problems, with a current focus on the heat treatment of steels and aluminum alloys as well as additive manufacturing of ceramics and metals. He is the principal investigator for a multi-million-dollar, multi-institution project funded by the U.S. Army aimed at developing new metallurgical methods and new lightweight alloys that will help the military build more effective and durable vehicles and systems.

He has won numerous national and international awards, including being named a fellow of ASM International (formerly the American Society for Metals) and serving as president of the ASM Heat Treating Society. ASM honored him with its Distinguished Life Membership Award in 2013. In 2014 he received the Outstanding Materials Engineer Award as an alumnus of Purdue University for his work in applying fundamental science in transport phenomena, phase transformations, and phase equilibria, as well as for his leadership role as WPI’s dean of graduate studies from 2009 to 2014. He won the Academy of Engineering Excellence Award from Virginia Tech College of Engineering in 2006.

WPI has honored Sisson with the Board of Trustees’ Award for Outstanding Teaching (1987), the Board of Trustees’ Award for Outstanding Research and Creative Scholarship (2017), and the inaugural Chairman’s Exemplary Faculty Prize (2007). He received a BS in metallurgical engineering from Virginia Polytechnic Institute and a PhD in materials science and engineering from Purdue. Before joining the WPI faculty, he taught at Virginia Tech and was a research metallurgist at Savannah River National Laboratory and a staff engineer with Exxon Chemical Company.