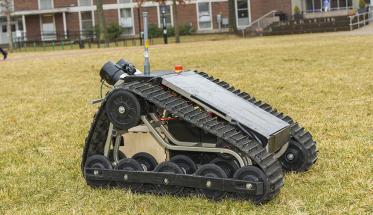 A team of three WPI undergrads took on a challenge for the U.S. Air Force to build an autonomous security robot out of an electronic wheelchair and just $8,000 in supplies. The students created advances—ranging from new algorithms to a high-definition video setup and an updated mechanical design—that the Air Force is likely to adopt for its own robots. 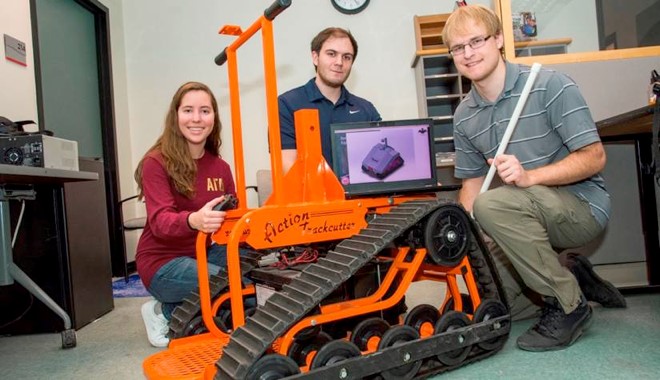 From left, Marissa Bennett, Ken Quartuccio, and Jeff Tolbert with the trackchair they're using as the base for their robot.

“This team is top-notch,” said Richard T. Meyers, program manager and engineering leader with the Engineering & Technical Management Directorate of the Air Force Research Laboratory headquartered at Wright-Patterson Air Force Base in Ohio. “Overall, they did a great job. They came up with one of the best solution sets we’ve seen in this particular challenge.”

The Air Force has been hosting high-tech competitions for student teams for about 10 years, with the first autonomous security robot competition being held in 2017. Three teams entered that competition—each making gains, but also running into problems they couldn’t overcome. No winner was named. The Air Force again ran the same competition in 2018, and WPI was the only team to take on the challenge.

That meant the team’s focus wasn't on competition, but pushing themselves to build a robot that would respond to intrusion alarms on unmanned bases by racing—with or without human assistance—to the area of the suspected intrusion and sending photos and videos back to security personnel. That would enable military security to determine if security personnel needed to be dispatched to the area or if, for example, a tree simply had fallen on a fence.

Having real-time information about what is happening on an unmanned base not only will increase security but will save the military the time and expense involved with needlessly rushing personnel to a non-emergency.

"More than the Usual Team"

The MQP team took on the challenge, using only a tracked all-terrain wheelchair, or trackchair, to serve as the base of the robot and off-the-shelf equipment, like sensors and video cameras.

Their redesigned robot can use machine learning-based vision processing and navigation, while also using a sensor suite, a base charging station, and a communication network. Though different sensors and autonomy components were installed on the robot, the team didn’t have enough time to make it fully autonomous.

They did, however, make advances that impressed the Air Force representative who judged their final project.

“A real strength at WPI is innovation—seeing what can be done by modifying something ... Our team looked at the existing system and figured out how to make it much better ... When a customer like the Air Force recognizes the value your innovation provides, that’s very satisfying.” -Ken Stafford

“I’d say they were more than the usual team,” said Meyers. “One of the biggest things the WPI team brought was the high-definition video capabilities through the camera that our military operators could potentially leverage for security footage.”

He also noted that the Air Force could end up using the team's mechanical redesign. They reverse engineered the trackchair’s chassis, repositioning the engine, which allowed more space for other components and made the engine easier to cool—a critical factor for any robot.

The Air Force rep said he was particularly impressed with Bennett and her coding abilities.

“That student was really impressive,” he noted. “She wrote in four different programming languages—Python, C#, Java, and HTML—and made them all talk to each other. She also used CSS to create a GUI from scratch. This was a good thing for us, as well.”

While the student team will receive a plaque and an official Air Force coin recognizing their work, Bennett said she’s walking away from the project with a lot more than that.

“It was interesting work because I was writing code that no one had really established before,” said Bennett, who had a summer internship with Carbon Black, a Waltham, Mass.–based cybersecurity company. “It definitely was all about thinking outside the box. When we first received the platform, it was different from what we had expected, so we had to change our whole thinking and some design components right away.”

Bennett is now back at WPI working on her master's in computer science, with a primary focus in artificial intelligence and a secondary focus in robotics.

Ken Stafford, teaching professor and director of WPI’s Robotics Resource Center, said that as a 24-year Air Force veteran he was happy the military found the WPI students’ work not only successful, but useful.

“A real strength at WPI is innovation—seeing what can be done by modifying something,” said Stafford, one of the MQP team’s advisors. “This was an innovative project. Our team looked at the existing system and figured out how to make it much better. By flipping the position of the motor, the students freed up a lot of space and made more opportunities for controlling this particular robot. When a customer like the Air Force recognizes the value your innovation provides, that’s very satisfying.”

Stafford is hoping another MQP team will take up the project in the coming school year. Noting that there’s still a lot of potential for research and development with the robot, he said he’d like to see a second team push ahead with more autonomy and create a system that will enable the robot to return to its charging base and reconnect itself once it has finished its reconnaissance.