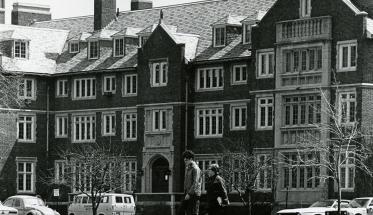 Oldest residence hall to be celebrated on Oct. 30

“Someday, we’re going to have a dormitory.”

That blast from the past is from a 1927 article in the student newspaper, Tech News. Next Monday faculty and staff are invited to the 90th anniversary celebration of Sanford Riley Hall. The oldest residence hall on campus was named for Robert Sanford Riley, Class of 1896. 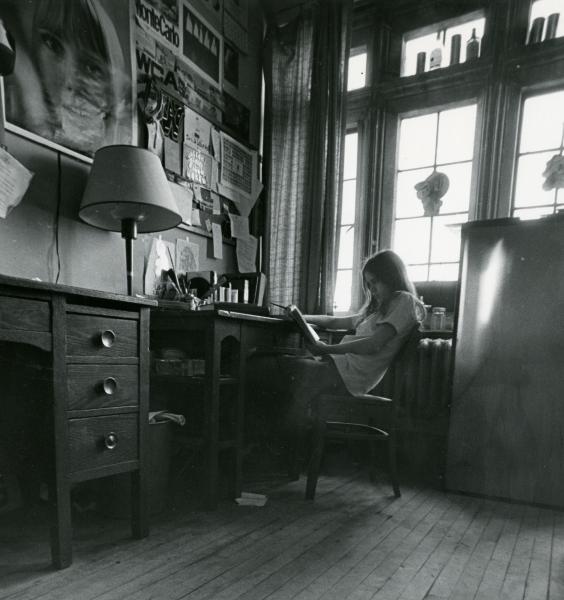 A student studying in Riley Hall.

Riley had been passionate about the construction of a residence hall on campus, but he passed away a month before he was to join the WPI Board of Trustees. In honor of his commitment to the students, the Board named the new residence hall after him and, in 1927, WPI’s first residence hall opened.

In anticipation of the event, Mike Hamilton, assistant director of residential operations, has been curating a series of daily tweets, “Building through Headlines,” in which he posts snippets of newspaper articles chronicling the first rumors of a residence hall being added to campus, all the way through to the building's eventual construction.

“It’s really cool,” says Hamilton, who found much of the content through the Gordon Library Archives and Digital Commons. “You can go back to 1880 and read newspapers and see what campus was like back then.”

Hamilton and the rest of the Residential Services team are planning a birthday party for the ages outside the residence hall on Monday, Oct. 30 from 3 to 6 p.m., featuring music, a photo booth, a tent with Riley memorabilia, free apple cider donuts made fresh on site, and more.

In addition to celebrating the past, WPI students will have the opportunity to usher in the future by having a hand in deciding the furniture that will be used in the new Messenger Residence Hall, Riley’s newest neighbor on the Quad, which is set to open in A-Term 2018.

From 2 to 7 p.m. on the 30th and 10 a.m. to 4 p.m. on the 31st, students can head down to Riley Commons and participate in a virtual reality setup for a sneak peek of what they can expect from the newest residence hall.

According to Hamilton, students who attend the viewing event and fill out an evaluation can receive a free T-shirt, unlimited apple cider donuts, and pop sockets for their phones. But the biggest prize comes later. 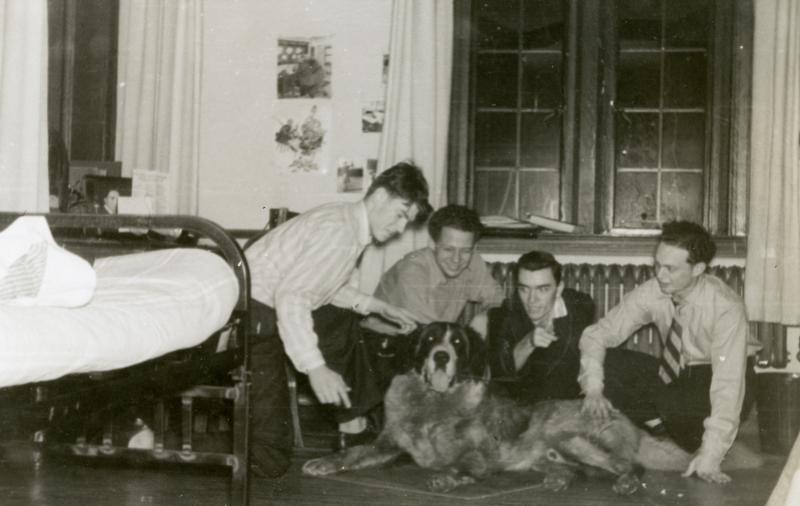 Students relax in Riley with a four-legged friend.

“Any undergrads who attend will be entered to win the chance to choose their room first in Messenger,” he says. He goes on to explain that although students will still have to pay for their rooms, two winners will have the opportunity to view the floor plan of the new residence hall and select their room locations.

“There’ll be some pretty cool views from the fifth floor,” he hints.

When Riley first opened, WPI’s sixth president, Ralph Earle, envisioned building a campus around the residence hall. There was no Quad back in the 1920s, and the only other building nearby was Alumni Gym, a radically different makeup from what the WPI community knows today.

Riley has seen many changes over the course of its time on campus, from housing the Goat’s Head Pub and campus dining hall to becoming home to the Little Theatre in 2005—but one constant through the years is its status as a core part of campus.

“My year in Riley was one of my best at WPI,” says Andrew Teixeira ’09, who worked as an RA and is now an assistant professor in the Department of Chemical Engineering. “The building had that classic New England charm, and was a place where we built a community of lifelong friends right in the heart of campus.”

Hamilton agrees, adding, “Students living in Riley feel a sense of pride. They know it’s the oldest residence hall on campus, and it’s different from the rest. Each room you walk into is constructed a little differently, and residents have that feeling walking through the halls. It’s a unique place.”