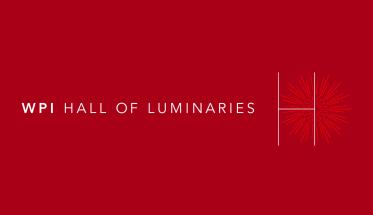 Every superhero needs an origin story, and for many individuals who have brought about extraordinary accomplishments to society, WPI is where they got their start.

The university’s Hall of Luminaries will be revealed to the public on Wednesday, Nov. 1.  Nearly 18 months in the making, it celebrates members of the WPI community who “achieved the pinnacle of their professions or have made exceptional contributions to humanity or to their fields.” 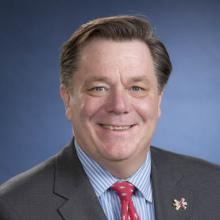 The event first took shape when President Laurie Leshin wanted to create a specific place on campus where alumni could be celebrated and appreciated for their achievements. Bill McAvoy, vice president, University Advancement, brought the project to his division and set things in motion. Shortly afterward, a core team including executive director of lifetime engagement Peter Thomas and executive director for advancement events and communications Judith Jaeger (both in University Advancement) and Myles Walton, past president of the WPI Alumni Association, set to work creating a place on campus that would bring Leshin’s vision to life.

“Our hope is that it will create a space to connect the current community members with giants from WPI’s past,” says Walton. “The Hall will be a tangible, reinforcing, and stimulating agent to show what’s possible.”

One of the most important aspects of the project was determining who would select inductees. Thomas explains that anyone on campus could ask to join the Balloting Committee, which would then vote on the ballot determined by the Selection Committee. Alumni from every generation were recruited, and a committee of 100 members was formed. 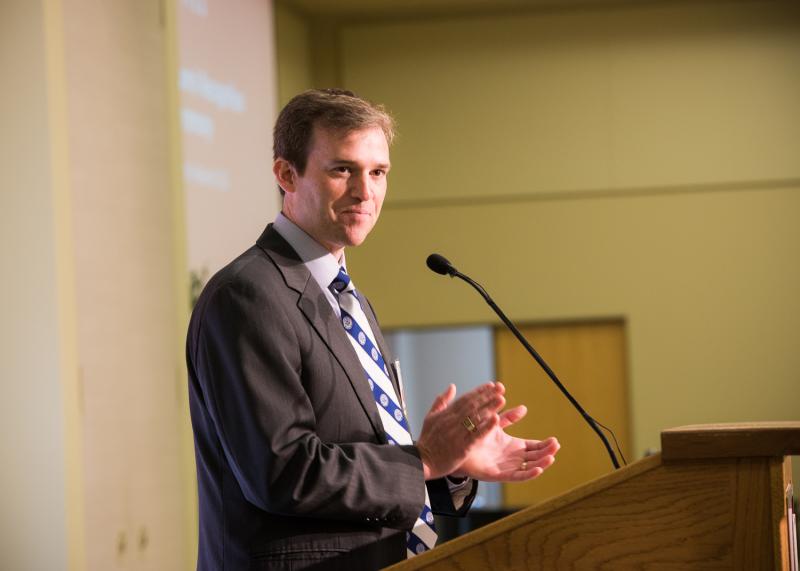 “It was a nice way to get folks engaged,” Thomas says. “The committee covered the whole spectrum of decades—we had many different voices and points of view.”

Members of the WPI community had four months to nominate individuals they believed should be honored, and here are the results:

Inventors, engineers, pioneers—these are only some of the words that describe those being honored at the inaugural Hall of Luminaries ceremony. Check out their biographies to learn more about how they changed WPI—and the world—for the better.

Selecting inductees is only one piece of the puzzle: the team also had to determine a location on campus for the Hall. Eventually, it was decided that it would be housed on the third floor of the Rubin Campus Center, in the lobby area between the Odeum and the Mid-Century Room. 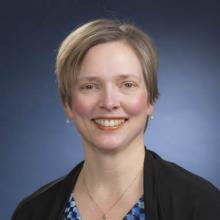 “From the beginning of this project, our intent has been to make the Hall of Luminaries exhibit area a true hall, and not just a hallway,” Jaeger says. She goes on to explain that the team is aware that the lobby space is often used as a study area and event space, and that the exhibit has been designed to blend in seamlessly with the lobby’s current use.

The team received help from many people and departments across campus to make the Hall of Luminaries a reality, including Jim Bedard in Construction Services, Jim McLaughlin and Bill Battelle in the Campus Center Administrative Offices, Greg Snoddy and Philip Clay in Student Affairs, and Maureen Deiana, Peggy Isaacson, Mike Dorsey, and AnnMarie Burtt in Marketing Communications.

“The aim is to capture the spirit of the program and the achievements of our inductees," says Jaeger, "and to give the WPI community a sense of pride when they see the plaques on the Wall of Luminaries—that these amazing people who have done these incredible things are part of our community.” 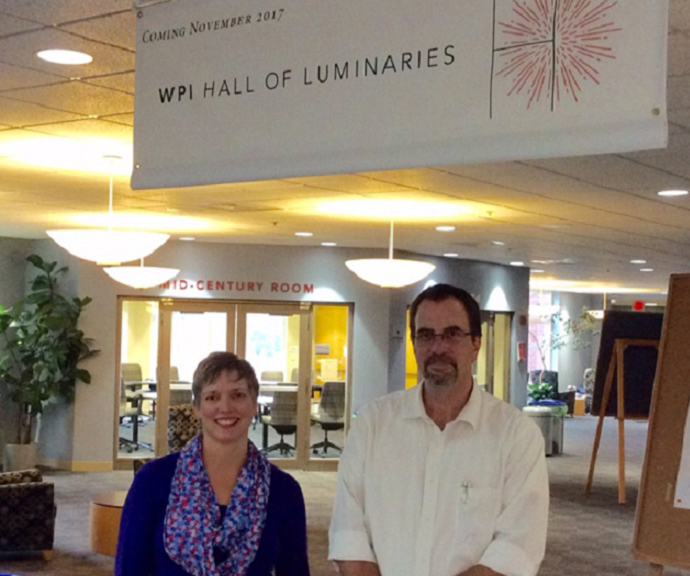 A sneak peek of the new Hall.

Thomas concurs, saying that he pictures the Hall as a perfect spot for prospective students to visit during campus tours, and think about the achievements they could reach in their time at or after WPI. “It’s a pride point,” he says, “—a huge pride point to see all of these amazing constituents in one place.”

“It will be a fantastic way to feature some of the most impactful individuals in the WPI community," adds Walton. "It shows that WPI doesn’t just produce influencers, but also honors them.”

Jaeger is excited for visitors to experience the Hall for themselves. She doesn’t want to give too much away, but she promises one thing: “The ceremony will be full of the gravitas our honorees deserve and, being the inaugural ceremony, we want it to be special.”

The event is open to the public. It will begin at 3 p.m. on Wednesday, Nov. 1, in the Sports & Recreation Center. Following the ceremony, attendees will have the opportunity to visit the newly installed Hall in the Rubin Campus Center.

NOTE: The next class will be inducted in 2019, but nominations may be posted at any time. Submit yours today.