Professor Chernova will use grant to develop high-level robotics tasks

The award seeks to identify and support academic scientists and engineers who show exceptional promise for doing creative research. The program’s objectives are to attract outstanding faculty members to the Navy’s research program, to support their research, and to encourage their teaching and research careers. Out of 280 applicants, 24 winners were chosen this year.

The title of Chernova’s proposal, Multi-Representational Learning from Demonstration through Sequential User Study Development, will allow robots to perform high-level tasks without a user—who may have limited technical knowledge—having to program it.

The ability to customize robot behavior without programming is crucial for getting work done in areas where quick adaptations are needed, such as unstructured environments, like a battlefield. It’s simply not possible to pre-program robots for everything they need to know for all situations, Chernova explains, and remain versatile to changing location or task structure.

Chernova said research being done with an Office of Naval Research grant will support applications that are broad, far reaching, and not limited to military uses. 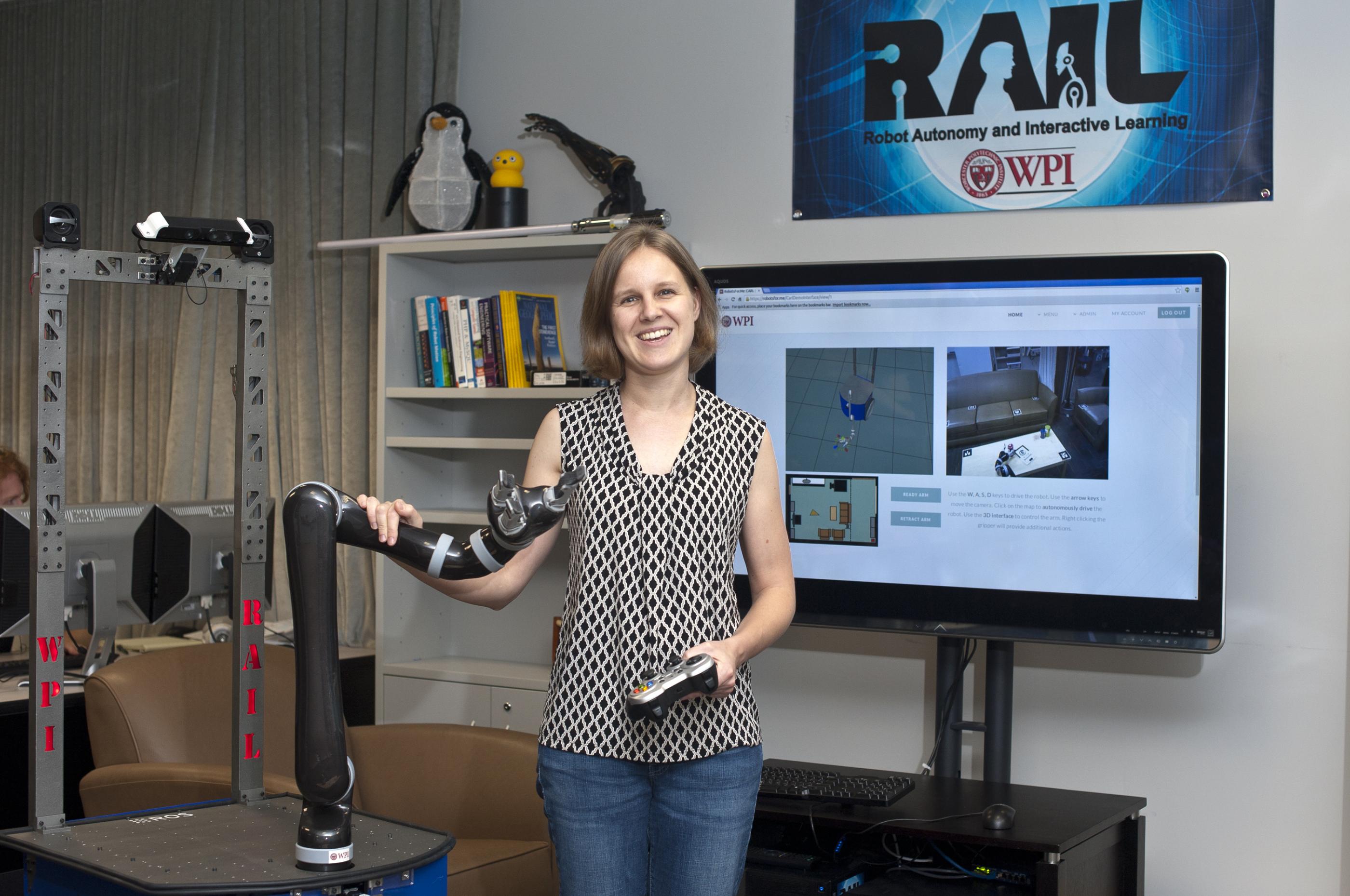 Chernova said research being done with an Office of
Naval Research grant will support applications that are
broad, far reaching, and not limited to military uses.

The concept of autonomous robots is well established in some industrial environments, such as factories, Chernova says. Robots emerged in manufacturing in the 1970s and ’80s, but, “we still haven’t made the leap to having robotics in our homes or in the field,” she notes. “The main challenge is the unpredictability of the real world. We simply cannot pre-program the robot for all the situations it might encounter.”
The study has clear relevance to the Office of Naval Research, Chernova details in her proposal, enabling military personnel without special training to teach autonomous robots new skills while in the field.

But though the grant is funded by the U.S. Navy, Chernova says the project work will support applications that are broad, far reaching, and not limited to military uses. Ultimately, the robots can be used in a household for familiar tasks like cleaning the house or setting a table; performing actions in an office-like environment; or in space, for astronauts’ research on the moon, for example.

CONCEPT IN THE MAKING

In applying for the grant, Chernova says, two tasks were involved: Developing the concept—which can take weeks, months, or years—and writing the proposal.

With the grant money now in the pipeline, the three-year research project can begin. Space has been set aside already in her lab on campus.

“In all work we develop, we test our algorithms with non-technical users,” she says. “That way we make sure that we get something that works well with both programmers and non-programmers alike.”

The funding, she says, allows her team of two to three students to build on their work and take the next steps. More students will be hired to assist in the fall, she says—most likely computer science or robotics majors.

From there, they start at the beginning: using guidance and rewards to teach robots fundamental techniques that can be expanded upon.

“What’s exciting about our experimental setup,” she says, “is that we’re testing in a real household environment, and thus are forced to tackle all the complexities associated with the real world. The usability of the resulting learning methods is of central importance to this project. We are very excited.”