Johnny Cupcakes to speak on entrepreneurship

• Johnny Earle—better known as Johnny Cupcakes, the genius behind the global retail T-shirt brand—will share his secret recipe for entrepreneurial success on Wednesday (Sept. 24) at the Rubin Campus Center Odeum. The talk is free, but seating is limited and you must register at wpi.edu/+johnny. 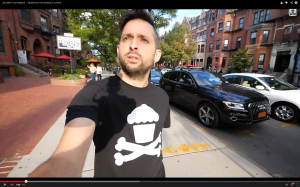 Johnny Earle, shown here in a promotional video,
says college students should take advantage of
access to on-campus facilities to host events
where they can display their products and ideas
to the campus community.

The event will begin at 5:30 p.m. with networking and a pop-up store selling Johnny Cupcakes merchandise, followed by the lecture at 6:30. Earle has promised to stay after his talk for a meet-and-greet with students to answer their questions, says Gina Betti, associate director of the Collaborative for Entrepreneurship and Innovation.

“He’s going to put on a show,” says Betti, calling Earle “the Steve Jobs of retail.” His presentation will include slides, video, and humorous tales of starting—and failing—at 16 businesses before he was 16 years old, and of how he finally found a killer concept and turned it into a global brand.

“Everyone (who attends) is going to learn how to connect their passion with a viable business,” says Earle. “The goal is to motivate and empower students to look at their resources with a fresh set of eyes and start utilizing everything on campus” to help them toward their goal.

For example, college students should take advantage of free or low-cost access to on-campus facilities and equipment to host events where they can display their products and ideas to the campus community. They should also access the talent pool to team with students whose skills complement theirs (marketing students with engineers, for example). And they should attend speaker events like his where they can meet people and network.

“When I was at school, I never had an opportunity like that,” he says. “How powerful it would have been for me to listen to an entrepreneur share his advice.”

Earle has become a fixture on campuses, speaking at hundreds of schools across the U.S. and as far away as London and Japan.

“I never thought I’d speak at schools,” says Earle. “The first time I did it, I was so nervous I brought extra deodorant. And when it was over I said I’d never do it again. But then I received so much great feedback, I said, ‘I gotta keep doing this.’

“I like to do it. It’s a feel-good thing,” Earle adds. “I get to make people laugh, tell them my story, and then see the results when they send me emails or packages from their first business. You never know when one conversation could change a student’s life.”

“When students see what entrepreneurship is and who entrepreneurs are, their confidence levels go up,” says Betti. “They’re more likely to try out their ideas in a safe environment, like college, where they can have learning experiences.”

One of the best learning experiences is failing, according to Earle. 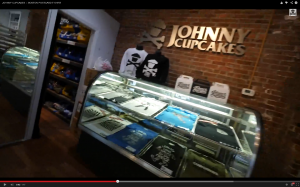 A look at the Johnny Cupcakes Boston store.

“If you’re not failing, you’re not learning,” he says. “Basically, everybody has or has had brilliant ideas. But the thing that stops almost everybody is being afraid of failing. They are haunted by what ifs–what if I fail, what if nobody shows up? So much so that they never end up trying out their idea.

“But once you’re OK with failing, you’re willing to try so many more things. It becomes fun. It ends up being like solving a puzzle. Once you screw up, now you know what not to do,” Earle says. “But first you need to put yourself out there, come out your shell and meet new people on campus, and take a risk—like coming out to an event like this.”

For more information on Earle and his company, visit johnnycupcakes.com.