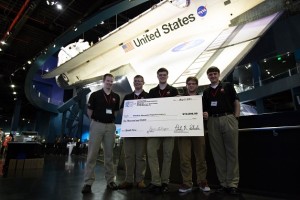 For the second year in a row, a WPI team took top honors at the Intel Cornell Cup competition for their robotics entry. Winning the grand prize was WALRUS, a water and land remote unmanned rover, and another WPI team earned first-place honors for its soft robotic hand entry.

The fourth annual Cup brings together collegiate teams from all over the United States to compete at the Kennedy Space Center in Cape Canaveral, Fla. According to the competition’s website, “The Intel-Cornell Cup is a college-level embedded design competition created to empower student teams to become the inventors of the newest innovative applications of embedded technology. “

“The variety of projects is always amazing,” says Taskin Padir, assistant professor of robotics engineering and electrical and computer engineering, and team advisor. “I always think, ‘How on earth can the judges compare apples and oranges?’—but they look at the higher level. This is to educate and encourage engineering students to think of real-life situations. When they are at real-life jobs, they will have to do this.” 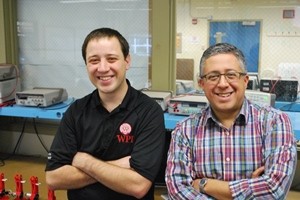 The design competition helps advance the engineering fields, says Padir, and is open ended, but the expectations are very well defined. Although the judges had to pick from great projects, they take the expectations very seriously.

The WPI team considered four or five ideas they had in mind, says Padir, but then decided on their most advanced project. According to the team’s abstract, alleviating the dangers to disaster relief and humanitarian aid workers after natural disasters inspired this project. “With features such as supervised autonomy, high-definition vision systems, and enhanced mobility, the goal of this project is to create an amphibious rover to aid in the search and discovery of persons during disasters,” the team wrote. 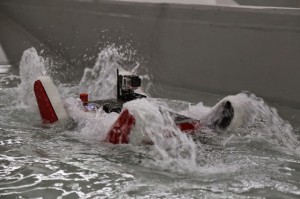 Initial planning for the project began in January 2014 and the design phase began in earnest in August last year, says Padir. “What made this project a success was they set goals and were able to meet these goals very reasonably.”

Of course, it wasn’t easy. Trying to fit the design and planning so they could keep on task and deliver what they promised on time while simultaneously taking classes and job hunting was a challenge for the team members.

The competition itself was exciting for them. “Presenting right next to the ‘rocket garden’ at the Kennedy Space Center is not an opportunity that many get, and we were honored to be a part of the Intel Cornell Cup,” says Dimitrov. “The icing on the cake was the awards dinner held under theAtlantis space shuttle. I will never forget the experience because it was just amazing.”

The team has plans to travel with the robot this summer, starting with Washington, D.C., and Los Angeles in June. Aside from the tremendous pride of taking home top prize, Padir is also encouraged by the efforts of the teams and the projects they developed.

“It’s exciting for me, aside from seeing what your students can accomplish,” says Padir. “They are tackling real-life problems using undergraduate strategies in these competitions. By leveraging these competitions, they can execute a plan with limited time and limited resources and have optimal outcomes. And it’s great to see WPI match up so well on a big stage. It’s showcasing our undergraduate programs on a national level.”