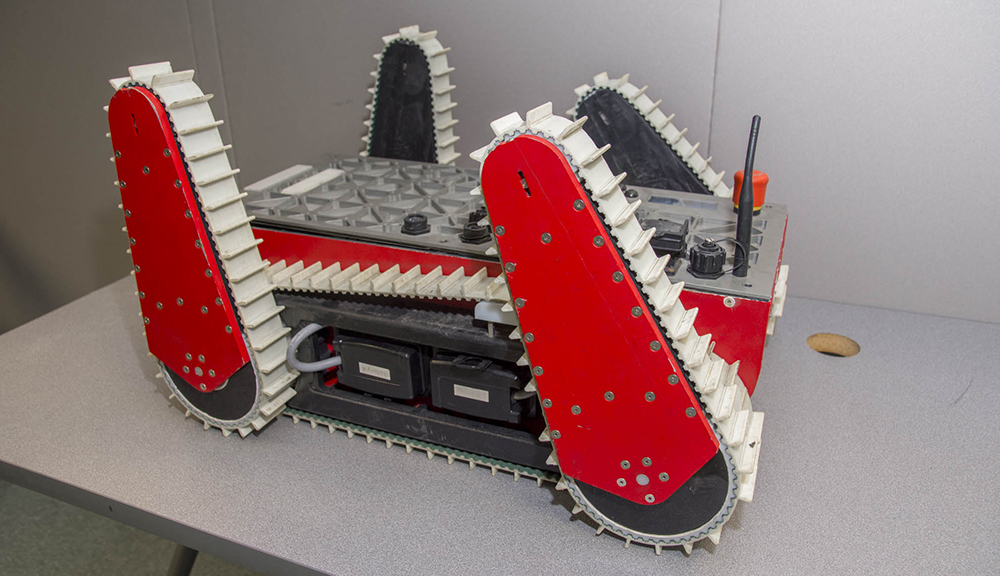 WPI Working on Life-Saving Robots to Aid in Future Disasters

While millions of people across Texas, Louisiana, Florida, and the Caribbean try to begin to recover from back-to-back hurricanes, engineers at WPI are working on robotics that one day could save disaster victims and rescuers.

“If you look at the pictures on the news of hurricane damage, this is almost exactly the scenario our Water and Land Remote Unmanned Search (WALRUS) robot was designed for—a flooded urban area where you need to go into buildings and see if anyone needs help or to make sure the buildings are safe,” says Ken Stafford, teaching professor and director of the university’s Robotics Resource Center. “The scale of the flooding in the Houston area, means you’d want to have a flotilla of these robots.”

WALRUS, developed by a team of WPI students, is an unmanned rover designed to work both on land and in the water. The robot can be set up to have a microphone, speaker, cameras, and screen so rescuers could see and communicate with disaster victims WALRUS finds and send back information on damaged buildings and areas.

The winner of the 2015 Intel Cornell Cup, the WALRUS robot is just one of many projects that WPI has in the works that could one day go into disaster areas to assess damage, locate victims, and even bring people to safety, all while keeping human rescuers safer.

After Hurricane Harvey dumped nearly 50 inches of rain on the region in a long frightening week, the area quickly saw highways under deep white-capped water, submerged cars, and only the roofs of some houses still visible. In Florida, Hurricane Irma made landfall as a Category 5 storm after decimating ehe Caribbean islands in her path and sparking dangerous storm surges along the coasts.

That left many people wading through strong currents to try to find dry shelter, being rescued by neighbors’ boats or waiting on their rooftops for rescue.

And what if these massive storms and floods become more commonplace?

That’s why robotics research, like that being done at WPI, is increasingly critical.

“You need autonomous robots, and many of them, to do much more in these situations,” says Carlo Pinciroli, an assistant professor in Computer Science at WPI, who studies robotic swarm technology. “You want a synergy between humans and robots. Disaster response is a stressful activity so you want robots to do things autonomously and that will reduce stress on the responders.”

Pinciroli envisions a future where dozens or hundreds of robotic, autonomous drones will fly into an area and relay back to responders where victims might be trapped, and the state of buildings and bridges.

Drones, which are remotely controlled instead of autonomous, were used in Hurricane Harvey relief efforts, specifically to transmit images to first responders of areas that are difficult, or particularly dangerous, for humans to get to. However, Pinciroli says aerial robotics today are nothing like what we’ll see in search-and-rescue efforts in another 10 to 15 years.

“The idea will be to deploy swarms of [aerial] robots that work autonomously,” he explains. “With cell towers down, the robots would use their own onboard antennas or wifi. They would act as flying antennas so they can talk to each other and receive messages from cellphones of people who need to be saved.”

Pinciroli, who is creating the software for swarm robotics, is working with Humanitas Solutions, a Montreal-based robotics company, to create these exact drone swarms.

Lot of work still to do

However, while drone technology is being used more today than during search-and-rescue efforts for Hurricane Sandy in 2012, there is still a lot of work to be done to deploy different kinds of robots in significant numbers in disaster scenarios.

David Cyganski, interim director of WPI’s robotics program, says that except for drones, we are not much further ahead with using robotics for search-and-rescue efforts than we were five years ago when Hurricane Sandy devastated parts of New Jersey and New York.

“Sometimes the problem with coming up with an answer to how to deal with a disaster is that there are so many kinds of disasters on so many different scales to deal with,” says Cyganski. “Any development efforts and research funds are so scattered that they don’t really have a larger impact. Small progress is made somewhere but it’s lost in the noise.”

“You need autonomous robots, and many of them, to do much more in these situations. You want a synergy between humans and robots. Disaster response is a stressful activity so you want robots to do things autonomously and that will reduce stress on the responders.” -Carlo Pinciroli

Advances in autonomous drone technology will come the fastest, he adds. Wheeled and tracked robots also are coming along, largely because of their military use, but much-needed amphibious robots are being developed more slowly.

Snake-like robots that could crawl into small spaces in damaged buildings to seek out people in need of rescue are gaining in development, along with autonomous boats or rafts that could be sent into areas to rescue people stranded by floodwaters.

They’re just generally not ready for widespread commercial or government use yet.

And Cyganski said it could be at least 10 years before the Federal Emergency Management Agency, or FEMA, has two or three autonomous humanoid robots that they could send into buildings to check for damage or to rescue survivors.

Learning what is needed

The good news, according to Mike Gennert, professor of robotics and computer science, is that every time there is a disaster, roboticists learn more about what robots need to do to aid in search-and-rescue efforts.

And that spurs them on.

Professors Cagdas Onal and Jie Fu are working on soft, snake-like robots that will be able to crawl into small spaces, and over and around rubble and obstacles to assess building damage and look for disaster survivors.

And WPI professor Raghvendra Cowlagi is studying coordinated autonomous vehicles that would be sent out to move supplies in extreme environments without risking human drivers.

While Cowlagi, an assistant professor of aerospace engineering, has focused on using the technology, which is in the theoretical stage, in response to wildfires, the research could be applied to massive floods, like what is being experienced now in the greater Houston area.

William Michalson, professor of electrical and computer engineering at WPI, is researching autonomous boats, which one day could be used to go out and look for underwater obstacles, like sunken cars, and map out the submerged area. They also could be used to pick up survivors and bring them to dry land.

There generally is much more research being done on wheeled and tracked robots that work on the land, but deadly hurricanes like Harvey and Irma could bring on a greater push for robots that can work on the surface of or under the water.

“Certainly there are some search-and-rescue robots out there that could start working once the waters recede,” says Michalson. “With autonomous boats at this point, you’re not going to easily replace the jet boat pilot heading out and saving people. But we’re not far from using autonomous water vehicles to find underwater obstacles.”

Gennert adds that it’ll likely be between 5 and 15 years before members of an organization like FEMA can roll up to an emergency situation and deploy a team of amphibious robots, wheeled robots, drones, and even humanoid robots to aid in search and rescue.

That, however, is exactly what WPI researchers are working toward.