"The race is not to the swift,” and, in the short term at least, nor is it always to those who finish.

Neither of WPI’s entries completed the Vecna Robot Sprint Challenge in Cambridge earlier this month. Hydro Dog, the four-legged robot powered by artificial muscles, had started walking just days before the competition, so going the 100-meter distance would probably be too much to expect. And WALRUS, the amphibious rover, ran into problems with its wireless networks, making it difficult to control.

But both projects are works in progress, with potential implications that go far beyond any race course.

“It’s really not serious competition,” says Marko Popovic, an assistant research professor in physics and the advisor for Hydro Dog, adding that the event was a good experience for the students and provided good exposure to their projects.

It’s a work in progress, but we’re getting there.
Marko Popovic
advisor for Hydro Dog

“This is the first legged robot built at WPI that is actually functioning, to my knowledge,” Popovic says of Hydro Dog. “This is a big success for WPI robotics.”

Both projects were recently featured in stories done by the Boston Globe and Reuters news service.

Hydro Dog is two feet tall and weighs 35 pounds. Its artificial muscles consist of flexible tubes that fill with and release water to power its legs, which move in tandem, enabling the robot to hop or bound. Hydro Dog is the Major Qualifying Project of Thane Hunt, Andres Leiro, and Daniel Fitzgerald.

Besides being entered in the robot race, which was sponsored by Vecna Technologies, a robotics company, Hydro Dog made a well-received appearance the following week at the Robot Zoo, part of the annual Cambridge Science Festival. A YouTube video shows the vehicle hopping around, to the delight of onlookers. 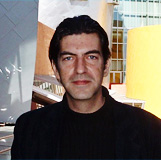 Hydro Dog’s muscles, called Hydro Muscles, were developed by an earlier team under Popovic, and he says the technology can be used in developing prosthetics and braces. “Hydro Muscles are very lifelike. They look like muscles, they behave like muscles,” he says.

The non-exclusive rights to the technology have been sold for the largest sum ever received for intellectual property at WPI, according to Popovic.

WALRUS, which stands for Water and Land Remote Unmanned Search, is an 80-pound robot with independent flippers that enable it to walk, swim and climb. It could be used in law enforcement or in disaster relief, after hurricanes or tsunamis, for example. The robot was developed by Brian Eccles, Brendan McLeod, Timothy Murcko, TJ Watson ,and Mitchell Wills, working with faculty advisers Sonia Chernova, Taskin Padir, and Ken Stafford. 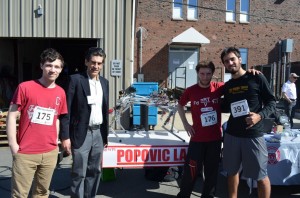 The Vecna robot race and an accompanying 5K for humans were held to raise money for the Vecna Cares Charitable Trust, which brings medical technology to needy communities and to attract young students to science.

The Robot Zoo at the Cambridge Science Festival, in its third year, features robotics technology from around the world and attracts tens of thousands of visitors. Popovic noted with pride that the WPI Popovic Lab booth outdrew MIT and Harvard.

As for Hydro Dog, that pet project will be turned over to another group of students in the next school year.

“It’s a work in progress, but we’re getting there,” Popovic says. “We’ll have something cool to show in a year.”