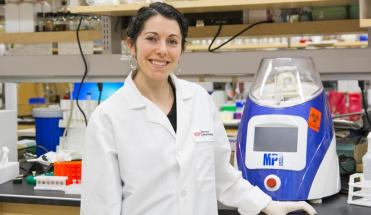 Assistant professor of biology and biotechnology Scarlet Shell says she always thought of herself as the artsy type growing up—immersed in dance classes; parents who were artisans—but when she took her first biology class in college, she says a part of her brain sprang to life … and it felt good.

Shell doesn’t have much leisure time with her career as a WPI professor, as a mother of two boys ages 1 and 4, and running a research lab on campus studying bacteria that cause tuberculosis in the hopes of finding a cure to the disease that still kills 1.8 million worldwide. Tuberculosis, or TB, is a contagious infection that usually attacks the lungs, but can also spread to other parts of the body.

“TB is still a huge killer, even though people in the U.S. think it is a problem that is already solved,” she says. “The problem is, it is difficult to treat with antibiotics. The standard treatment is six months or more with multiple drugs. Compared to other bacterial infections, that is a long and difficult treatment course and logistically challenging, particularly in resource-limited settings.” 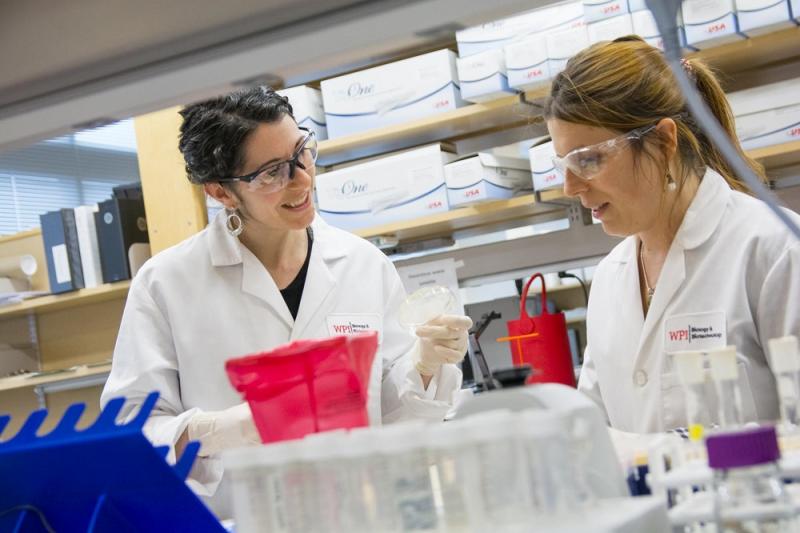 And that is if the person infected has a “standard garden variety” type of TB, she says. If it is the drug-resistant type, infected people typically relapse and require retreatment with a second line of drugs that are not as effective and could take 18 months or longer to work, she points out.

A Love of Dance

But Shell wasn’t always interested in bacteria, or even biology or science. Growing up in rural Vermont, her life revolved around dance, she says. Her parents were both potters, and her father, who was trained as an architect, also ran his own boatbuilding company for 30 years.

“I started dancing when I was 11 and continued pretty much through all of my teenage years,” she says. She studied ballet, but modern dance was her focus.

“I also loved to garden and loved animals, and had a lot of interest in the natural world and how things work. But for some reason I never saw myself as a scientist,” she recalls. “I always thought of myself as an artist.”

Ironically, it was one of her dance teachers who planted the idea that she could make a career in science.

“One dance teacher told me, ‘You can do whatever you want. You’re smart. You could get a PhD in science,’” she says. “I thought at the time that it was the most ridiculous thing I ever heard, and yet, that is what I ended up doing. Funny that a dance teacher implanted that in the back of my brain.”

However, it would still be years before Shell would take her first biology course at Smith College.

She started her college career as a dance major at New York University, where she says she “sort of” had an interest in environmental science and ecology. In NYU’s intensive dance program, there were not many opportunities to explore other subjects, she says.  She also acknowledges that a career in dance would pose a difficult way to make a living. Then, she took a course on invertebrate biology and “was hooked” on biology.

“I transferred to Smith College because there were more opportunities,” she recalls. “Part of my brain was not being used by dance, and that really wanted to be used. When I got into science, part of my brain sprang to life and it was a good feeling.”

During her junior year, she studied abroad in Kenya with the wildlife ecology program.

“Learning about ecology was great, but I started thinking about human diseases, particularly infectious disease that are still a large cause of illness and death in that part of the world,” she explains. “As I proceeded with biology courses at Smith, I studied molecular biology and fell in love with that.”

While studying in Kenya, she saw for the first time many people struggling and suffering with infectious diseases that most people don’t ever deal with in the U.S., and it impacted her, she says.

A Firsthand Look at TB

Then, in grad school in her mid-20s, she spent time in Peru working with a TB research team, going into hospital wards for TB patients and visiting people inflicted with TB in their homes in slums around Lima, where nurses brought them their medications.

“I saw how resource limitations impacted their ability to get treatment,” Shell says.

Seeing those people suffering with TB—some multi-drug resistant, on-and-off treatment for years, who nurses had to convince to keep taking medications with toxic side effects or face possible death—was emotionally challenging.

“Seeing people suffering with this, it takes over people’s lives,” she says. “When you have active TB, you’re too sick to work and support your family. It is a really devastating thing.”

She also saw people living in deep poverty during travel to Guatemala in 2007 after grad school, where she volunteered at a school helping teach English and other subjects.

“I think a lot about people less fortunate than me in resource-limited settings,” Shell says. “It is totally unfair that I was born here by chance and meanwhile, a kid born to a poor family in Guatemala can’t even go to school because he doesn't have a birth certificate. The kids I worked with were even more disadvantaged than the general Guatemalan population.”

“My team is working hard day in and day out to carry out complicated experiments aimed at understanding what is happening at the molecular level inside the cell. If we accomplish everything we’re working on right now, we can provide a foundation for a lot of people to work from to intervene. Once you know the weak points, you can decide what do with the information and design drugs that inhibit particular pathways.” -Scarlet Shell

Traveling through Africa and Latin American, a part of the world she has always been interested in, left her with a feeling of wanting to do something with her life that would help people suffering in other parts of the world, she said. That, combined with her strong belief in basic science, led her to her research at WPI.

She graduated from Smith College in 2001 and received her PhD at the University of California-San Diego in 2008. She then completed six years of postdoctoral training at the Harvard School of Public Health.

Sharing a Love of Biology

With a passion for understanding how living systems work, and a desire to share her love of biology and research with the next generation of scientists, she arrived at WPI in 2014 and opened her research lab. A main area of her research is aimed at understanding the regulatory mechanisms that underlie mycobacterial stress tolerance, combining genetics, genomics, transcriptomics and biochemistry to understand how mycobacteria respond to, and ultimately survive, stressful conditions.

“What I want to understand is the basic biology of these (TB) bacteria,” she says. “If we know how the bacteria respond to stress, then we can try to find ways to intervene and prevent those stress responses from occurring. The bacteria don’t just sit there passively. Some live. Some die. They have ordered responses that they engage to adapt.”

TB and other types of infectious bacteria have found ways to survive stressors, including the human immune system, antibiotics, starvation, lack of oxygen, metal toxicity and low pH levels, she says.

“We are actively bombarding them with toxic chemicals, and the truth is, they deal with them pretty well,” she points out. “We want to understand how they deal with stressors and how they respond, to give us a chance to intervene. We’re specifically working on regulation of gene expression and how they save energy when they are in energy-starved conditions.”

Shell and her research team of grad students, postdoctoral researchers, and undergrads are getting hints on how TB bacteria survive, she says.

“My team is working hard day in and day out to carry out complicated experiments aimed at understanding what is happening at the molecular level inside the cell,” she says. “If we accomplish everything we’re working on right now, we can provide a foundation for a lot of people to work from to intervene. Once you know the weak points, you can decide what do with the information and design drugs that inhibit particular pathways.”

“When you make discoveries, you can’t always see at the time the way they will be useful in the future,” she says. “We have incredible genetic engineering tools available now and all of that was built on the basic understanding of fundamental biology. It is hard to communicate to the general public that fundamental biology is used in so many different ways and it is hard to foresee at the time what [breakthroughs] it can lead to when you are making basic discoveries.”

Learn More About an #ActualLivingScientist

WPI's campus is full of #ActualLivingScientists dedicated to changing and improving the world through their work. Read more about Scarlet Shell's work, and what keeps her pushing forward through challenges and setbacks.