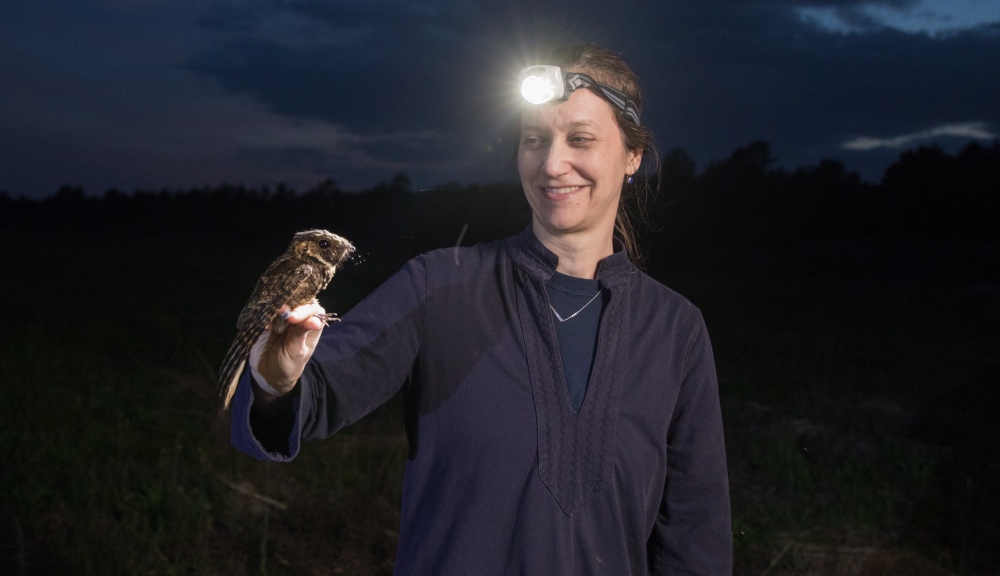 Marja Bakermans with the subject of her current research: the whip-poor-will. This is one of several specimens she and her team captured and tagged during a recent evening in the field.

--From Poor Whip-Poor-Will by Jimmy Kennedy and Nat Simon

Once, the eponymous call of the whip-poor-will rang out across New England in the pre-dawn and twilight hours of spring and summer days. But today, the haunting, quickly whistled song of this mysterious nocturnal bird is heard by few, as the dry open woodlands and clearings it prefers for its breeding grounds have been largely lost to development or have become overgrown.

In Massachusetts, the whip-poor-will has been designated a “species of special concern,” which the state’s Endangered Species Act defines as a plant or animal that has “suffered a decline that could threaten the species if allowed to continue unchecked or that occurs in such small numbers or with such a restricted distribution or specialized habitat requirements that it could easily become threatened within the commonwealth.”

While the whip-poor-will will likely never again be a ubiquitous visitor to neighborhoods throughout the Northeast, the Massachusetts Department of Fisheries and Wildlife is working to maintain the population that calls the state home by protecting and managing the small number of sites that support at least one breeding pair, particularly the six locations that are home to 20 or more pairs. Efforts are also being made to create new whip-poor-will habitats by reintroducing “disturbance regime” in selected locations through controlled fires, logging, and other means.

Complicating efforts to protect and manage the state’s whip-poor-will population is a scarcity of detailed knowledge about the bird’s habits and lifecycle, including factors—like its reproductive success and habitat preferences—that directly affect its long-term prospects.

“There is a lot we don’t know about the whip-poor-will, and that’s why I wanted to get involved in this research,” says Marja Bakermans, associate teaching professor in Undergraduate Studies, who has embarked on a study aimed at casting light on one of the whip-poor-will’s most significant mysteries: its annual migration.

A biologist with a PhD in natural resources from Ohio State University, Bakermans conducts research on wildlife, ecology, environmental science, and conservation biology, with a particular interest in promoting the conservation of biodiversity by maintaining viable wildlife populations across the landscape. Much of her research has focused on the ecology of migratory songbirds, particularly the cerulean warbler and the golden winged warbler, species found in North America that have experienced significant drops in populations due, in large part, to habitat loss.

As with the whip-poor-will, researchers, including Bakermans, have focused on the migratory habits of these warbler species to better understand the factors that are contributing to their decline, she says. “What we are looking at is migratory connectivity—connecting the non-breeding winter habitat to the breeding habitat. As we work to conserve species, we need to know where the threats are. And for our New England species, the threats may lie more on the wintering ground. We just don’t know.”

In fact, she says, very little is known about when and where whip-poor-wills migrate. “Most migratory birds have distinct breeding regions to which they return faithfully, but their wintering grounds can be less distinct. We don’t know if our New England birds go to Florida or Costa Rica, or how spread out they are. A recent paper by Canadian researchers did not find any whip-poor-wills wintering in Florida, but we are curious to see if some or ours might have been visiting Disney!”

In conjunction with the Department of Fisheries and Wildlife, where her husband, Andrew Vitz, is the state ornithologist, and with funding from the William P. Wharton Trust, a Massachusetts foundation that supports the study and conservation of nature, Bakermans and a team of WPI undergraduates have been conducting research in two areas in the state with large breeding populations: Joint Base Cape Cod, a military base at the western end of the Cape with a large tract of undeveloped land, and Bolton Flats Wildlife Management Area in Lancaster.

The team conducted field work in May and June of 2017, and have been back in the field this spring. The research entails a lot of late evenings. “One of the reasons there is so little natural history about these birds is because they are very cryptic,” Bakermans says, “which means they are only active at dawn and dusk, typically.” In addition, the birds are adorned in natural camouflage, making them even more difficult for average birders to spot.

Marja Bakermans conducts research on migratory songbirds like the whip-poor-will, with a particular interest in promoting the conservation of biodiversity by maintaining viable wildlife populations across the landscape. She conducts field studies in Massachusetts aimed at learning more about this mysterious bird, which could help in rebuilding its breeding populations.

Before sunset, Bakermans and her team set up mist nets, which are made of a fine mesh that flying birds can’t see in the dark, and have pockets into which they can drop and become trapped without sustaining injuries. As darkness settles over the landscape, they turn on a recorder and play the call of a male whip-poor-will (only males call, Bakermans says). In time, males appear, ready to challenge the intruders who’ve invaded their territory; some females appear, too, perhaps curious about the new male.

The team records vital stats for the captured birds (sex, weight, length, and so on) and then equips each with a tracking device. In the 2017 work, the device was a light-level geolocator (also called a data logger), a small, lightweight electronic device that fits over a bird’s wings like a tiny backpack. Every five minutes, the locator measures and records the ambient light level. In combination with the time of day, the light measurements can be used to determine the bird’s approximate location (the time of dusk corresponds to latitude, while the midpoint between dawn and dusk can be used to compute longitude).

Over the course of several nights in 2017, they managed to send 25 birds off with the technology needed to track their movements as they made their annual journeys to and from their wintering spots. Bakermans says a team led by a colleague at the University of Ohio tagged another 21 birds. Now they are attempting to recapture as many of those birds as they can, while also fitting them and newly captured birds with more advanced trackers that can record GPS data. The goal is to at least double the number of subjects this year.

“We are making a large effort to recapture any of the tagged birds that survived and have returned to the locations where they were captured,” Bakermans says. “Some of these areas are quite large, so we have to spend a lot of time out there with our nets. It’s a very time- and people-intensive process. We are hoping that at least 50 percent of our tagged birds will return and be captured." 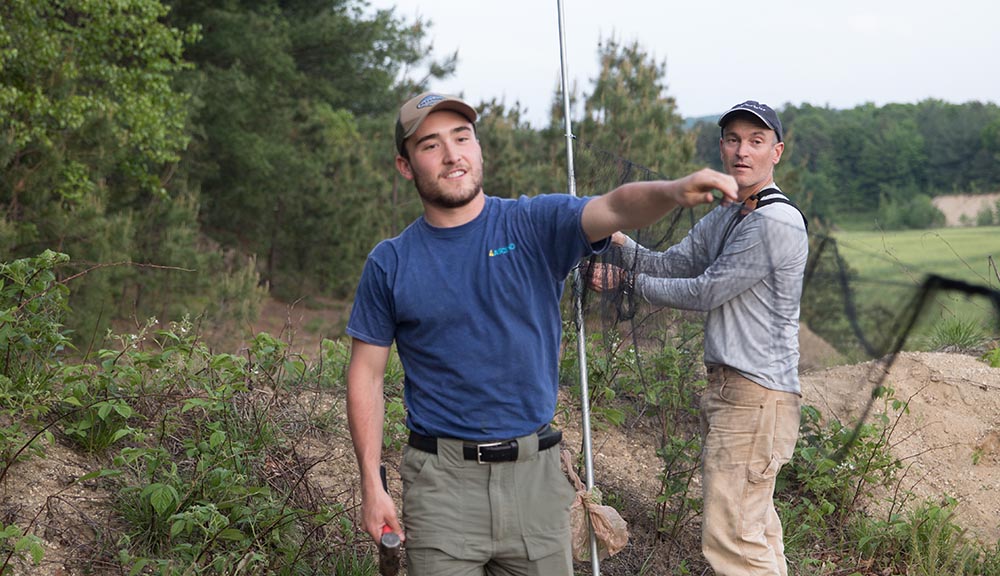 Joshua Driscoll ’20 and Andrew Vitz, state ornithologist, work before dusk to set up a mist net. 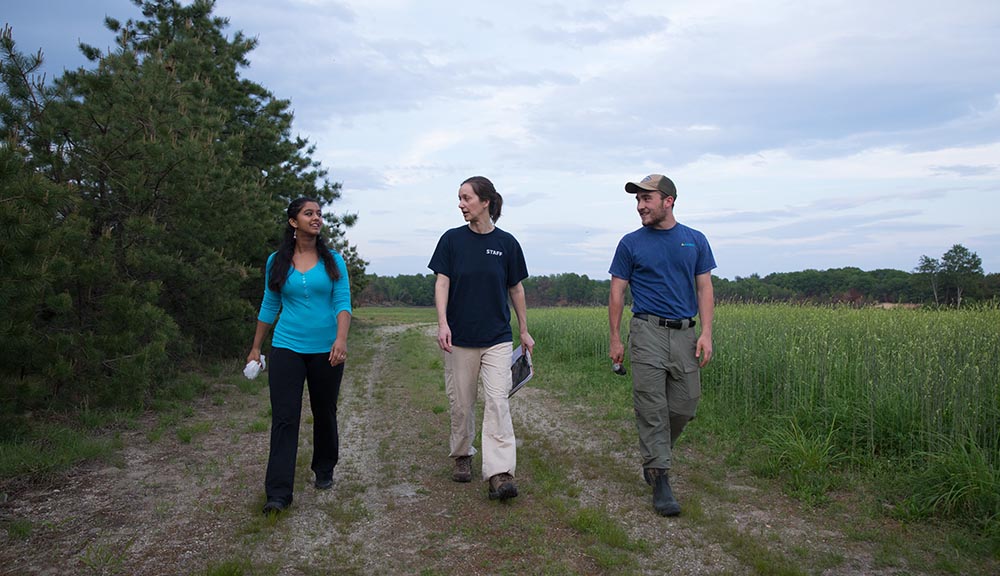 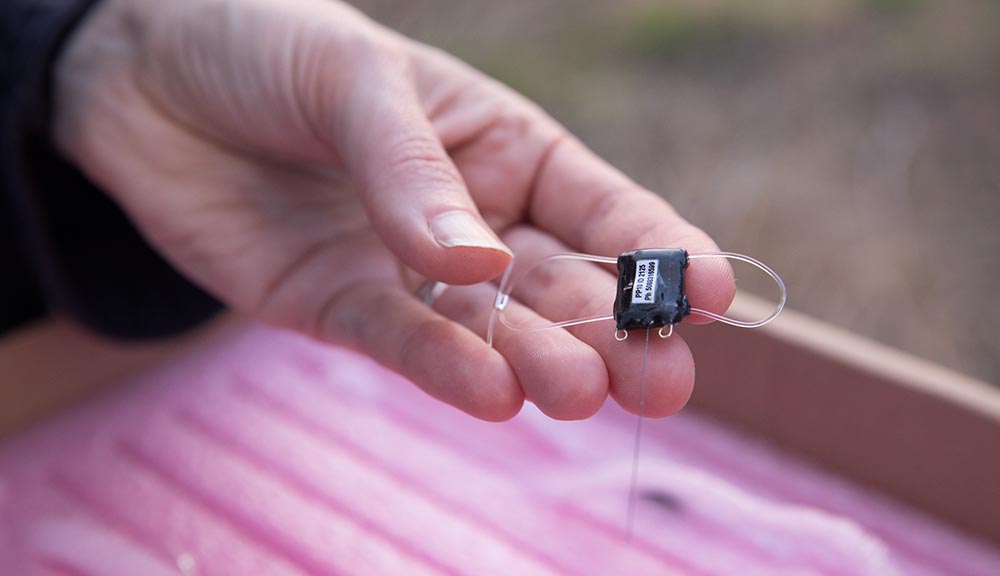 Before being released, many captured birds are equipped with small, lightweight devices that will use GPS tracking technology. 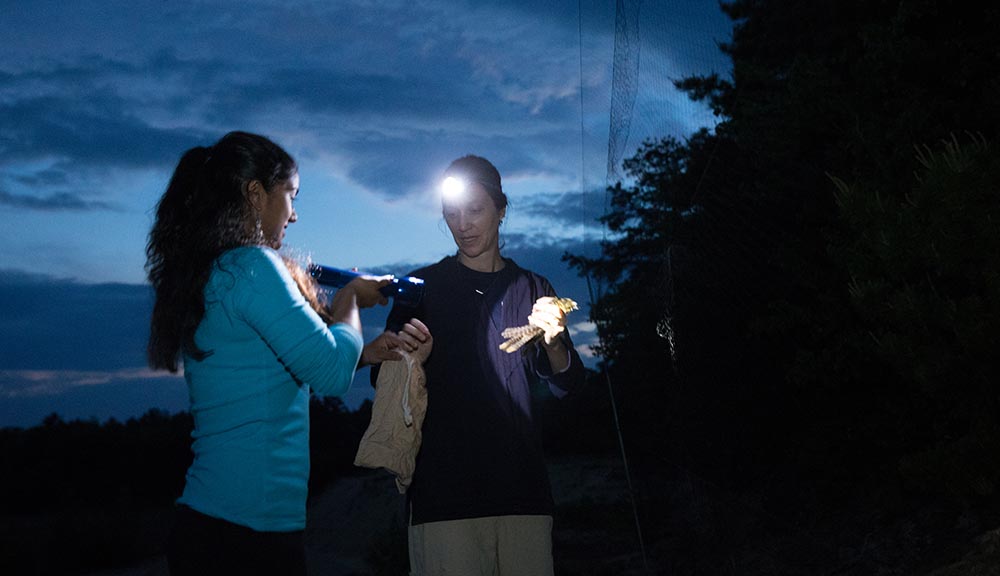 Bakermans retrieves a whip-poor-will from a mist net and prepares to place it in a cloth bag held by Urmila Mallick ‘21. 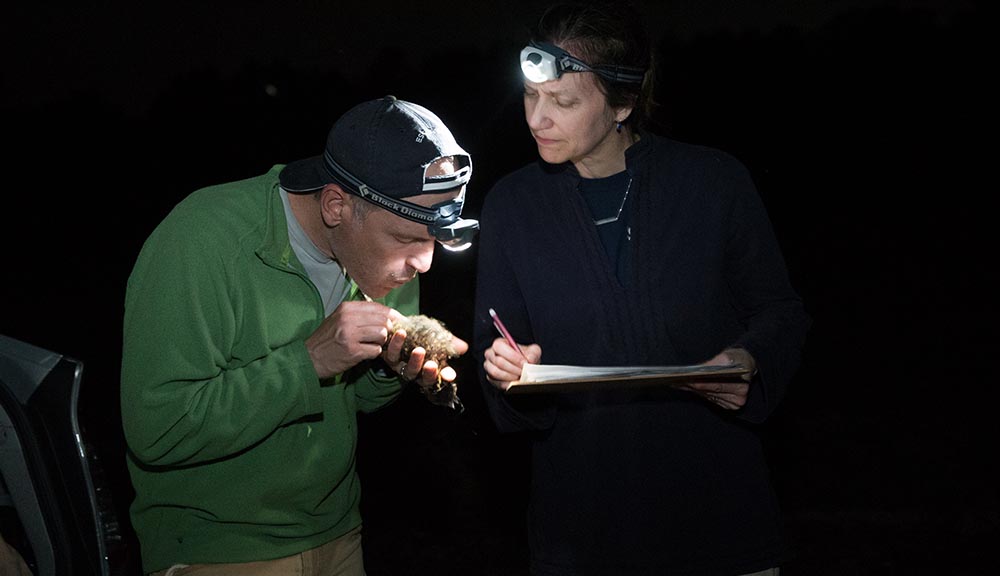 Vitz and Bakermans record key data for each captured bird and check to see if it has previously been banded and tagged.

"Ecology has always interested me and being a field technician for both Bakermans and Vitz was an opportunity I never thought I would have after just my freshman year,” says Joshua Driscoll ’20, a biology major who joined the field research team last year and is back in the field this summer. “I had an amazing time being out in the field in 2017 and am excited to see what this year brings. I definitely see myself pursuing field biology at either a state- or university-appointed position and am thankful for the chance to see what this would be like so early in my career.”

When the data from the recovered trackers is downloaded, Bakermans and her colleagues will look to see if they can pinpoint not only the endpoints of the whip-poor-wills’ southern travels, but the places they stopped to rest along the way. “Once we know where they spend their time, we can visit those locations or work with colleagues to investigate them and see what the habitat is like there and whether there is anything we can do there to promote the survival of this species.

“Those would be locations where we might want to work with conservation partners, forestry partners, and so on to reduce the threats the birds face. It’s all about building a network of partners—government, nonprofit organizations, private landowners—and working to create a safe corridor connecting breeding and wintering locations.”

Protect a Bird; Save an Ecosystem

Here in Massachusetts, Bakermans said her research may bolster efforts by the Department of Fisheries and Wildlife and the Forestry Service to create more habitat that is friendly to the elusive whip-poor-will. They may begin by extending the species’ current breeding locations outward—“building up those population bubbles,” she says. Such work will have benefits that go well beyond protecting one bird species.

“There is a whole suite of birds and other wildlife that depend on the young forest and the shrub-scrub habitats,” she says. “If you work to improve these areas, you will increase the biodiversity across the landscape, which is a very important way of building healthy ecosystems.”

Bakermans said she decided to study the whip-poor-will after coming to Massachusetts and realizing that it would be difficult to continue her work on the cerulean warbler, which she had tracked from its nests high above the forest floor in southern Ohio to its wintering grounds high in the Andes of Venezuela. “That was an interesting multi-state, multi-agency, multi-university project, but, unfortunately, there are very few cerulean warblers in this state.

“So I consulted with Andrew and asked him to name the top species in this state for which he’d like to have this kind of information. We made a list, looked at the pros and cons of studying each species, and the whip-poor-will rose to the top.”

Bringing Back a Sound of Summer

Now that she has the enigmatic night dweller in her sights, Bakermans is thinking about what aspect of the whip-poor-will she would like to explore next. “A very important aspect of a bird’s survival is its reproductive and nesting success,” she says.

“There are a number of ways you can measure this, including the quality of the nesting sites, the conditions around the nests, and, of course, whether or not the chicks survive. Andrew’s specialty is post-breeding success, so we could really cast light on this little-understood aspect of whip-poor-will behavior.”

Casting light is an appropriate metaphor for studying a species that has evolved to spend its waking hours primarily in the gloaming and the dark of night. Thanks to the research of Bakermans and her colleagues, the once-familiar call of the whip-poor-will may become a sound that more and more New Englanders will come to associate with the darkness of a summer evening.