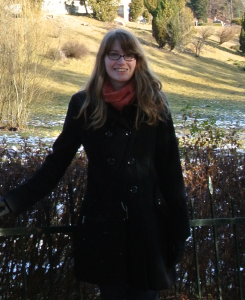 Senior Allison Simpson’s mind was on other things on April 25, the day she found out via email that she’d won the Provost’s MQP Award for Professional Writing. The project, “Candidiasis Risk Factors and Co-Morbidities,” which included a 51-page paper and poster presentation, had taken up so much of her focus that day — and the days preceding — that she’d forgotten the Professional Writing faculty was afoot, selecting a winner.

Last year, during senior presentations, Simpson was at the WPI project center in Australia.

“I had forgotten there was a contest for MQP,” she says. “I hadn’t gone to a senior project presentation before. It was not even on my radar that day. I was more concerned about what to put on my poster.”

When she received the email that told her she’d been chosen, the accolade was especially sweet, says Simpson, as she was exhausted following her presentation. “I went home and crashed,” she said, before checking her computer and learning that all her hard work had certainly paid off.

“I was really excited,” she says.

An Oklahoma native, Simpson is a double major, in biology and biotechnology and professional writing. She’s been a resident of Worcester for the past 15 years or so. Her co-advisers for her MQP were Professor Brenton Faber and Associate Professor Reeta Prusty Rao.

Writing about Candida, a common cause of fungal infections, was encouraged by Faber, Simpson says.Candida is found in the human body and is usually not evident, but can cause harm, especially in those with endocrine disorders, for example, she says. Her project focused on risk factors for infection. Faber made double-blind medical records from an Upstate New York hospital available for study, which helped her presentation, she says.

“By combining the technical and the social Allison’s work offers a rich and multifaceted study of disease,” said Faber.

Her findings? Simpson summarized how Candidadiagnoses have risen by 70 percent over the last 10 years — affecting 1.06 percent of the Canton-Potsdam Hospital population last year. Fungal infections in general are on the rise, she found, more so than bacterial infections. Her findings, she says, can help doctors identify patients who may be at risk. Simpson says she had to be careful of the phraseology she used, as writing about science is a precise skill.

“You have to say in science that something ‘may be the case,’ she says. “You have to go by data.”

Additionally, she says, just spilling out numbers and percentages doesn’t work. “You have to put it in a format physicians can learn from,” she explains. Simpson also created a one-page fact sheet with actual data, instead of presenting only paragraphs and paragraphs of text, to make the document more user-friendly and less cumbersome to decipher.

Simpson is headed to New Orleans in the fall, to begin studies in immunology and microbiology at Tulane University. She’s interested in Lyme disease research, she says, a main disease studied at Tulane, which also has a primate center and is researching things such as dermal Lyme disease vaccine.

“I hope WPI does a Lyme disease study next year,” she says.