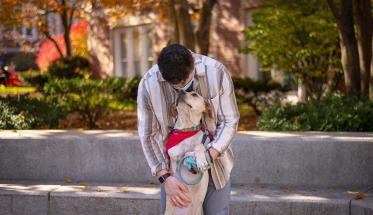 A biomedical engineering graduate student is putting what he's learning in class to good use: building a prosthetic leg for his adopted dog, Cleo

Once breaks are over and students head back to campus, there are lots of ways they get ready for a new term: finishing up that Netflix series, staking out their favorite study spot, adopting a dog … 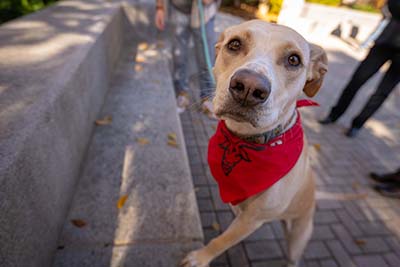 “The night before C-Term started last year, I was looking online for puppies that needed to be rescued—without any intention of adopting, given that I was already a full-time student,” says Jordan Rosenfeld ’21. But that all changed when he laid eyes on Cleo, a lemon beagle terrier mix who'd lost one of her front legs after having been hit by a car. “She was the most adorable puppy I ever saw, and I knew immediately that we were meant to be together. The second I walked into the kennel, she attacked me with love, and we both knew she was ready for her new life.”

At the time, Rosenfeld, who graduated with a degree in mechanical engineering and a minor in robotics engineering, learned he’d been accepted into WPI’s biomedical engineering graduate program. He’d always dreamed of being an engineer in the medical field, but he wasn’t sure where to focus—on product design, on medical devices, on medical robotics—or something else entirely.

Stumbling upon Cleo made the once-difficult decision easy. “She made me realize I wanted to use my education to help animals—and humans—through prosthetics engineering,” he says. “It’s the perfect way to use my engineering skills to help those who are in need of a second chance at life, whether it be an animal or a human.”

A Recipe for Mobility
Building Cleo a prosthetic leg is a passion project, one that Rosenfeld has been making progress on outside of his regular classwork. With occasional help and advice from friends—one of whom even tried to create a prototype for class—Rosenfeld is on his second iteration of a prosthetic design through SolidWorks and hand sketches, with a goal of 3D-printing the final product.

Cleo’s an active dog who loves to jump and play, which is why Rosenfeld is determined to build her a leg instead of a wheeled support. The latest design is a harness that will strap onto Cleo’s body. A built-in shield that will cup around her residual limb features a detachable mounting mechanism to hold the prosthetic limb. 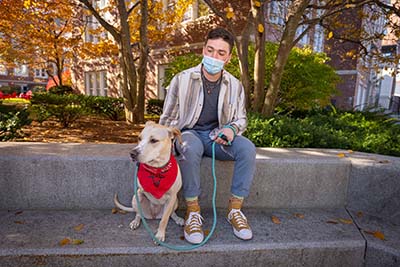 In addition to his passion for biomedical engineering, he’s been able to use what he’s learned from design, robotics, and biology courses to work on Cleo’s prosthetic.

“It’s extremely rewarding to be able to bring my education to the real world,” he says. “I like to think of it all as a recipe: a little bit of math, a pinch of robotics, a dash of biomechanics—throw it into the oven at 375 for 35 minutes, and ding! out comes a new device.”

Toss in a heaping spoonful of love and after a few minutes together, it’s clear how positively they’ve impacted each other’s lives—and those around them. Each of the several students who asked to pet her during their photo shoot for this article was met with an enthusiastic, “Yeah, of course!” from Rosenfeld and a jump up from Cleo.

During quarantine, Rosenfeld says, “We spent every day together, just the two of us,” adding that he worked closely to train her and build her up until she blossomed into the dog she is today. “We practiced going up and down stairs, and I watched her climb them for the first time since her surgery. She also finally became vocal with me, telling me when she’s hungry or needs to go outside for a walk.”

While bits and pieces of Cleo’s future prosthetic are still in progress—Rosenfeld is working to find the best materials he can afford before designing the harness—one thing’s for sure: Cleo is absolutely living her best life with him.

“Oh, she’s totally spoiled,” Rosenfeld laughs. “But she deserves it.”