Northern Ireland recently held its first-ever Science Festival and WPI’s Suzanne Sontgerath, associate director of admissions, traveled to Derry to share ideas and experiences on STEM education with participants during the 11-day event.

“I was invited to share WPI’s story on how we were building relationships and on K–12 outreach and workforce development,” says Sontgerath. She spoke at three events, including a master class that Farry opened to audiences of students, educators, industry leaders, and government officials. Sontgerath was among a roster of educators and executives that included Yvonne Spicer from the Boston Museum of Science; Claire McNulty, director of science at the British Council; and Andrew (Drew) O’Brien, US special representative for global partnerships at the U.S. Department of State. 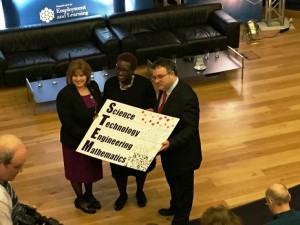 WPI’s relationship with Northern Ireland began more than a year ago when Linda Looft, assistant vice president for government and community relations, and Stephen Flavin, vice president of academic and corporate development, traveled as part of the State Department’s Partnership Opportunity Delegation to Northern Ireland to explore entrepreneurship and STEM education. Farry visited WPI last year and was particularly interested in WPI’s approach to STEM outreach and partnership funding opportunities.

Ireland is looking for ways to develop industry relationships that can lead to funding of STEM initiatives, says Sontgerath. “The K–12 pipeline can’t be all government funded,” she says. “They are looking for more relationship building between industries and education to develop that pipeline.” Sontgerath used WPI as an example, based on theory and practice, of how to nurture industry sponsors on many levels, from elementary outreach through MQPs and IQPs. “Very often a corporation sponsors a partnership and it’s a win-win partnership,” says Sontgerath. “Industry gets to the talent sooner.” 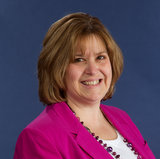 But learning how to get those initial engagements established is tough. In Northern Ireland, there’s less philanthropic interest from industry, so the culture isn’t the same as what WPI typically encounters, she says. Sontgerath explained to audiences how small inroads can lead to larger involvement. “WPI is very successful in helping our corporate partners develop where they want to be engaged,” she says. “It’s not always about the money.” If corporations devote time at a career explorations dinner or allow a field trip group to visit, a relationship can start to develop without a financial commitment. “You can plant the small seeds,” she says.

All that movement forward helps with what Sontgerath says is Northern Ireland’s overall goal of workforce development. When those newly graduated students emerge with STEM-based degrees, the country wants to make sure they can find jobs in their home country and not leave to find relevant work. 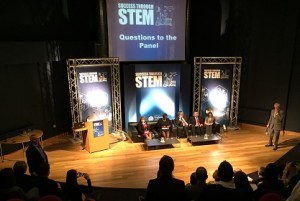 As a WPI alum, Sontgerath was especially pleased to be able to talk about WPI’s success with STEM. It was interesting, she says, to see that the countries have many of the same issues, like gender inequality in STEM fields or even image issues in the fields.

Participating in the Science Festival was also just a fun way to see how another country generates interest in STEM issues. A 1,339-strong student group even set a world record for the largest simultaneous science lesson. “I am impressed with the fact that they are a smaller government and they have the ability to get more boots on the ground and get involved on all different levels,” she says.

Sontgerath looks forward to watching the collaboration grow. “This is truly an opportunity for us to learn in both directions,” she says.