Imagine having your car shut down as you motor down the highway. Pretty scary, right? Now imagine flying a fighter jet tens of thousands of feet in the air and having the same thing happen. With increasingly sophisticated cyber attacks, the terrifying scenario is no longer a storyline from a far-fetched spy novel.

ROTC cadets from Worcester recently participated in a cybersecurity lab at WPI where they navigated potential cyber threat scenarios and used tools and their own knowledge to solve them.

“One of the things we try to do is develop our students’ critical thinking,” says professor and department head of aerospace studies Lt. Col. Michael DeRosa, commander, Detachment 340 Air Force ROTC. “This ties right in with project-based learning.”

Thirty-six cadets from WPI, Holy Cross, Quinsigamond Community College, and Becker College participated in a cybersecurity lab at WPI that brought in personnel from the Air Force Research Lab in Rome, N.Y., and expert assistance from a U.S. Air Force Weapons School graduate of the 102nd Intelligence Wing (Cape Cod).

This kind of exercise supports WPI’s developing cyber degree efforts and also helps out the forces where the need for cyber security experts is growing.
Lt. Col. Michael DeRosa

The cadets applied their classroom skills toward an actual result within a group effort. They learned just how cyber technologies can be both an asset and a liability in military operations, and the lab familiarized them with the military’s decision-making process and course of action preparation.

Colleagues at the Air Force Research Lab built an exercise to mimic the intense, short time span to make decisions in potentially real cyber threat scenarios. And while the Rome Lab has a close relationship with WPI, this was the first exercise of its kind it has done with any university. 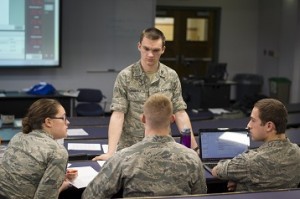 Scheduled during the normal class time, the students received “read-ahead packages” prior to the lab, but not much other information. “They knew they would have to have a plan, but not what they needed to achieve,” says DeRosa.

Each information package gave facts including the environment and the players, but cadets know situations can change quickly. DeRosa says providing in-class critical thinking exercises is an important part of the course work, and he wanted to provide a way for cadets to sharpen their critical thinking with a two-hour exercise in a mock airspace and cyber domain.

“We used a fictitious country and a fictitious adversary country,” DeRosa says. Providing unclassified background information and unclassified defensive cyber tools, the students were asked how they would address the posed problem and then had to plan a solution. Cadets were assigned roles such as legal advisor, political advisor, war gaming specialist, and weaponeer. There was even a cadet in England who acted as an allied advisor and was brought in through a Skype-like technology called Defense Connect.

Cadets had a few surprises thrown in, as well. While one junior cadet acted as the director of cyberforces, five sophomore team leads headed up groups of four or five students including upperclassmen. Cadets had to adapt quickly to the role reversal so they could effectively complete their tasks. 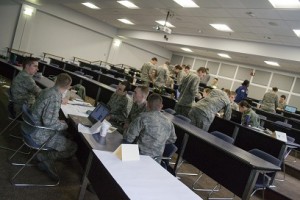 Cadet Jonathan Comden, a WPI sophomore, led a team and although instructing upperclassmen was slightly intimidating at first, it worked because of the mutual respect among the cadets. “I learned that if you really trust the people under you and you don’t look over their shoulders all the time, they will get stuff done faster than if you were micromanaging,” he says.

Using butcher block paper to organize ideas, the teams set to work to understand the problem, assess the situation, and figure out the players involved and the rules those players were using. While DeRosa says he was confident the cadets would do well, the students’ approaches were impressive. “They showed thoughtfulness, critical thinking, and restraint,” says DeRosa.

Cadet Richard Seery, a Holy Cross junior, was in charge of helping all the teams prepare the best possible briefings and arguments. “This was effective at building leadership,” Seery says. “We can teach you the ins and outs, but not leadership unless you are put in those awkward situational positions and unless the pressure is turned up all the way in that short time.”

All teams had to present a briefing and make the case for their courses of action to a commander. “The students came up with fascinating ideas,” says DeRosa. “What was significant is usually the services don’t teach these constructs for planning until they are majors or colonels. The students could come together and think and develop courses of action that made sense and met the objectives of the exercise.”

And DeRosa is proud of the cadets’ work. “I love bringing Air Force experts here to see WPI and the caliber of the students,” he says. This kind of exercise supports WPI’s developing cyber degree efforts and also helps out the forces where the need for cyber security experts is growing.

Cyber security is a compelling issue, says DeRosa, and one where he could use the strengths of the cadets to meet Air Force and WPI objectives. “Not only did they do it,” says DeRosa, “they did it well.”

As Seery says, preparation is key for real life. “There are lots of variables coming at you,” he says, “but you still need to get the job done. That’s the mission for our cadets.”