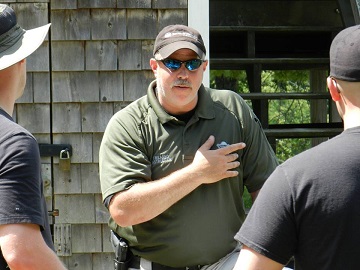 Over the past decade, 82 percent of people with concealed firearms who entered a Massachusetts school campus were able to do so without issue. In that same time period, 80 percent of those who provoked an active-threat situation were students, or had been students at that school.

This data was compiled by the Commonwealth Fusion Center, which provides statewide information to first responders, private groups, and others on threat information as it relates to public safety and terrorism.

Sgt. Michael Jacobs of the WPI Police Department pays attention to such data, and wants to share his wisdom on active threat situations with the campus community. Over the next few weeks, Jacobs and Officer Stu Fuller, both of whom have specialized training in active shooter instruction, use of force and firearms, will host three sessions on active-threat situations.

“Though it’s not a probable occurrence, it’s still a possibility,” Jacobs says of an active threat at WPI, which could mean a shooter, workplace violence, or other potential situations where public safety is at risk. “It’s unfortunate, but we’re seeing more and more of this every day … and the likelihood of a first responder getting there in time is not good, with injuries or fatalities possible in the first few minutes of an incident.”

Campus police have hosted active threat information sessions for more than a year, and aim for six sessions each year. Jacobs and Fuller have reached out to Greek Life as well, holding sessions in fraternity houses, and are happy to speak to groups on campus.

“Between Officer Fuller and me, we have hundreds of hours in active shooter instruction, training in use of force, firearms. We want to impart this wisdom and be helpful,” Jacobs says.

People are naturally on more heightened alert to a shooter or other threat in their midst, Jacobs says, due to the onslaught of such tragedies around the nation, especially the Newtown school shootings. He regularly adjusts opening remarks in his campus sessions to reflect the most current incidents.

Just this past week, in Franklin, a 27-year-old man was arrested for entering an elementary school where he had no reason or authorization to enter. He did not have children at the school, and he has been charged with trespassing.

Jacobs says there are no precise instructions he can give on how to respond to an active threat: it depends on the situation, and the fact is, the dynamics of such an incident are always changing, such as a shooter running from place to place, for example. But he does speak of a “run, hide, fight” mentality, with fighting as a last resort. With more stories in the news of citizens apprehending suspects on their own—especially with muggings or store robberies—Jacobs says it does appear to be a trend. “[These suspects] don’t stop until confronted, and I think that word is getting out,” he says.

Things to keep in mind in an active threat situation, according to Jacobs:

The WPI active threat sessions are from 11 a.m. to noon, in the Forkey Conference Room, Harrington Auditorium, on Thursday, March 12; Tuesday, March 24; and Friday, April 17.

In addition to the sessions, campus police have a Rapid Response Team with additional training to act as a lead on each shift in case of an active threat. “It takes [our efforts] a step further,” Jacobs says.