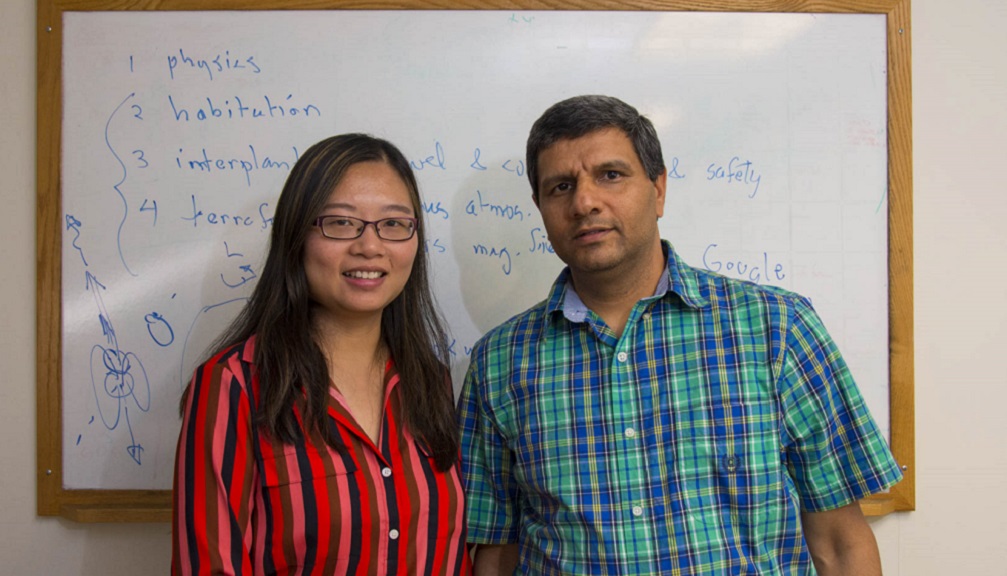 The stars—or in this case, the moon and the sun—are aligning just in time for WPI’s first-year students. A solar eclipse will be visible on the afternoon of Monday, Aug. 21, just one day after move-in, and witnessing a historic moment seems like as good a way as any to ring in the new school year.

Although Massachusetts isn’t part of the belt of states along the path of totality, we’ll be treated to a 63 percent partial eclipse, a remarkable sight in and of itself. Assistant teaching professors of physics Rudra Kafle and Shanshan Rodriguez took some time to fill us in on what we can expect from Monday’s events, the history of eclipses, and just how risky it is to look at one without proper eye protection (hint: don’t do it).

Total Eclipse of the Sun

Despite what the Bonnie Tyler song might have you believe, eclipses don’t have anything to do with ill-fated love. “Solar eclipses happen when the moon passes between the earth and the sun, creating an obstruction between us and the sun,” Kafle says. Fourteen states will experience a few moments of total blackout on Monday, but for residents of Massachusetts, he says the sun will look more like a crescent moon, or like it’s had a bite taken out of it.

Partial eclipses occur two to five times a year, while a total eclipse occurs only every 18 months, Kafle explains. Rodriguez adds that they’re still considered to be somewhat rare for people in the U.S. mainland to see, given the fact that their trajectories could take them over open oceans, which cover most of the Earth’s surface.

The last solar eclipse that was visible from anywhere in the continental United States took place almost 40 years ago in 1979; luckily, we won’t have to wait that long for the next one. “We’re expecting the next one in 2024,” Rodriguez says, and explains that its predicted course suggests that it will be much closer to Massachusetts than Monday’s.

While Kafle and Rodriguez both stress that the event will be awe-inspiring fun for anyone who checks it out, they’re quick to emphasize the importance of safety while doing so. “No matter where you’re viewing the eclipse from, don’t look directly into the sun,” Kafle says. “These effects can cause permanent damage.”

Glasses with NASA-certified solar-filtered lenses have been sold out for weeks (even the Physics Department couldn’t get ahold of a few pairs in time), but both professors warn that sunglasses or homemade filters don’t provide near enough protection, and aren’t acceptable substitutes.

Counterfeit glasses have been flooding the market; an easy way to ensure that your pair is real is to check for ISO 12312-2 compliance, a designation that should be printed on the glasses. Additionally, everything around you should look completely dark.

If you haven’t been able to grab a pair of authentic glasses or if have concerns about whether yours are real, you’re still in luck. “You can create a pinhole projector out of a box, or view the eclipse through cameras, binoculars, or telescopes,” Rodriguez says, “but only if they have solar lenses.”

Even if all you decide to see is the different kinds of shadows produced by the eclipse, there’s also the option to watch the entire eclipse online, thanks to a livestream from NASA.

Where to Watch, What to Look For

While you’re watching the moon pass in front of the sun, causing the area to be cloaked in twilight, be on the lookout for bats, owls, and other nocturnal animals—there’s a chance they’ll become confused by the darkness and start wandering outside in the middle of the afternoon.

No matter how you decide to watch the eclipse, stay safe, have fun—and we’ll see you on the other side.