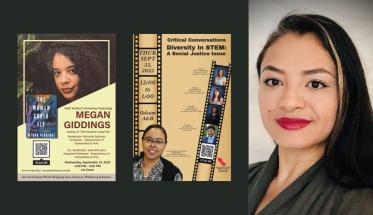 Sowing the Seeds of Belonging at Arts & Sciences Week

When Arts & Sciences Week started five years ago, it aimed to highlight the breadth and depth of innovation, research, and project-based learning at WPI in the arts, sciences, social justice, and humanities. The event offers opportunities for community members to engage, socialize, and examine pressing topics through open dialogues.

Jean King, Peterson Family Dean of  Arts & Sciences, said this fall’s Arts & Sciences Week, which runs Sept. 19-23 and is open to all members of the WPI community, is a celebration of faculty, staff and students, and undergraduate student research.

The week will include faculty and staff appreciation breakfasts, and student “lightning” project presentations. King said celebration of the arts & sciences is also a way to foster the connections that could help keep someone in the field, in the classroom, or on the faculty.

The featured lectures and dialogues during Arts & Sciences week will focus on conversations surrounding diversity, equity, and inclusion efforts in STEM, and will examine challenges faced by members of underrepresented groups.

It’s about including different voices in the narrative

King said that after being trained in STEM-related fields, women and people from communities of color tend to leave for non-STEM fields at disproportionately higher rates.

“It’s not about intelligence or ability; they’re getting the degrees” King said. “It’s that they don’t feel like they belong. When they show up in the many STEM communities, they look around and say it’s not for me—nobody looks like me, there are no role models, I don’t enjoy coming to work, I don’t feel included.”

Scheduled speakers at Arts & Sciences Week include a Latinx math professor, a critically acclaimed author, and a documentary filmmaker; all three will focus on how to better include women and people of color in STEM-related fields and in academia.

“It’s about including different voices in the narrative,” King said

Documentary filmmaker Kendall Moore, a journalism professor and film faculty member at the University of Rhode Island, will screen two documentary films in her “Can We Talk?” series: a look at the issues surrounding low representation and poor retention of underrepresented people of color in STEM, and an exploration of the idea of white allies in science and how they can help recruitment and retention efforts.

Moore said there are many barriers to inclusion in STEM fields, from systemic factors to linguistic and cultural issues.

For example, laboratories, traditionally regarded as objective, transactional spaces, are cited by members of underrepresented groups as the source of cultural and psychosocial barriers, Moore said. Scientists and researchers are trained to run labs as objective, science-seeking spaces with no room for emotions or identity. That’s starting to change; people want to bring their whole selves into these spaces.

“If we close the door on these folks, that means we’re closing the door on the big picture, the biggest story, which is, to me, the inclusive story,” Moore said.

King said that with 2 to 3 million STEM jobs expected to be available by 2025 and only around a million candidates being trained right now in the U.S., something has to change, and part of that change is opening up to voices at the margins. Research shows that a diversity of perspectives increases innovation, she said.

The week also serves as way to welcome new faculty to the arts and sciences.