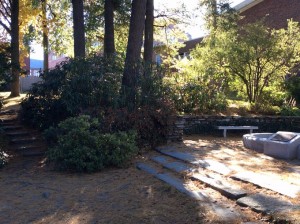 All WPI community members are assuredly familiar with the fountain at the center of campus, which buzzes with conversation and activity on all but the snowiest of school days. However, many are not aware that WPI is also home to another fountain that offers a very different experience.

Tucked away behind Higgins House is the Adam El-Khishin Meditation Area, a quiet space featuring a reflecting pool with a gently bubbling fountain at its center. The area, which almost appears to be hidden, is located at the end of a tree-lined path that can only be accessed by taking the steps down from the Higgins House courtyard gardens.

The strategic location of the spot reflects both its solemn history and calming purpose. It was established in 2001 in memory of Adam El-Khishin ’99, who died in a car accident in January 2000 when he was a first-year medical student at Washington University in St. Louis. 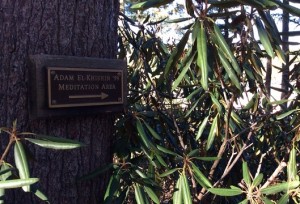 “Adam’s friends and former classmates raised a memorial fund to honor his memory,” says WPI associate dean of students Greg Snoddy. “They used it to fund an annual scholarship but also wanted to create a permanent place on campus where all students, faculty, and staff could go to reflect and have quiet moments.”

The original memorial consisted of a reflection pool surrounded by stone benches and a rock wall embedded with natural birth baths. When it was officially dedicated, more than 75 of El-Khishin’s friends, former classmates, and family members watched as a plaque with his name was unveiled.

While the area has continued to serve as a quiet haven for campus community members, Snoddy notes that both its remit and physical layout have expanded.

“Following its original intent to honor Adam, the meditation spot has transformed into a place to remember all WPI students and recent graduates who have passed away too soon,” says Snoddy.

Over the years, bronze plaques displaying the names of six additional WPI students and alumni have been added to the stone wall. The plaques are generally limited to students or alumni who have passed away within three years of graduation.

“This is a space where current students can come to remember their classmates and friends,” says Snoddy. “It’s the only location on campus dedicated to students who pass away during or shortly after their time at WPI.” 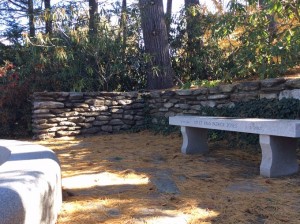 The area also offers an opportunity for friends and family to gather when new plaques are unveiled.

“As part of the plaque dedication we hold small remembrance ceremonies where everyone reminisces and shares stories,” says Snoddy. “Sometimes people come back on the anniversaries of the ceremonies, as well.”

In 2011, the Senior Class Gift restored the area and added the fountain to the center of the reflecting pool. The gift was made in honor of Jonathan Douglas Rowell ’11, who passed away in February 2011. At the same time, a bench was added in honor of 1st Lt. Ryan Jones ’05, who was killed in action in May 2007 in Iraq.

Most recently, a plaque was added in remembrance of Patrick Degenhardt ’16, who died after falling from a parking garage in September 2014.

Snoddy is actively trying to make WPI community members more aware of the area and its history. He plans to put up signs at Higgins House directing people to the secluded spot, which was also featured in this year’s new student scavenger hunt.

“It’s a nice place for students who want to take a break from the stresses of classes and exams, and it provides an opportunity for all of us at WPI to think about how fortunate we are to be here,” says Snoddy.

Along with reviving interest in the meditation area, WPI administrators recently re-activated the scholarship that also bears Adam’s name. This fall, the Adam El-Khishin Pre-Health Pre-Medical Scholarship was given to Kevin Ackerman ’16.

Ackerman, who plans to become a physician, says he feels a connection with El-Khishin through his desire to help others through medicine.

“From what I’ve read about Adam, he possessed many of the qualities and characteristics I strive to emulate. His commitment to education, leadership, community service, and social responsibility provide a model for students pursuing careers such as medicine in which they provide assistance and make a direct impact on others,” says Ackerman. “Adam’s life was tragically cut short and I will surely keep him and the ideals he stood for in my memory as I continue on my journey in medicine.”