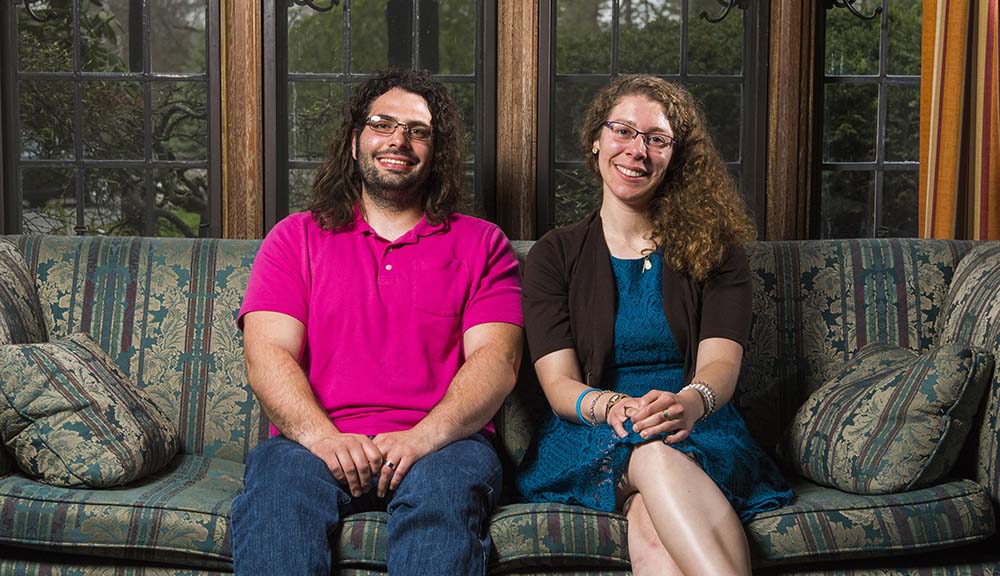 Starting from Scratch: Building AMProtection One Step at a Time

WPI’s superstar researchers Lindsay Lozeau and Todd Alexander never pictured themselves as cofounders of a company that is poised to change the way the medical community considers stopping infections.

Yet here they are.

Their company, AMProtection, has gone through a few changes and pivots to arrive at this point—starting down the road to bring to market a urinary catheter with antimicrobial peptides that will reduce infections without increasing antibiotic resistance. Eventually such a device could save patients the painful and sometimes lethal infections that can happen from catheters.

“We have gone through iterations,” says Lozeau. “We don’t want to become a catheter company, although that’s our first application. We want to be an R&D company that grows in Massachusetts, stays in Massachusetts, and creates jobs here. We both agree on that. It’s nice to finally have that unified idea of what we want to do.”

“It’s not that we agree every time on everything,” says Alexander, “but at the end of the day, I respect Lindsay and she respects me.” Neither takes that lightly. Both spend long hours in the lab and have a relentless drive to build a company. “It’s really important to have a shared vision for what you want to do,” says Lozeau. “Once we wrote that down, it was easier for us to describe what we were doing.”

Product development isn’t a speedy process, nor should it be. But before a product even becomes an idea, it’s often just as a whisper. How long does it take to go from concept to reality? Lozeau and Alexander share some insight to the twists and turns that give an idea some legs.

Alexander graduates from WPI with a BS in chemical engineering. He decides to pursue an MS at WPI.

Lozeau graduates from the University of Rhode Island with a BS in chemical engineering.

Alexander is the tour guide on Lozeau’s WPI tour. When she arrives to begin her PhD work at WPI, Lozeau doesn’t have a project. Dean of Graduate Studies Terri Camesano asks her to collaborate with Alexander on his project.

Lozeau’s research focuses on antimicrobial peptides that will work attaching to collagen for wound dressings with biopolymer-tethered and dressing-tethered peptides. The work is related to Alexander’s, but not directly.

The pair are the only two taking qualifying exams in the spring of 2013. As an instant study group, they realize they have a mutual admiration for each other’s work ethic and grasp of science.

Although Alexander has no intention of getting a PhD, a fellowship with the Integrative Graduate Education and Research Traineeship (IGERT) cohort changes all that. Lozeau happens to be in the same cohort. IGERT is the highly competitive National Science Foundation’s flagship interdisciplinary program for PhD scientists and engineers. “I wasn’t planning to get a PhD, but IGERT was too good an opportunity to pass up,” he says. Eventually, both scholars also secure grants and assistance through NSF’s I-Corps program.

They both joke that on the day Alexander realized he could start a company, Lozeau was the person in closest proximity in the room to him, so he looked at her and asked if she wanted to start a company with him. He knew he couldn’t do it alone and that he needed a team. She said, "Sure," but neither really knew where the company was heading.

Alexander gives a presentation at The Venture Forum’s 5-Minute Pitch contest for AMProtection. At this point, the pitch is focused on orthopedic devices that are inside the body.

AMProtection doesn’t win the pitch contest, but does grab the poster presentation prize. They continue to focus their research, experimenting with applying the antimicrobial peptides to various materials.

Alexander’s I-Corp fellowship galvanizes the pair and helps potential funders understand the direct use of the product.

The duo continues to sharpen its focus and presentation skills. One of the biggest changes happens here: the company’s pivot from orthopedic use to catheter-based infections. The changed focus is backed up by dozens of customer interviews and business model development.

Lozeau and Alexander start the first round of funding and continue to gather information from mentors, business leaders, and faculty advisors.

They gain steam as they notch a first-place spot in the i3 pitch competition at WPI.

The third time’s the charm as AMProtection returns to The Venture Forum’s 5-Minute Pitch contest and walks away with first place. They also capture the poster presentation prize.

AMProtection wins the Hitchcock Innovation Prize this year, which also names them Hitchcock Fellows. This rapid-fire succession gives Lozeau and Alexander pause. They start to realize that not only are they on to something, but they are good at the business and the science. “It’s exciting and nerve wracking at the same time,” says Lozeau. “We realized this is more serious than we thought.”

In December, AMProtection closes out the year with a first-place finish in the TechSandBox Pitch competition.

There’s no doubt balancing the development of AMProtection and completing a PhD is challenging. Although both have the same common elements and research in mind, the final goals, outcomes, and requirements of both undertakings are distinctly different.

Already a close pair, they see each other’s reactions under real pressure and the results impress them. “When you share a traumatic experience of a PhD you bond,” jokes Alexander.

In November, Lozeau finishes her PhD studies in chemical engineering and soon begins teaching as an adjunct professor at Quinsigamond Community College.

Alexander is on track to finish his PhD studies in innovation and entrepreneurship in biomolecular engineering in the summer.

On April 6, they win the National Academy of Inventors student innovation showcase in Washington, D.C. (The showcase features six student teams from across the United States who present inventions with medical implications.)

AMProtection begins a new round of seed funding to get ready for the next stage. The product needs to undergo animal testing next on its way to potential human use. They will continue to look for partnerships and to secure patents as their platform for this innovation grows.

It’s cool to have the path in front of you to pave rather than walking on a paved path. In our case, having opposite personalities works. Just find a business partner who challenges you and will make you better.
Lindsay Lozeau
We are [opposites] but we complement each other a lot. It’s important to find the right team and to find the people who will walk through the fire with you.
Todd Alexander 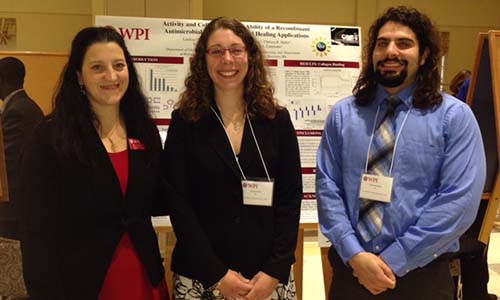 Support Along the Way

Help and support at WPI has been invaluable to Lozeau and Alexander. Without the advice and encouragement of the technology transfer office, business faculty, the Tech Advisors Network (TAN), Todd Keiller in the Office of Intellectual Property and Innovation, and Dean of Graduate Studies Terri Camesano, both Lozeau and Alexander say AMProtection wouldn’t have gotten to this point. “Terri recognizes how important it is for us to become independent researchers,” says Lozeau, “which is the whole idea of a PhD program. While she advises us, she also lets us succeed and struggle on our own.” 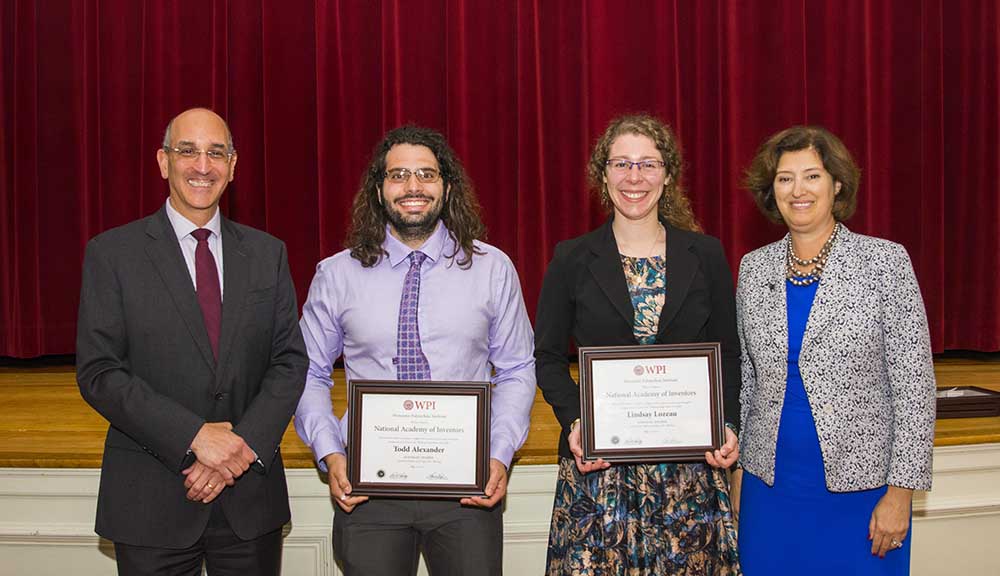 Lozeau and Alexander were among 42 WPI students who became honorary NAI members after filing for patents last year—the highest numbers in WPI’s history. They were honored in May at the annual meeting of WPI’s chapter of the National Academy of Inventors, which was attended by Drew Hirshfeld, commissioner for patents at the U.S. Patent and Trademark Office.