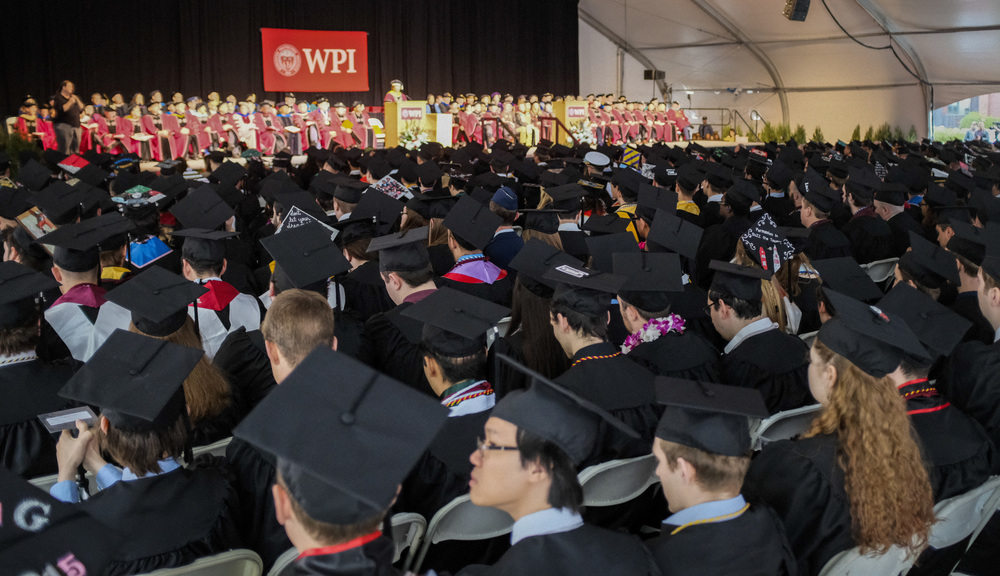 Impact at WPI? It’s This.

WPI students change the world. We all know that. But as each new crop of graduates emerge from WPI with new skills and new discoveries, we are impressed by their grit and their accomplishments.

President Leshin highlighted some of these students in her two Commencement speeches this year. These six students are making an enormous impact with their drive, passion, and WPI education. And they have all come to the end point a different way. Some followed a more traditional path while others came back to finish a degree first started decades ago. Some have been on campus, in the labs at all hours, while one completed a degree from Alaska, never once having set foot on campus. Their successes are personal and meaningful in many ways.

After having spent her entire life in Worcester, Ama Biney is about to launch. She’s heading to Florida for the Operations Leadership program with United Technologies, where she’s excited to see what’s next.

But this opportunity and experience is something she never could have imagined four years ago.

As a superstar athlete before she even hit the basketball court or the softball field at WPI, Ama says she wasn’t one to ask for help. “I was pretty stubborn,” she says. But at WPI, she branched out of her comfort zone and realized how much others make life easier and better. “We need other people,” she says. “Teamwork is how everything runs.” Ama participated in the Trustee Mentor program, declared a management engineering major, held an internship at the Hanover Insurance Group, and became active in various clubs—all while remaining a standout WPI athlete.

“There is always something going on at WPI,” she says. “Sports is the world I know. But as I was talking to different people or joining clubs, I was getting to know the world outside of sports. I was learning there is more to me than just dribbling a basketball or hitting a softball.”

A child’s sense of wonder during a family trip to Disneyland started Kelly Carlson on a path to her dream job. WPI provided the support and guidance to get there.

“There are so many here who want to see students be successful,” says Kelly, who has wanted to work at Disney since that trip and studied mechanical engineering to make it happen. “That’s what makes WPI such a special place.” Thanks to the direct efforts of many at WPI, Kelly was able to turn uncertainty into success, but the path was far from direct. An internship at Disney a couple of years ago led to acceptance into a Disney co-op. But word about the co-op didn’t come until two weeks before senior year kicked off. With classes, leadership roles, and her sorority activities all in place, she had no idea how she could make it work.

Her advisor gave her sage counsel. “Accept it and we will figure out the details,” he said. “We will make it happen.” That mindset, says Kelly, is how WPI works. “So many departments worked with me and it just felt like the whole world was reaching out to support me and to make sure I could do what I wanted,” she says.

Kelly starts her new job as a mechanical and animation engineer at Disney this July and admits WPI taught her to stretch, too. “Sometimes you have to throw it to the wind and see how it goes,” she says. “You have to let life go and enjoy those moments.”

When David D’Antonio left WPI he didn’t imagine he would receive his bachelor’s degree in computer science almost 40 years later. Unable to afford tuition, D’Antonio moved into a successful career as a software engineer for companies like Digital Equipment Corporation and Zipcar.

But his unfinished degree bothered him. “It was on the life to-do list,” he says. He had outside influences, too. “My [late] Aunt Molly would bring it up every once in a while,” he says. “She’d say, ‘I’ll buy a new dress for your graduation.’” When his partner, Rachael, who worked in higher ed, landed benefits that included taking classes, thoughts of that unfinished degree led D’Antonio back to WPI to start classes in 2016.

The diploma holds significant personal accomplishment. “For me, the electives I took and the projects I did confirmed to me that I’ve still got it. I can still go to class and do the work in a college-level class.”

At this point, the degree itself isn’t going to change his career path. But is has an important impact for the future. “This opens up continuing education for me,” he says, “because all of those programs have a bachelor’s degree as a prerequisite.”

And his new skills are a boost. “On the job, now I have the terminology and the credentials,” he says. “There is a big difference in the level of confidence I have in myself.”

While at WPI, chemical engineering PhD student Lindsay Lozeau discovered two new peptides that could revolutionize antimicrobial materials. On the basis of that research, Lindsay and her fellow WPI research partner Todd Alexander formed AMProtection, which they plan to elevate to a standout R&D company. But WPI is where it all began.

Lindsay knew WPI’s approach was different when Dean of Graduate Studies Terri Camesano reached out to her personally to encourage her to come to WPI (“no other school did that”) and then gave her increasing responsibility in the lab when she studied here. “I felt welcomed here from the very beginning,” she says. “I felt important.”

For those deeper personal connections that build a community, Lindsay made real efforts to connect with others, eventually founding WPI’s Chemical Engineering Graduate Organization. “That was really to bridge the gap between [students in] Gateway and [those in] Goddard,” she says, and the group often met for karaoke or frozen yogurt trips. The obvious bonds between members also caught the attention of prospective students. “They saw we were really close friends,” she says of talking with students considering WPI, “and said, ‘That made us comfortable and we wanted to be a part of something like that.’” As a mentor to undergraduate students and inspiration to countless others, Lindsay’s impact at WPI is immeasurable.

As WPI’s first PhD recipient of a mathematical sciences degree with a discrete mathematics focus, Tyler Reese believes the university’s academic challenges are balanced by the shared educational circumstances of the campus.

“In my experience, the essence of the WPI community can be summarized in a single word: curiosity,” he says. “Among the faculty, graduate students, and undergraduates alike, there is an undeniable sense of wonder; the need not only to know what, but the need to understand why.”

Throughout his studies, which could involve months of work on problems that only he and his advisors grasped, Tyler says understanding the final goal is imperative. “As a PhD student, I learned the importance of perspective,” he says. “It is often said that ‘knowledge is power,’ but knowledge in a vacuum—knowledge without the proper context—is easily lost. We must always seek to understand how our ideas fit within the bigger picture."

With professors Joseph Fehribach, Randy Paffenroth, and Brigitte Servatius, Tyler became part of an active research group at WPI that formed based on his keen interest in discrete mathematics. “The four of us have met weekly for the last five years,” he says, “and I consider the time I spent under their guidance to be the most rewarding experience of my academic career.”

When Daniella Shepard walked across the stage to receive her diploma at Commencement, her visit was the first ever to WPI. With a home base almost 5,000 miles away in Prudhoe Bay, Alaska, getting to Worcester (or as she first pronounced it years ago, “Worchester”) just wasn’t an easy option for this online student.

“Trying to do this at a regular university where they expect you to be on campus? There would have been no way,” she says. “I wanted to go for my MS, but it needed to be online so I could do it while I worked and so that it fit with my really weird schedule.”

As an electric equipment class owner at BP’s Prudhoe Bay site, Daniella works eight 12-hour shifts, then four 8-hour days, then has nine days off, but she's on call 24/7. Scheduled class times aren’t an option given the unpredictable nature of her work. “My shift usually starts around 5 in the morning, so I would set my alarm as early as 2 am to start my work, and I would just keep chipping away at it.”

As she did, the projects helped her connect the dots in her own work. “I used to see what was happening on the power grid and wonder why that was happening,” she says. “Now, it’s nice to know more of the why.”

Daniella’s degree is helping her reach her objective. “My ultimate goal,” she says, “is to change the way people think about how they use power.”