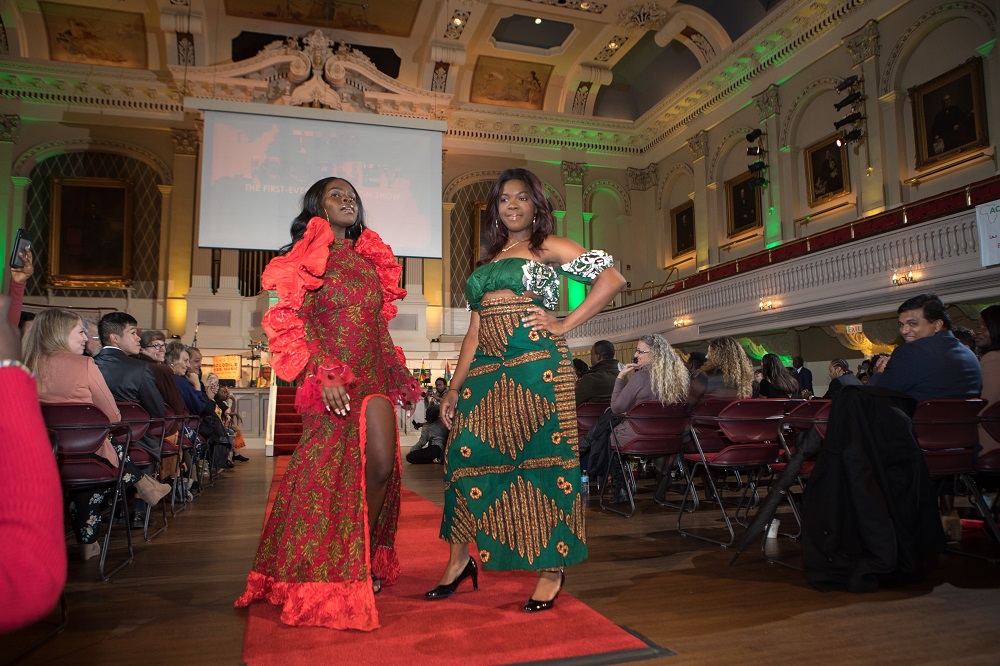 WPI students, from left, BSU president Mbolle Akume '20, and BSU vice president Rejoice Attor '21, at the end of the runway during the fashion show.

The symbolism on the catwalk at the African Community Education’s fashion show and gala last month was as vivid as the brightly patterned Eldior Sodeck Designs the models wore.

“It was kind of like a mirror, basically—what the ACE students envision when they grow up and the WPI students representing what they can be in the future,” said fashion show participant and BSU president Mbolle Akume ’20, who immigrated as a child with her family from Cameroon.

“The juxtaposition of it made it something more than just a fashion show,” she says.

ACE was founded in 2006 to help African refugee and immigrant children succeed academically and prepare for life after graduation. Worcester is one of the largest hubs in the U.S. for African immigrants. Some 20,000 city residents were born in Africa.

The WPI Step Team, The Crimson Steppers, performing on stage at Mechanics Hall.

The nonprofit offers after-school and Saturday sessions, mentoring, summer reading and workforce development programs, as well as English as a Second Language and citizenship classes for parents. ACE serves around 550 African immigrant youth and adults each year.

WPI, with its commitments to broadening students’ global and cultural awareness and serving academically talented students who face financial and social barriers to college, emerged as a natural partner to the nonprofit.

It was student groups that led WPI’s involvement with ACE. Members of the Black Student Union, the National Society of Black Engineers (NSBE), the African Student Association, and Beta Theta Pi became active fundraisers and volunteers for the organization.

“It is really inspiring for our students to be able to relate to someone who is like them in many ways and is pursuing a college degree at a world-class institution like WPI,” says ACE Marketing and Fundraising Manager Tim O’Neil ’14 (BS BME), ’15 MS MG.

One of those ACE students who saw his future at WPI was Daniel Mbusa, who was 13 when his family settled in Worcester from Uganda. While his education in Uganda was rigorous, it emphasized memorization rather than “learning to think,” he says. He realized this in high school and turned to ACE for homework help and tutoring, and enrolled in the nonprofit’s Saturday English and STEM classes.

“That’s the way I developed an interest in science and technology,” he says. When Mbusa reached his senior year at North High School in Worcester, a mentor at ACE guided him through the college and scholarship application process.

The support was critical to his being accepted into—and paying for—WPI, he says. Mbusa is now in his second year, majoring in biology and biotechnology.

“I’m thankful I went to ACE and got connected to people who have been very helpful in my journey from high school to WPI,” Mbusa says.

ACE’s annual gala is the nonprofit’s largest fundraiser of the year. WPI became more heavily involved with the event in 2017, and this year the division was a title sponsor.

“We’re committed to this critical work not only as a moral and ethical obligation to create more access and opportunity, but to highlight the incredible beauty of diversity within the greater Worcester community,” says Rame Hanna, WPI’s Director for Diversity and Inclusive Excellence. “It’s really led so much by our students on campus who want to work with the local community and want to create positive change working with and for others.” 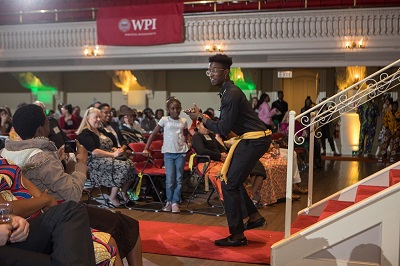 This year’s gala raised $62,500, exceeding ACE’s fundraising goal for the event, due in part to the logistical, creative, and other support offered by WPI and its various student groups, according to O’Neil.

The evening’s entertainment included performances by the WPI Step Team and the African Percussion and Dance Ensemble. It was the idea of Bonnie Walker, ACE board member and former executive director of diversity and inclusion strategy at WPI, to incorporate the BSU annual fashion show into the gala, but on a smaller scale and with the symbolism of pairing BSU and ACE students on the runway

The evening’s theme, “The Journey,” was emphasized with short bios of each of the young fashion show participants. Emcee and NSBE president Kristophe Zephyrin ’21 introduced the ACE students by their countries of origin, their current interests, and their hopes for the future.

Akume shared the stage with two sixth-graders from Worcester’s Canterbury Street School—Nathan (who lived in Kenya and Rwanda and wants to be an astronaut) and Jespin (who lived in Chad and the Central African Republic). Jespin is debating whether to work in technology or to become a martial arts director when he grows up.

“Here we were—the engineers who attend this amazing college, and the ACE students, still young, still growing, figuring out what they want to be when they grow up,” Akume says. “We are the people who they see as mentors now, and who they also can become in the future.”