A Show of Solidarity

Demonstration of solidarity organized, conversation on race and diversity to be held Thursday 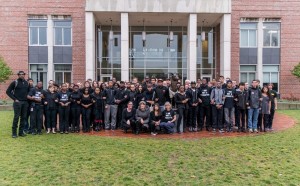 Students, faculty and staff gathered on the
Quad for a photograph to show solidarity with
students of color at campuses dealing with racial injustice.

The WPI Chapter of the National Society of Black Engineers and the Black Student Union on Thursday organized a demonstration of solidarity in support of students at the University of Missouri, Yale University, and other colleges who are experiencing backlash because of recent racially charged events. Many WPI students, faculty and staff wore black in solidarity against racial injustice.

President Laurie Leshin also sent a message to the WPI community pointing out that racism is not limited to those campuses that have been the subject of media coverage, and called for a set of conversations on the topic of race and diversity at WPI. The first of those conversations will happen on Thursday, Nov. 19, from 5-7 p.m. in Alden Memorial. “That discussion will include sharing thoughts and experiences from members of our community … and other initiatives that are underway to make our community more diverse and inclusive for everyone,” Leshin said in her message on Friday.

“Although some members of our community may be of the mindset that this issue is ‘out there,’ and ‘not here,’ WPI is not immune.”

A Conversation About Race and Diversity

A gathering of students, faculty and staff clothed in black on the WPI Quad last Thursday posed for a photograph to show solidarity with other students of color at the University of Missouri, Yale, and other campuses dealing with racial injustice. The event attracted mostly students, but there were a number of faculty and staff that joined in the rally. The event was not officially sanctioned by the university, but employees were notified with a note from Kris Boudreau, chair of the Humanities and Arts Department.

It was initiated by student leaders during a Black Student Union (BSU) meeting, and the National Society of Black Engineers (NSBE) then became involved. Overnight, through texts and emails, word of the event spread through the student body. In order to be welcoming to as many students as possible, it was scheduled for a time between classes.

Antoine Crews, president of the BSU, said that the point was to raise awareness of the issue of racism. It was to be a grass roots acknowledgement of the struggles that had sparked similar support rallies at campuses across the nation in the previous week. 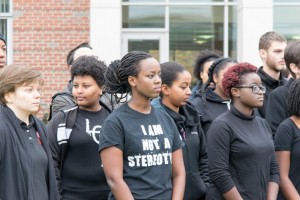 Thursday’s demonstration was a grass roots
acknowledgement of the struggles that had
sparked similar support rallies at campuses
across the nation.

It was a ‘demonstration’ by the classic definition of the word: a quiet, student-led gathering of those in alliance with the principle of resistance to intolerance. There was no chanting and few placards on display, but there was no mistaking the number of the people in black marching from the Fountain to the Gompei statue. Many students who could not attend wore black to classes in a show of support. Crews said that overall, it went “very well.”

Bonnie Walker, director of the Office of Multicultural Affairs, called the event “fabulous.” She saw it as an opportunity for support and engagement of an underrepresented portion of the university community. “The positive tone of the rally was inspiring,” she said, and that it fit with the university’s mission to teach life lessons and diversity. WPI is sponsoring a climate survey to investigate the implementation of various topics of inclusion, including gender, immigration, and racism issues. Many of these topics have already been explored in the “Can We Talk” series and workshops which are offered every term.

Crews said that students have discussed culturally sensitive subjects like sexual assault in terms of moral responsibility before, but he added that it is now time for students to stop being bystanders when it involves racism.

This was a peaceful convergence highlighting the struggle of people involved in the continuing conversation. It was also a photo shoot spotlighting people who have already been engaged as a part of the solution.

Leshin said that diversity really matters, and at WPI this is especially true because the community is focused on addressing the world’s greatest challenges. The innovative thinking required to do so arises from inclusively bringing diverse minds together. “Collectively we have the power to effect positive change so that all members of our community experience a safe and respectful campus environment,” she said. “We can only achieve this through ongoing healthy dialogue and focused action.”