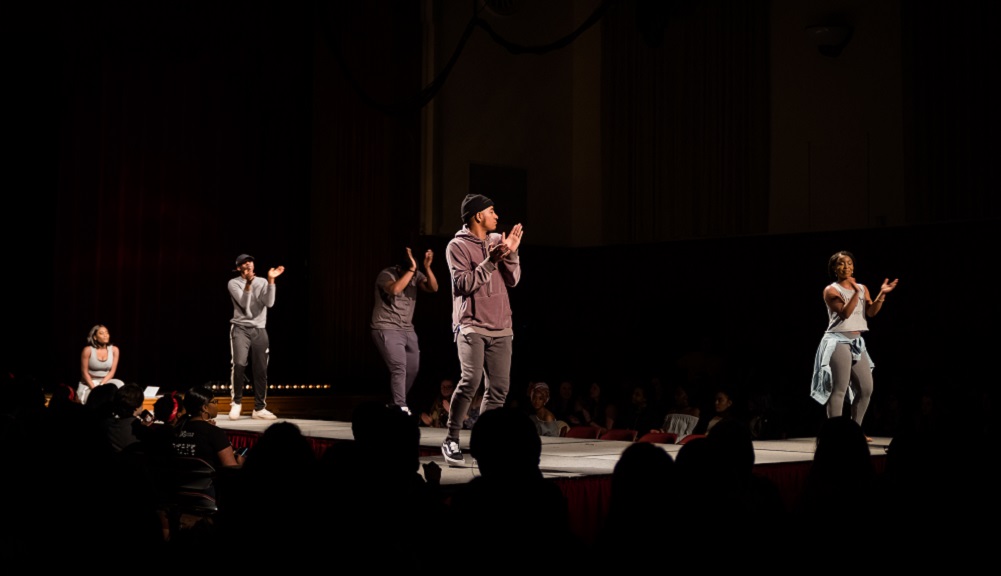 Showcasing Cultures in the African Diaspora

The Black Student Union (BSU) transformed Alden Memorial into a New York City–style fashion venue for its second annual fashion show and concert that quickly sold out, more than doubling its size over last year.

Alden was decked out with audio/visual and lighting capabilities to spotlight 50 models on the runway wearing fashion lines by eight designers and for multiple performances.

BSU president Nde Aghanui Nkimbeng ’18, event founder and organizer, said around 200 tickets were sold last year and two designers and 30 models participated. The event had a theme of unity and diversity, he said, showcasing all cultures at WPI.

This year’s theme showcased cultures in the African Diaspora, a term used to describe the coerced movement of Africans in various slave trades, voluntary migrations from Africa, and population movements within Africa, Nkimbeng explains.

Nearly 3 percent of the WPI student population is black/African-American, he says.

“I wanted to be more specific and less broad,” says the mechanical engineering major.  “At WPI, the percentage of students who come from the African Diaspora is not that much and sometimes there are not programs tailored toward that community. This event focused on showcasing that culture to make everyone feel welcomed. It was a social event, and at the same time, an educational event for anyone to take part in.”

Nkimbeng, whose parents immigrated to the U.S. from Cameroon, says he joined the BSU his freshman year to meet more people of color on campus. BSU has about 60 members, he says.

“When I went to Lowell High School, it was a very diverse school,” he says. “My high school had a lot of Hispanics, blacks, and whites, and I really liked that. When I came to WPI, they say it’s diverse because there are a lot of international students, but there are not a lot of black students. Joining the BSU, I got to meet unique people in a social environment.”

Though there are not many black students on campus, Nkimbeng says WPI works hard to make sure everyone feels included.

“I’m going to miss it when I graduate,” he says. “I’ll miss the opportunities WPI gave me for growth in regard to leadership and professional goals. The internships and job opportunities—I don’t know if I would have had those if not for WPI.”

He remains hopeful the fashion show will continue after his graduation and become a regular event.

“When I came in my freshman year, most students of color would say there are no events,” he recalls. “They would say there are no events tailored to us, but no one actually did anything and just complained. I wanted to try to do something different and took that opportunity when I became president in my junior year. It's cool seeing how it exponentially evolved in one year.”

“I wanted to try to do something different and took that opportunity when I became president in my junior year. It's cool seeing how it exponentially evolved in one year ... I couldn’t have done this without the support of the rest of the BSU executive board and support from the school.” -Nde Aghanui Nkimbeng

BSU also received funding from several departments at WPI for the event, which was attended by President Laurie Leshin. The Worcester African Community Education Program also helped fund the event.

“I couldn’t have done this without the support of the rest of the BSU executive board and support from the school,” he points out.

Scott-Rawlins’s unapologetic collection featured powerful pieces representing themes of civil rights and equality including jean jackets with “fists” and quotes, including “Hands up. Don’t shoot.” Following her line, models came out in solidarity holding signs that read, “Women are the future,” “I’m not from a s***hole country,” and “You don’t have to be black to be outraged.”

The event, hosted by Clifford Owusu, also featured performances by Triplets Ghetto Kids, child refugees from Uganda, and the WPI Step Team; a concert by special guest Kranium, a Jamaican reggae and dancehall singer; and an after-party with DJ Famous.

Clarence Plant, advisor for the BSU who retired from WPI three years ago, said when he was first hired at WPI in 1985, there were only about three students of color on campus and the university president at the time, Jon Strauss, made a concerted effort to recruit minority students. “A lot of people were not on board,” Plant says. “WPI was, at one time, an all-male school. Then, they started bringing in females. When I got there, they started pushing for females and students of color. It was a struggle.”

That struggle was not unique to WPI at the time. Many colleges and universities across the country not designated “historically black colleges” were dealing with the same issues, he says.

Plant, who grew up in the segregated South, took a leading role in the transition at WPI, recruiting qualified people of color.

“We received pushback,” Plant explains. “We were told not a lot of minority students wanted to be engineers and did not have the ability to succeed. We said, ‘Not true. These people do exist.’ There were a lot of biases at that time.”

WPI has come a long way since, he says, with people of color playing key roles in administration and as part of the faculty and student population.

“The last two presidents at WPI, including the current president, pushed diversity hard at WPI,” Plant says. “It had to be pushed from the top and the president has to have support of the trustees to make it easier for her to do her job.”

At one time students of color had no place to go, he says, and he began a tradition more than 30 years ago that he continues of holding all-inclusive BSU biannual barbecues at his home up the street from WPI.

For the BSU’s fashion show and concert, Plant says the school came on board and “supported them 100 percent.”