What does it mean to be human? WARNER may hold some answers

Earlier this month, a European documentary film crew spent a few days on campus, notably in the Washburn lab that has served as the Atlas robot workshop, working on a documentary that will explore various aspects of human ability now being studied and developed in robots.

“We’re photographing and filming Atlas, who to us is the Holy Grail of humanoids,” Aguilera-Hellweg said between video takes. “It’s a documentary film for a French-German cable network about androids and humanoids that revolves around the question ‘What does it mean to be human?’

“I’m a photographer and filmmaker, and also an MD. I’ve been photographing surgery, and I am the author of a book of anatomical photographs, more of an art book than a medical book. And it has this same essential question: What doe s it mean to be human?”

The film is financed by, and scheduled to be aired on ARTE, a French/German 24-hour HDTV public access network. ARTE will broadcast the documentary in France and Germany and across Europe to their partner channels in the spring of 2015.

I get to photograph Atlas, which is pretty much the supreme humanoid in terms of bipedal motion at this size.
Max Aguilera-Hellweg

Matt DeDonato, WPI’s team leader for the Atlas team, will be the primary WPI robotics voice in the film, discussing humanoid robots and ongoing efforts to have them walk, climb, and run. He will also discuss why this is such a challenge in robotics science.

Atlas is a humanoid robot developed for DARPA by Boston Dynamics, to compete in DARPA’s Robotics Challenge. That program was created by DARPA to accelerate the development of advanced robots that can help respond to disasters like the Fukushima reactor accident in Japan. Such robots would do dangerous jobs and operate in places where people cannot safely work. They would need to work in environments and use tools made for people, drive vehicles that have not been modified, and negotiate rubble and other hazards associated with degraded environments.

Aguilera-Hellweg, who began his still photography career as an assistant to Annie Liebowitz at Rolling Stone, has worked forNational Geographic, LIFE magazine, and The New York Times Magazine, among others. He did his internal medical residency at UMass Medical School and has had a lifelong interest in the human body. He is the author of a book on surgical photos, The Sacred Heart: An Atlas of the Body Seen Through Invasive Surgery.

“I’ve worked for national magazines, and years ago I began photographing androids and humanoids for National Geographic,” Aguilera-Hellweg said. “And found that I was asking myself the same questions I asked myself when I was photographing human anatomy — Where do I reside? Am I in my heart, in my brain? You know, when I looked inside the human body, where is it that is me? 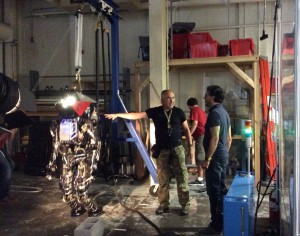 “And when I found myself photographing these advanced, brilliant androids and humanoids that you find in the research labs around the world that I was privy to, I found myself asking that very same question. I get to photograph Atlas, which is pretty much the supreme humanoid in terms of bipedal motion at this size. It’s an opportunity to ask questions about human motion and such.

“This documentary film is somewhat unique in that it’s a science documentary about these robots, but they’re using me as the protagonist interviewer who has a science background, but who can cross lines between asking these very basic science questions because I’m based in the scientific method. But also I am an artist, and have bigger questions to answer that scientists don’t normally address.”