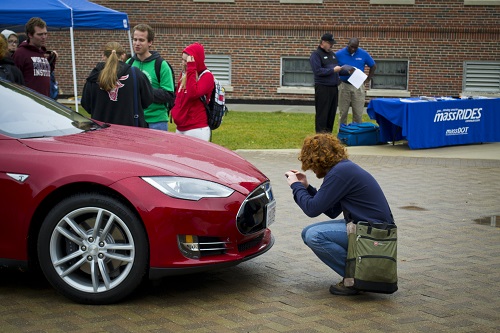 President Leshin’s Tesla Model S was the hit
of the show.

For the third year in a row, the WPI Student Green Team gave the community a chance to get an up-close look at a variety of sustainable vehicles at their Green Car Show last Thursday. The team took over one corner of the Quad from 10 a.m. to 3 p.m. to display seven vehicles, ranging from hybrid cars to an electric bus—although the highlight was undoubtedly a red Tesla owned by President Leshin.

The event was organized by Green Team members Meghan Dawe ’16, Maggie Russell ’17, Jacqueline Tedesco ’17, and Anna Valdez ’17. It sought to increase awareness of different types of sustainable transportation and educate people about available options for personal use as well as on campus and in the greater Worcester community.

“The Tesla is of the newest technologies in electric cars, and it’s exciting that President Leshin is bringing this innovation to campus” – Anna Valdez ’17

Attendees were able to ask questions and touch, and even sit, inside many of the vehicles. Students in particular were also eager to have their pictures taken next to Leshin’s Tesla, which is one of the first such vehicles campus. They also learned more about some of the Tesla’s unique features, such as door handles that retract to make it more aerodynamic and its ability to travel for up to 265 miles on one charge.

“The Tesla is of the newest technologies in electric cars, and it’s exciting that President Leshin is bringing this innovation to campus,” says Valdez.

Leshin agrees, adding, “This is the first car I’ve purchased in my role as president and I believe that it is a symbol of so many things that I care about, such as outstanding engineering, excellence in American manufacturing and, of course, sustainability.”

She also notes, “This purchase wasn’t purely altruistic. Consumer Reports stated that the Tesla was not just the highest rated electric car, but the highest rated car it ever reviewed. As an ‘early adopter,’ my hope is to support Tesla’s business philosophy, which is built upon the principal that the more vehicles it sells, the better its economy of operations, which will eventually make this car less expensive for consumers.” 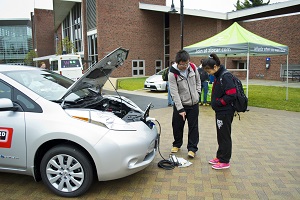 Visitors check out the charging system on
the Nissan Leaf.

Other electric cars at the show included a hybrid Chevy Volt owned by Deborah Bockus, assistant director for access services at Gordon Library, and a 100 percent electric Nissan Leaf brought by Milford Nissan, which is also offering a discounted purchase price to WPI community members through the end of October.
Dawe notes that while some of the electric vehicles may be out of price range for students at the moment, they can show their commitment to sustainability in other ways.
“We’re really trying to encourage students to go green, and save money, by using public transportation, taking advantage of car services on campus, and participating in ride sharing,” says Dawe.
Students at the show were able to learn about several sustainable transportation options from MassRIDES, an initiative of the Massachusetts Department of Transportation that provides resources for planning sustainable commutes. Car rental service Zipcar also came to the even with a Prius, which is one of five permanent vehicles available to WPI community members, along with a fuel-efficient Ford Focus.

The Worcester Regional Transport Authority also participated in the show for the first time and let attendees tour one of its six new electric buses. The all-electric, no emissions buses have only been on the road since March and comprise one of the largest such fleets in the nation.
Last but not least, local frozen yogurt store Wooberry brought a food truck to the show that not only helped draw passerby’s, but also informed people about the store’s sustainable business practices, including using natural ingredients from local sources, providing compostable containers and utensils, and purchasing energy from local sustainable energy plants.
Check out more pictures from the car show and learn about future events organized by the WPI Student Green Team on their Facebook page.