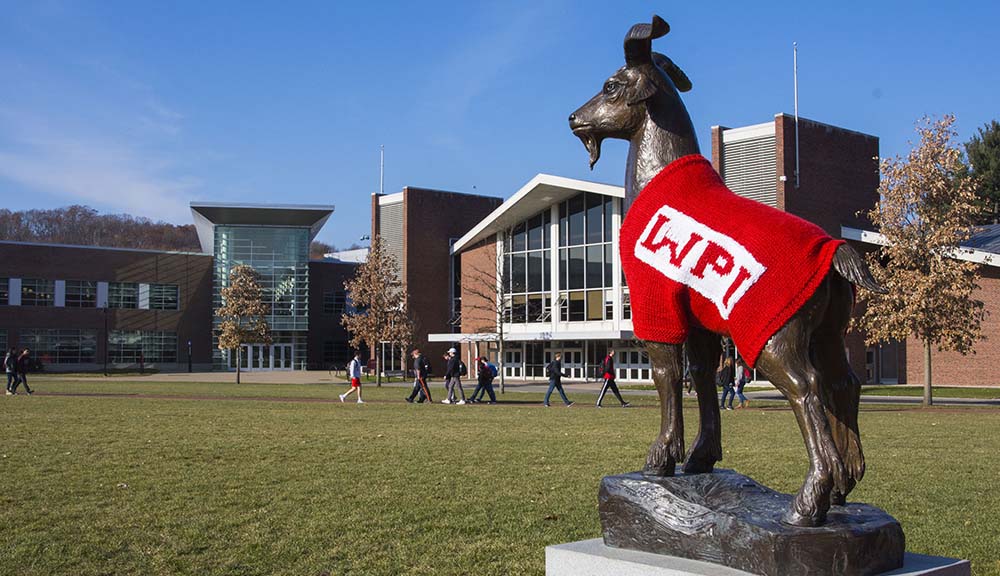 Sweater Weather for the Holidays

Everyone knows about the sweaters the Proud Goat statue on the Quad sports once the weather starts to get cold; they’ve become almost as popular as Gompei himself. Not only do they keep him warm and effortlessly stylish (there’s no denying the red really brings out his eyes), they also show off the handiwork of a group of women who have become honorary members of the WPI family.

The idea to give Gompei a sweater first came about a few years ago, when Paulette Tatro (Admissions Office)—inspired by the popular sweater-wearing Gompei enamel pins—suggested the idea to her mother, Gerry Bordage.

And what an idea it was—Bordage and her knitting group, a talented, incredibly endearing group of ladies known as the Golden Needles based out of the Leicester Senior Center, stepped up to the challenge without hesitation. They meet once a week to knit and socialize; over the years, in addition to their regular community service work, they’ve created three sweaters for Gompei, each one impressive enough to make Tim Gunn jealous.

Although it sounds like the start of a practical joke, Tatro says that when she first brought up the idea, she didn’t have any doubt that her mother and her fellow knitters would be up to the task.

“She’s made and done so many cool things, nothing’s a 'No,'” Tatro says with a laugh when asked if she really thought her mother and her knitting group would take the request seriously. “They’re always willing to do something for a cause. She’ll bring an idea to the drawing table, and they’ll just knit and crochet all day.”

The first sweater they designed was an intricate number with a collar and button, but over the years, the sweater design has evolved into more of a horse blanket that’s sewn directly onto the statue to avoid any future goat capers and to give Gompei a figure-flattering look.

“We were so excited, we had so much fun doing it,” says Golden Needler (and Bordage’s cousin) Joceline Vassar. “We got everybody involved.”

“We didn’t know it’d become as big as it has,” Bordage says, “but we’re glad the kids enjoy it.”

“I just love the connection of how it all started, and how it’s evolved over time. It’s definitely always a gift of love.” -Paulette Tatro

“Oh, it’s been a thrill,” adds Rena Doyle. “Especially at our age, it gives us a lot of pleasure making the kids happy.”

Just as Doyle is about to add another comment about what a wonderful time they all have working together, fellow knitter Pauline Jacques looks up from her latest project and interjects with a joking, “What do you mean, ‘our age?’ Speak for yourself, Rena!” that has the entire group laughing.

And, well, that about sums up what you can expect from an average Golden Needles meeting.

When they’re not designing the latest bovid fashion trend, the Golden Needles are busy knitting for several different community service initiatives and organizations. The Nazareth House, local nursing homes, and even WPI’s United Way auctions have been recipients of their hand-knit hats, mittens, shawls, lap blankets, and other items. Their latest project is knitting hats for students from Leicester High School before they leave on their class trip to Quebec. Yarn and other knitting supplies are regularly donated to the center, so it’s only fitting that the work is gifted back out to the community upon its completion.

“I just love the connection of how it all started, and how it’s evolved over time,” Tatro says. “It’s definitely always a gift of love.”

Plans for a new sweater Gompei can add to his wardrobe are already in the works, and with the holiday season coming up, it’s only fitting to wonder: If Gompei had an ugly holiday sweater, what would be on it?

From buttons, bells, and pom-poms to tinsel and pinecones, the Golden Needles have no shortage of ideas, so be sure to keep your eyes peeled for next year’s trendsetting look.