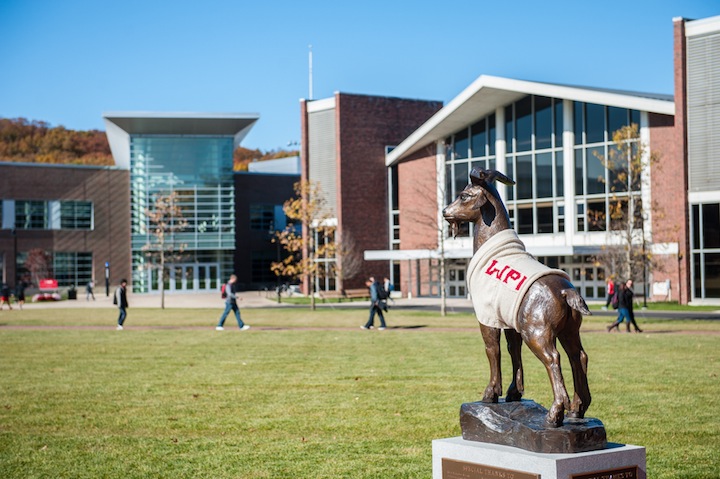 Perhaps you’ve seen it — the Proud Goat in the courtyard of the Bartlett Center wrapped in his newly knitted sweater. If you missed it, it’s because after only one month it was stolen over Homecoming Weekend.

Word of the theft spread rapidly throughout campus—as well as social media—demanding an immediate return of said item. The Graduate Student Government posted this on Facebook:  “If you are able to do so, please return the sweater to the statue or to the Admissions staff before Wednesday and there will be no questions asked. Currently, the footage from the camera atop of Morgan Hall is under review but will only be used if administrative disciplinary action is needed.” The post continued, “Poor Gompei—it’s cold out!”

The incident occurred sometime between Saturday night and Sunday morning, September 28-29. By Monday, the mysteriously missing wrap had been returned. 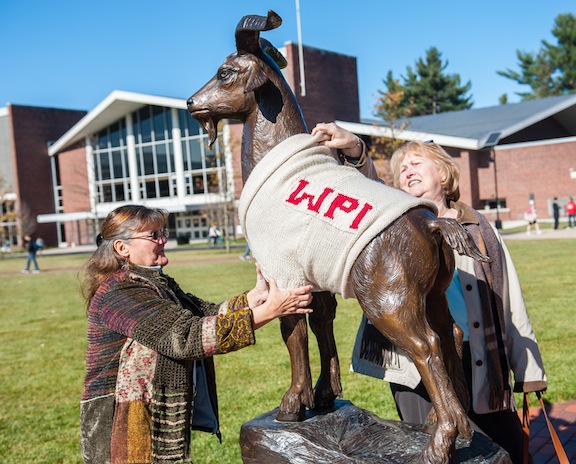 The sweater was created by a group of women from the Leicester Senior Center. They call themselves the Golden Needles, a knitting group who gather together once a week to knit and sew and socialize.

Three months ago they were asked to adorn the Proud Goat with attire for the coming cold weather.  It was a request they were both happy and honored to fill.

Paulette Tatro of Admissions was inspired by the popular Gompei pins, which depict the school’s mascot with a cozy sweater around his mid section.

Tatro thought, “Imagine if the Goat behind the Bartlett Center could wear a sweater similar to the pin?”

So she called her mother, Geraldine Bordage, a member of the Golden Needles, and asked:  “Can you knit a sweater for a goat?”

“In her French-speaking voice,” says Tatro, “my mother said, ‘Did you just ask me to make a sweater for a chevre?’ I laughed so hard and said, ‘Yes, Mom, a goat.’ Well, she took the project to the group and they decided to each knit a piece of the sweater. “

In the world of goat fashion, the sweater is absolutely haute couture. It’s an off-white number with two WPI logos emblazoned in red on its side. It’s pieced together in five sections, complete with a buttoned-down collar.

“It’s done in what they call stockinette stitch,” says Golden Needler Rena Doyle. “It was quite intricate making the letters. We spent at least three months on it. We do several projects together, like afghans and blankets for the homeless.  This is our first big project. We were very fortunate to be asked to do this for WPI.”

Barbara Paszuk is the Center’s outreach coordinator. “It was a big project for the group and they just enjoyed it,” she says. “They were all excited. They made several trips over to WPI for measuring. They created that by themselves.

“The group meets at the center for an hour and a half each week,” says Tatro. “But it’s funny, sometimes they say that they have to go home and do homework. They have so much fun.” 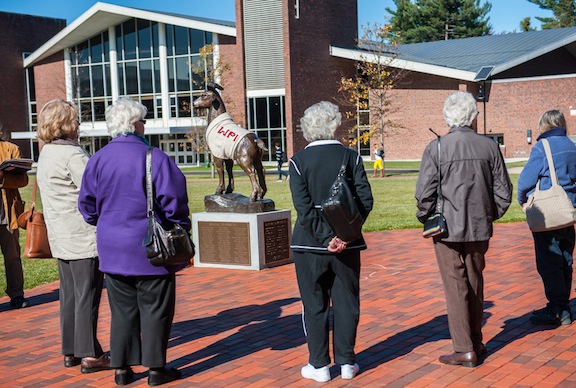 ​Tatro says the sweater was on the statue for less than a month. “I sent an email to the Student Life office and they sent this email to the student body looking for the sweater’s whereabouts: ‘If the sweater is returned, there will be no questions asked.’ It was returned the next day, with a note of apology, It started off as a joke and then they realized the sweater wasn’t easily accessed and they felt bad after they took it. The letter was signed, “A very apologetic student.”

The sweater was returned a little rough around the edges, but, as Tatro notes, “the Golden Needles worked their magic, and the Proud Goat is wearing his very regal sweater once again.” But this time, he comes with a zipper … just to be safe.

“It was a prank,” says knitter Jocelyn Vasseur. “That’s cool with me. He’s such an elegant goat. I think he needs a matching hat. What do you think?”

By the way, there’s an expression in the world of knitting called WPI, which means wraps per inch. As winter creeps in, Gompei will enjoy WPI for both meanings.