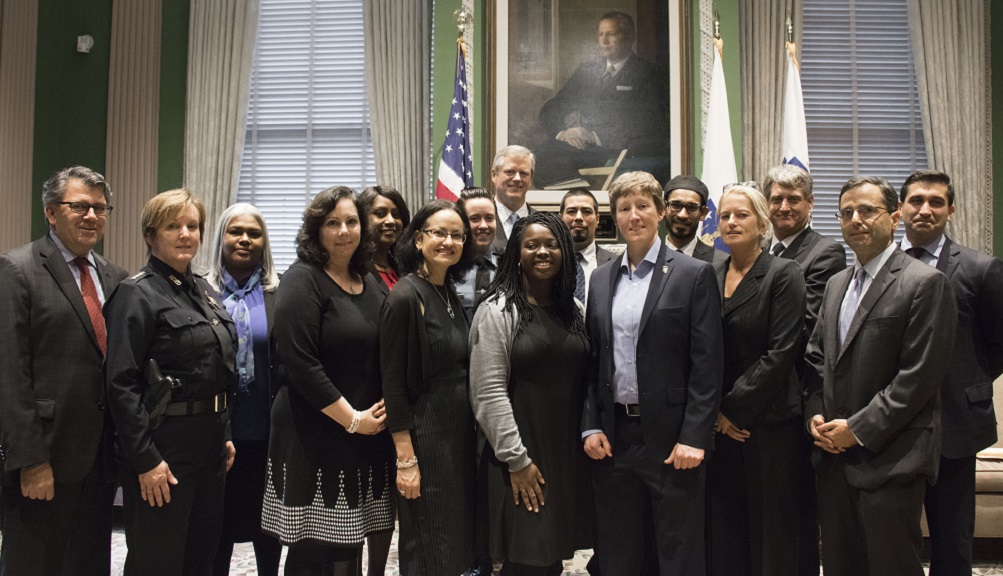 Photo Credit: Kristina McComb for the Office of the Governor

“This administration is very forward-thinking in assembling the members of this committee,” says Jones-Johnson. “We are a diverse group across all the work we do, across all sectors, and across all political parties. We hope to use our voices and experiences to make changes that will have a meaningful impact.”

According to a press release from Governor Baker’s office, former Governor William Weld initiated the original Task Force on Hate Crimes in 1991 to address the law enforcement’s effectiveness in responding to hate crimes and to give priority to the Hate Crimes Reporting Act. In 1997 former Governor Paul Cellucci formalized the task force to focus more attention on hate crimes and enforce prosecution of people who commit them.

“For me, it is about being part of a collective effort to make an impact,” says Jones-Johnson. “We all have different backgrounds but a common interest -to advance the commonwealth’s efforts. There are so many layers to this. There are some people who don’t feel like they have a voice. People say nothing and they suffer and think, ‘Is this the way it has to be?’ Our hope is to somehow provide that voice.”

The sharp rise in violent hate crimes and in the reports of crimes that are directly related to racist, anti-Semitic, anti-gay, and anti-immigrant sentiments revealed a new need to reinforce the state’s zero-tolerance policy for hate or violence. Given the current climate in the nation, Jones-Johnson says this is a time to bring something good out of negativity. “We want to take the energy and put it toward something positive and productive,” she says.

The commission will investigate the prevalence of hate crimes across the state and is tasked with advising the governor on how they can be prevented and how to best support those who are impacted by hate crimes. According to the Executive Order No. 578 on Reaffirming and Restructuring the Governor’s Task Force on Hate Crimes, a new commission function will also charge the group with developing best practices related to technical assistance to incorporate hate crime education into the curricula of interested school districts.

Educating the public is an important step to comprehending what hate crimes are and how to stop them. “People need to understand the prevalence of hate crimes and understand how people are impacted by it,” she says. The diversity on the task force will be an excellent launching point to understand how individuals might have experienced discrimination or a hate crime.

Noting her own recent experience with discrimination and behaviors that were consistent with a hate crime, Jones-Johnson recognizes how hate crimes target people in different ways and even how each task force member will bring their own personal nuances to consider. “We will have to even challenge our own beliefs,” she says. “There’s a lot coming at people in different ways. We all manage these experiences in our own way, but then have to process that meaning personally and professionally.

“We are looking forward to getting in a room and challenging our own beliefs to come up with something that is impactful for the commonwealth,” she says. “I am excited for the opportunity to do that.”