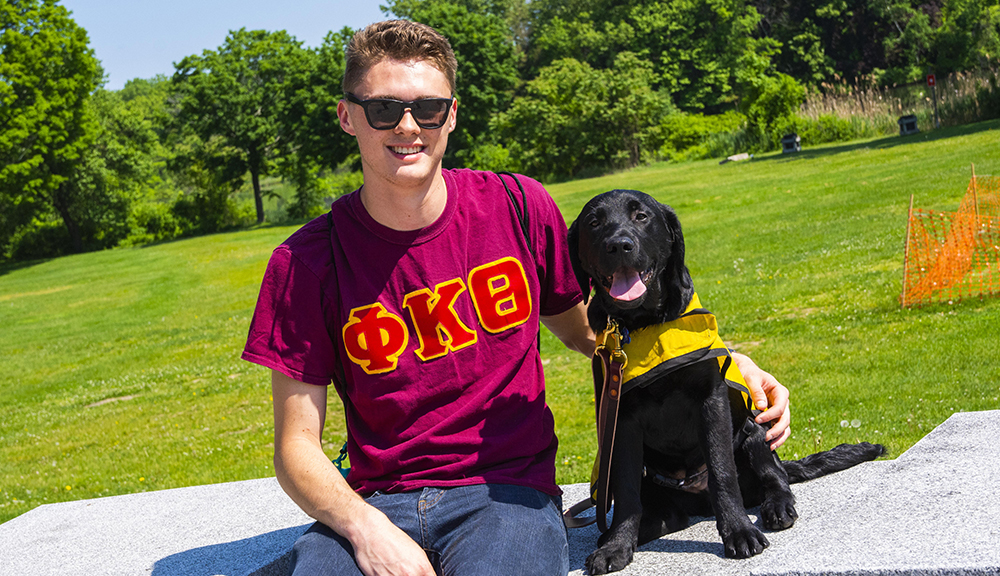 It’s a bit early for new members (or in this case, Friars) to start the rush process, but Phi Kappa Theta welcomed a new fraternity brother the day before Commencement, and he immediately became part of the brotherhood—even if he’s the only one in the house who’s not allowed to sit on the couch.

His name is Diesel, and he’s majoring in training to become a guide dog for the Guide Dog Foundation (with a double minor in taking naps and being ridiculously cute).

The brothers of Phi Kappa Theta had regularly mentioned in passing that they’d like having a dog in the house, but for a long time, there was no initiative to come up with a viable solution to actually get one.

“The general idea of having a dog is great,” says computer science major Jake Scheide ’19, who also serves as one of Diesel’s primary puppy raisers, “but the responsibility of having to actually take care of one is totally different.”

Other fraternities have adopted house dogs in the past, but the brothers quickly decided against that, with Scheide explaining, “That’s a 12-year commitment. People in the chapter 10 years from now might not want or have the capacity to care for a dog.”

Eventually, the idea of partnering with the Guide Dog Foundation to raise a guide dog puppy was brought up, and Scheide immediately latched onto it.

The Foundation provides people who are blind or visually impaired with highly trained guide dogs free of charge, and operates almost entirely from donations and volunteer work, something Scheide says he and his brothers are honored to contribute to.

“It’s an awesome initiative to be a part of,” he says. “It’s a win-win: we get a dog, and we get to help someone else at the end of the day.”

Of course, it wasn’t a simple “ask and ye shall receive” situation—the Kap house is owned by the fraternity’s alumni association, known as Aquinas. Their lease initially forbade pets, but starting in September 2017, Scheide offered his first presentation to Aquinas and his brothers about the benefits of raising a puppy.

Scheide left to complete his IQP in China a month later, but that didn’t slow the momentum—he continued to regularly call into Aquinas meetings to address insurance concerns, offer solutions, and reiterate positives—something, he says, the dedication of his Friar class built upon and drove forward as their way to benefit the chapter until, ultimately, they brought Diesel home with the unanimous approval of Aquinas.

While Scheide acts as one of Diesel’s primary handlers to help lead the training, all of the brothers pitch in from day to day in the hopes that they’ll begin a legacy of sorts within the Guide Dog Foundation, where future brothers have the option of raising their own guide dog and creating a recurring tradition.

Scheide is quick to cite the support and enthusiasm of the Guide Dog Foundation in their endeavor to raise Diesel. “They knew he was going to get all the socialization he needed from being in the house—they’re happy with how we’ve been progressing with him,” he says. “Hopefully having this little guy around campus will convince others to take on the role and become puppy raisers, and he’ll be the first of many at WPI.”

Meet Diesel, a guide dog in training for the Guide Dog Foundation.

There's a New Dog on Campus

It's easy to describe Diesel and how hard he's working to become the best guide dog he can be, but nothing beats seeing him in action for yourself.

Caitlin Donlan, assistant director of student activities, believes their experience will prove invaluable. “The chapter is undertaking a large commitment that will benefit the community, and an individual, in an enormous way,” she says. “I’m sure they’ll learn a great deal of life skills through the process, and I hope they ultimately become passionate about serving others through this project.”

Over the course of the year that Diesel will be with the Kap brothers, he’ll learn basic obedience, house manners and most importantly socialization so that he’s comfortable and confident in any type of setting while being trained or eventually with his handler. Scheide will take him to Foundation puppy classes twice a month and to public places five days a week, train him to stay at his knee and walk on his left side, and help him eventually differentiate between when he’s working and when he’s able to be a regular dog.

“He has to learn how to sit in the car or on the bus, and be very aware of everything," Scheide explains, "because when he’s guiding someone who is blind, he has to do it all, and just be a person, more or less.”

(Pro tip: Scheide and Diesel are regular visitors at the fountain, so keep your eyes peeled.)

“Diesel, can I talk to someone for five seconds without you trying to eat something?”

Diesel isn’t the only one learning during his time at the house—Scheide jokes that he’s had to train himself and his brothers just as much as Diesel.

“He figures things out,” he laughs. “It’s making sure we’re on top of things, and it’s a matter of us figuring out how to teach him and the best ways for us to learn.”

Once Diesel finishes his time with Phi Kappa Theta, he’ll move on to four to six months of training on Long Island, where it’ll ultimately be determined if he’ll become a guide dog, service dog, or take on a completely different role based on his strengths. Whatever Diesel ends up doing, the brothers will be invited to his graduation and get to meet his new owner.

That bright spot will help lessen the blow of what Scheide considers to be one of the toughest parts of the gig: eventually having to let Diesel go. As hard as that will be, though, there’s no hesitation in Scheide’s voice when he explains that, like the individuals he’s met through the Foundation—one of whom has raised nearly 15 puppies and seen them off to their new owners—he wants to be able to make a difference in the lives of others.

“It’s been a great experience so far. Lots of guys didn’t have pet dogs growing up or they do and they’re away from them now, so having Diesel around the house, it’s comforting.” Scheide pauses, then reaches down to scratch behind the ears of a lounging Diesel. “He raises everyone’s spirits. Even though he’s not a therapy dog, he definitely acts like one for us.”