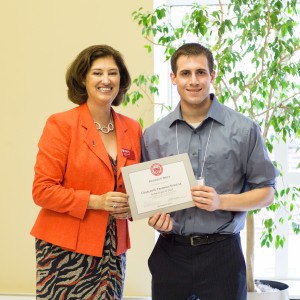 The first year of college can be a challenging time as students adjust to the rigors of course work and new experiences of campus life. Each year, WPI recognizes students who have gone above and beyond during their freshman year by earning all A’s and B’s. Designated as Charles O. Thompson Scholars, the students also have the chance to compete for a $500 scholarship by writing an essay about their journey so far at WPI.

On Monday, Sept. 8, WPI celebrated 254 Charles O. Thompson Scholars from the class of 2017—current sophomores who made impressive academic achievements last year. The event also recognized the essay contest winner and encouraged the students to keep up the good work.

Provost Eric Overstrӧm welcomed the students and noted that more than 20 percent of their class had made the cut not just by earning A’s and B’s, but by getting at least 6 A’s and no NR’s. 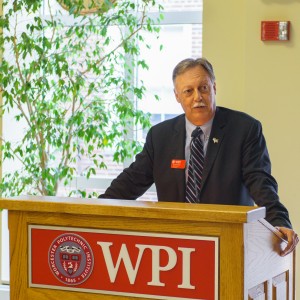 “That’s a pretty high bar to meet, and you should be incredibly proud,” said Overstrӧm. “Your first year is a major change, and to accomplish all that you have is phenomenal.”

Overstrӧm added, “We know that all WPI students are smart kids, but you are the wicked smart kids.”

President Leshin addressed the students next and spoke about the impact they have on WPI faculty and administrators, as well as their potential to impact the world.

“Students like you are the reason we get up in the morning—it’s so inspiring to interact with students who are clearly committed to both education and to making a difference,” said Leshin. “The world has great challenges, and we need all of your brains to help us solve them. I look forward to seeing all of the great things you will do during your time at WPI and beyond. You’re off to a great start!” 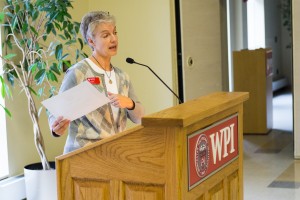 Before announcing the winner of the essay contest, Kris Wobbe, associate dean of undergraduate studies, gave a profile compiled from the 75 students who submitted essays. She noted that the students had achieved a 5:1 ratio of A’s to B’s, were from 16 countries and 21 states, and were involved in a wide range of campus activities, from playing in the African Percussion & Dance Ensemble, to joining multiple sports teams, to running for student government.

The essay winner, designated as the Outstanding Member of Class 2017, was selected by a panel consisting of Wobbe, dean of undergraduate studies Art Heinricher, and professor of history Tina-Marie Ranalli. While the field was competitive, they ultimately chose Richard O’Brien, a mathematical sciences and management major who is a member of the WPI basketball team, president of his Residence Hall Council, and big brother with Big Brothers Big Sisters of Central Massachusetts.

“There were so many outstanding students and it was an extraordinarily difficult choice,” said Wobbe. “We chose Richard not only for his academic and extracurricular achievements, but also for his thoughtful and creative essay about how he had to buy a big eraser to erase all of the mistakes he has made and start again.” 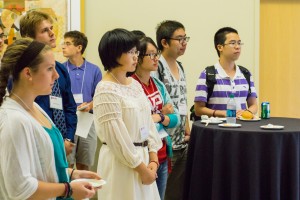 While he credited much of his success to learning from mistakes, O’Brien also acknowledged the supportive community at WPI.

“Before college I didn’t look past the idea of attending class and playing basketball,” he said. “But at WPI they encourage you so much to be part of the community that I found myself joining a lot of different activities. Now I realize that while it’s great getting good grades, the most rewarding experiences often happen outside of the classroom.”